LEESBURG, Fla. — If Wisconsin anglers Pat Schlapper and Wade Rickey had started today’s opening round of the Bassmaster Team Championship using sturdier fish hooks, they likely would have a considerably heavier weight than the 22-pound, 3-ounce limit they carried to the weigh-in. 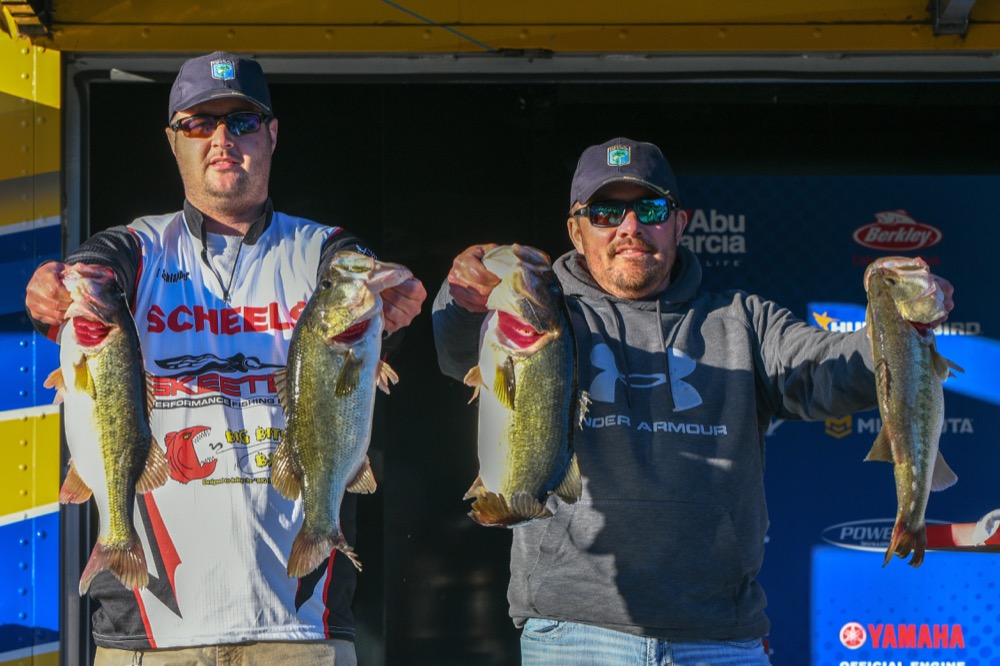 Still, that limit of five bass was enough to put the Wisconsin tandem atop the leaderboard heading into the second and final day here on the Harris Chain of Lakes in central Florida.

Schlapper and Rickey had never fished in the Sunshine State, and they believed 3/0 hooks would be enough to boat the hefty Florida bass they hoped to catch. But when they did stick big bass early on Wednesday, the fish literally straightened those hooks and slipped away.

Frustrated, but undeterred, Schlapper and Rickey switched to beefier 4/0 hooks, and they started putting big bass in the boat. Rickey’s 6-pounder was the largest, and the duo rounded out their bag with a quartet of solid 4-pounders.

Schlapper and Rickey, who fish with the Major League Series back in Wisconsin, are 10 ounces ahead of the Anglers Choice team of Virginia’s William Samples and North Carolina’s Charles Purcell, who are second with 21-9. Brothers Travis and Shannon O’Quinn of Team Morristown Marine are in third place with 20-8; Eddie Levin and Ryan Mallory of the Ohio B.A.S.S. Nation Team Trail are fourth (20-6); and Dean Alexander and Tom Martens of the Texas Bass Nation Team Trail are fifth (19-15.)

“We’ve never been fishing down here, so we didn’t know what to expect,” Schlapper said. “We lost some nice fish, but we ground it out. We only fished that one spot, and we stopped fishing it hard about 10 a.m.”

Schlapper and Rickey said they found big bass on another half dozen spots they scouted in practice, but they’re not sure those places will be unoccupied when they arrive Thursday morning. The duo was, however, aboard the 151st of 197 boats to launch today. Since the takeoff order is inverted on Day 2, they’ll get an earlier start on Thursday.

“I’m confident we’re around some fish,” Schlapper said. “But not having fished here before, I don’t know which community holes we’re around. We didn’t see anyone else fishing like we were, but (a few boats saw us fishing) and got an education this morning. If one of them is ahead of us, we might come in with nothing.”

Duos from 35 different states and three foreign countries (Australia, Canada and South Africa) are competing in the Team Championship. Each team consists of two anglers trying to amass a shared five-bass limit in the team portion of the championship.

The tandem with the heaviest two-day combined weight will be crowned team champion after Thursday’s weigh-in, and also will win a Nitro Z20 boat and Mercury 225 Pro XS boat/motor combo valued at $42,000.

Brisk winds swept across central Florida on Wednesday which made moving around the Harris Chain rough on competitors. Still, anglers such as Alexander and Martens were among those who benefited from the weather, which featured temperatures in the upper 50s and clear skies to go with steady winds from 10 to 15 mph.

“(The wind) put us into a little funk, but we had a good morning,” Martens said.

Alexander caught an 8-2 largemouth that was one of three bass to qualify for the TrophyCatch Florida program on today. Adam Elliot caught a 9-4, and Tennessee’s Nobuyuki Terajima had the big bass of the day with a lunker that tipped the scales at 10-10. It was almost 3 pounds heavier than his previous best — a 7-12 he caught on Kentucky Lake.

Terajima didn’t offer details on how he caught the big bass, which earned him a $500 prize, but he did say he was worried at one point that he and his partner, Doug Castro, were in for a tough day.

“We were struggling,” Terajima said. “We had no fish at 11 (o’clock.) We moved to a new location and I got this one. I wish I could catch one more like this tomorrow. No one can tell.”

Anglers no doubt will be look for those types of bites again Thursday.

Following the Team Championship round, members of the Top 3 teams will move on to the Team Championship Classic Fish-Off, also on the Harris Chain, where they will compete individually for the final berth in the 2019 Bassmaster Classic presented by DICK’s Sporting Goods. That tournament, the most prestigious and storied in all of competitive bass fishing, is scheduled for March 15-17 in Knoxville, Tenn.

Anglers will launch Thursday at 6:45 a.m. ET from Ski Beach Park in Leesburg. The final weigh-in for the team portion of this tournament will begin at the same location at 2:45 p.m. ET.

The Greater Orlando Sports Commission is hosting the tournament with the assistance of Florida’s Lake County.