Poured with a low-density soft plastic material, the clear colors and back of the Deps Frilled Shad are made with 0% salt content while the ventral or belly side contains only 10% salt content. The fan-shaped lip above the head acts as a brake to slow its movement through the water and allow anglers to use a steady retrieve to spontaneously generate the trembling side-to-side rolling action. Perfect when rigged weightless or paired with a lightly weighted jig head, the Deps Frilled Shad remains high in the water column to make it exceptionally effective when fishing submerged rocks, grass, or specific targets.

Get he DEPS Frilled Shad here.

Las Vegas, Nev. – October 13, 2021 – They say there is no substitute for experience. For Major League Fishing pro, Roy Hawk, the 2015 WON Bass U.S. Open Champion and veteran of many national events on the former FLW Tour, Bassmaster Elite Series and now the Bass Pro Tour, experience made all the difference on the final day of the 2021 edition of the West’s most prestigious bass tournament. 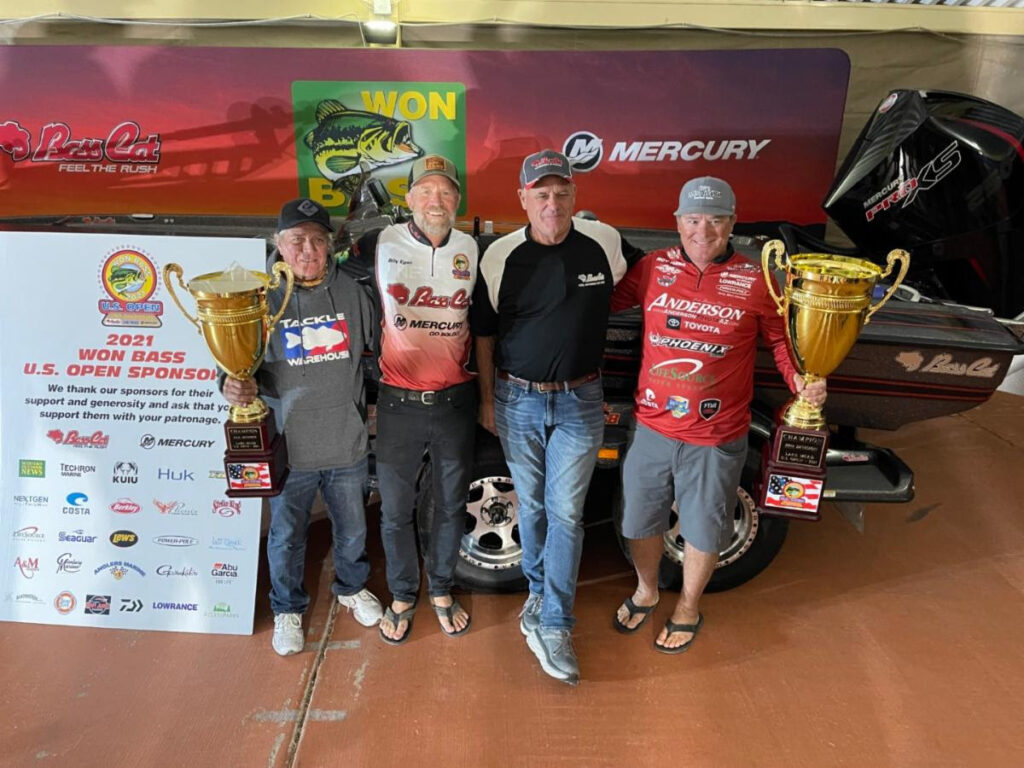 Starting the day in 12th place with a respectable 10.12 pounds, 1.69 pounds behind day one leader Rusty Salewske. Being a veteran of desert events, Hawk proved that consistency is key in the U.S. Open, as 11 pounds a day has historically given an angler a shot to win.

Hawk gave himself that opportunity when he plopped 11.62 pounds on the Callville Bay scales to bring his winning weight to a two-day total of 21.74 pounds. For his victory, Hawk received the keys to a 2021 Bass Cat Cougar FTD powered by a Mercury Pro XS 250 Four Stroke outboard valued at $64,000 and $83,000 in cash prizes.

Both days were tough fishing for Hawk, who spent his entire tournament fishing main lake areas near the Callville Bay – like when he won in 2015. “It was really tough fishing,” said Hawk. We only caught five keepers on the first day and six keepers on day two. We threw jigs and dropshot rigs on main lake points and just managed to scrape up enough to hold on.”

Hawk lassoed a 4.68-pound largemouth on day two that wound up being the big bass of the event. He caught he fish on a jig that his friend Chris Kinley hand makes. “We call it ‘My Jig’ and it really works well for me,” he said. “I put a Yamamoto Psycho Dad on there as a trailer, and that’s what she bit.”

Hawk said that he was very pleased with the outcome. “I’m super stoked to be standing here having won a second time,” he said. “I am just so thrilled to be here and be able to enjoy this with my wife and son, this is a real big deal for our family.”

Hawk outlasted Cliff King, who started the day in fifth place with 10.50 pounds. King produced another solid 10.53-pound limit to bring his total weigh to 21.03 pounds to finish in second place. He was followed in third by Gunnar Stanton with 20.47 pounds for two days, Tom White in fourth with 19.63 pounds and day one leader Salewske finished fifth with 19.53 pounds.

On the AAA side, day one leader David Shearrer who fished with Salewske on day one,drew out with Hawk on day two, and ran away with the AAA Division with 23.43 pounds. Shearrer said he had a great tournament. “I had a great time and drew two really good anglers who had really good days,” he said. “We caught schooling fish on day one, and fished deep on day two with Roy, I had a really good time and can’t believe this has happened.”

The live weigh-in broadcast of the 2021 WON Bass U.S. Open by Bass Cat Boats and Mercury was brought to you by Life Source Water Systems from Callville Bay Marina access the archives and tournament information at http://www.wonbassevents.com, and on the WON Bass Facebook page.

BIRMINGHAM, Ala. — B.A.S.S. officials announced the slate for the 2022 Bassmaster Opens Series, with nine tournaments in three divisions covering nine states as the pathway to some of the most-coveted invitations in all of professional bass fishing. 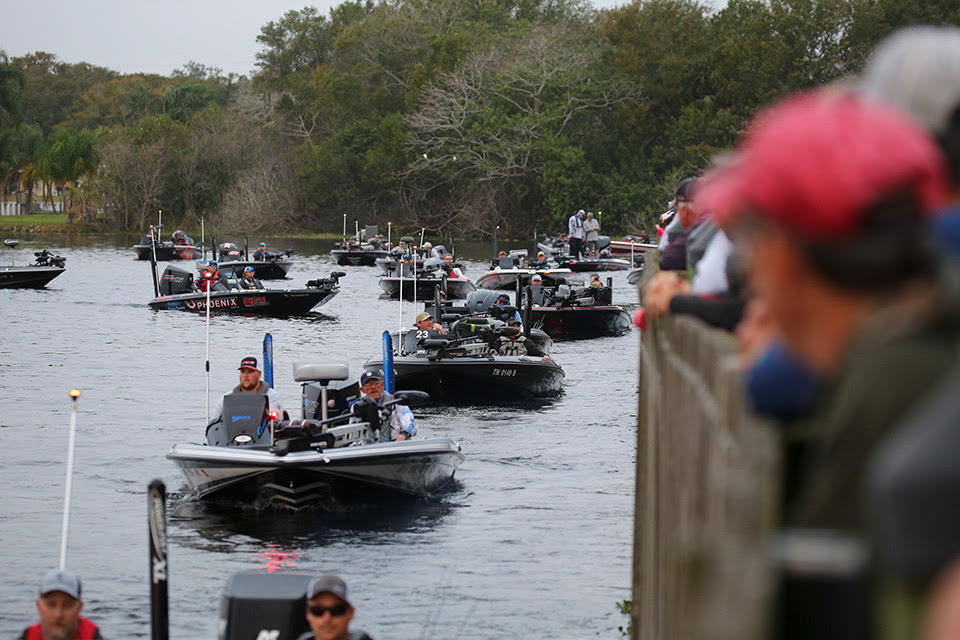 After starting late in 2021 due to the COVID-19 pandemic, the Opens schedule will return in 2022 to a late-winter start date with the first tournament, a Southern Division event, set for Feb. 3-5 on the Kissimmee Chain of Lakes in Kissimmee, Fla.

From there, the Opens will wind through Tennessee, South Carolina, Mississippi, Louisiana, Texas, Virginia, New York and Maryland.

“Interest in the Opens from both anglers and fans has been at an all-time high the past few seasons,” said B.A.S.S. chairman and CEO Chase Anderson. “The excitement is only growing as Opens anglers enjoy success on the Bassmaster Elite Series. In fact, 2020 Opens Angler of the Year Bryan New won his first Elite event in February this year on the St. Johns River. The competition has been intense, and we’re thrilled to spotlight the future stars of our sport.”

The winners of all nine Opens will earn a berth into the 2023 Academy Sports + Outdoors Bassmaster Classic presented by Huk, provided they have fished all three events in the division where their win occurred. In addition to Classic berths, the Top 3 anglers in every division and the Top 3 in the Falcon Rods Bassmaster Opens Angler of the Year overall standings will receive invitations to fish the 2023 Bassmaster Elite Series.

“Twelve anglers will earn the right to fish professionally — to live their dreams on the most prestigious professional tour in bass fishing,” Anderson said. “And just like Chris Jones, who finished third at this year’s Bassmaster Classic as an Opens qualifier, nine anglers will have a chance at instant stardom in the Classic.

“Those are the things that will be on the line every time anglers take off for an Open.”

Starting the season in Florida has become a tradition for most of the major trails at B.A.S.S., and the Kissimmee Chain of Lakes has been a favored destination of late. The organization’s most recent visit there was for a 2020 Eastern Open that was won by New.

B.A.S.S.’s most recent visit to Cherokee was for a 2020 Eastern Open won by Kentucky pro Matt Robertson, while Hartwell is a common B.A.S.S. destination that is scheduled to host the iconic Bassmaster Classic for the fourth time, March 4-6, 2022.

The trip to the Red River will be the first one for B.A.S.S. since the 2018 Central Open won by South Carolina pro Patrick Walters. Most notably, the fishery was the site of the Bassmaster Classic in 2009 and 2012.

“Shreveport-Bossier City is excited to host the 2022 Bassmaster Open on the Red River,” said Kelly Wells, executive director of the Shreveport-Bossier Sports Commission. “We look forward to providing world-class hospitality for anglers and their families here in Sportsman’s Paradise! We also want to give a special thank you to the Red River Waterway Commission for co-hosting this incredible event.”

The Northern Division slate will include visits to the James River in Richmond, Va., April 14-16, Oneida Lake in Syracuse, N.Y., July 7-9 and the Upper Chesapeake Bay in Cecil County, Md., Sept. 8-10. The latter tournament will mark B.A.S.S.’s first visit to the Chesapeake since a 2015 Elite Series event won by Alabama pro Aaron Martens.

“We are thrilled to be hosting a prestigious Bassmaster Open tournament in Cecil County’s Upper Bay waters,” said Cecil County Executive Danielle Hornberger. “We consider Bassmaster anglers to be VIPs and look forward to showcasing the best of Cecil throughout their visit. Competitors and fans can expect to find beautiful scenery, vibrant small towns and fabulous Chesapeake Bay inspired cuisine while exploring Cecil County, Maryland.”

As in the past, the full field will compete the first two days before the boater side is cut to 10 anglers on Championship Saturday. The co-angler champion will be crowned after the Day 2 weigh-in.

“It’s always nice to have a good mix of fisheries that are familiar to us and places we haven’t been to in a while,” said Opens Tournament Director Chris Bowes. “We definitely have that with the 2022 schedule — and we have a diverse collection of fisheries that will test the versatility of our anglers.

“That always makes for a great tournament season.”

In 2022, FOX Sports will continue to broadcast live coverage from Championship Saturday of each of the division final tournaments on FS1 and the FOX Sports digital platforms.

About B.A.S.S.
B.A.S.S., which encompasses the Bassmaster tournament leagues, events and media platforms, is the worldwide authority on bass fishing and keeper of the culture of the sport, providing cutting edge content on bass fishing whenever, wherever and however bass fishing fans want to use it. Headquartered in Birmingham, Ala., the 515,000-member organization’s fully integrated media platforms include the industry’s leading magazines (Bassmaster and B.A.S.S. Times), website (Bassmaster.com), TV show, radio show, social media programs and events. For more than 50 years, B.A.S.S. has been dedicated to access, conservation and youth fishing.

The post Bassmaster Opens Will Feature Nine Events In Nine States During The 2022 Season appeared first on Bass365.com.

Fully Loaded Front Deck – October What You Need to Throw

Fall is here and we caught up with five pro anglers to get their thoughts on what you should have on your front deck this month! 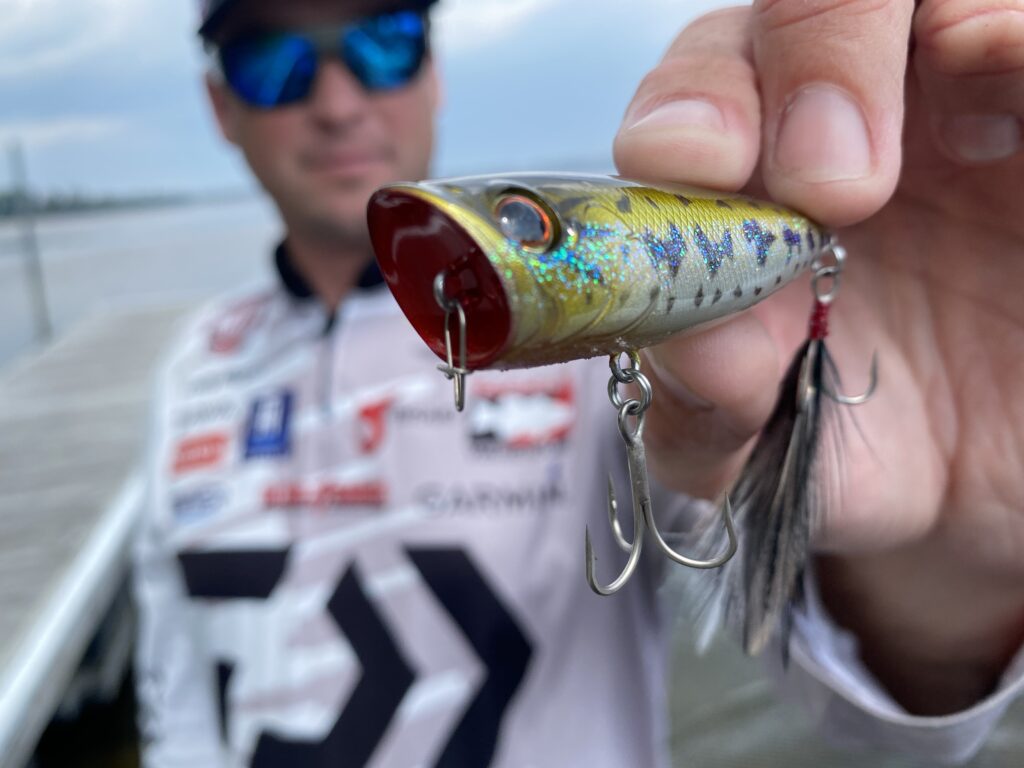 What:  A popper-style bait. The “O.B.” is very easy to fish! There are two ways I prefer to use the Ones Bug: Like a traditional popper, and like a walking bait.

Where:  Fish it like a traditional popper, throwing it around structure. Or fish the O.B. in open water and on long points as a walking bait when smaller bait is present.

Get the Evergreen O.B. here. 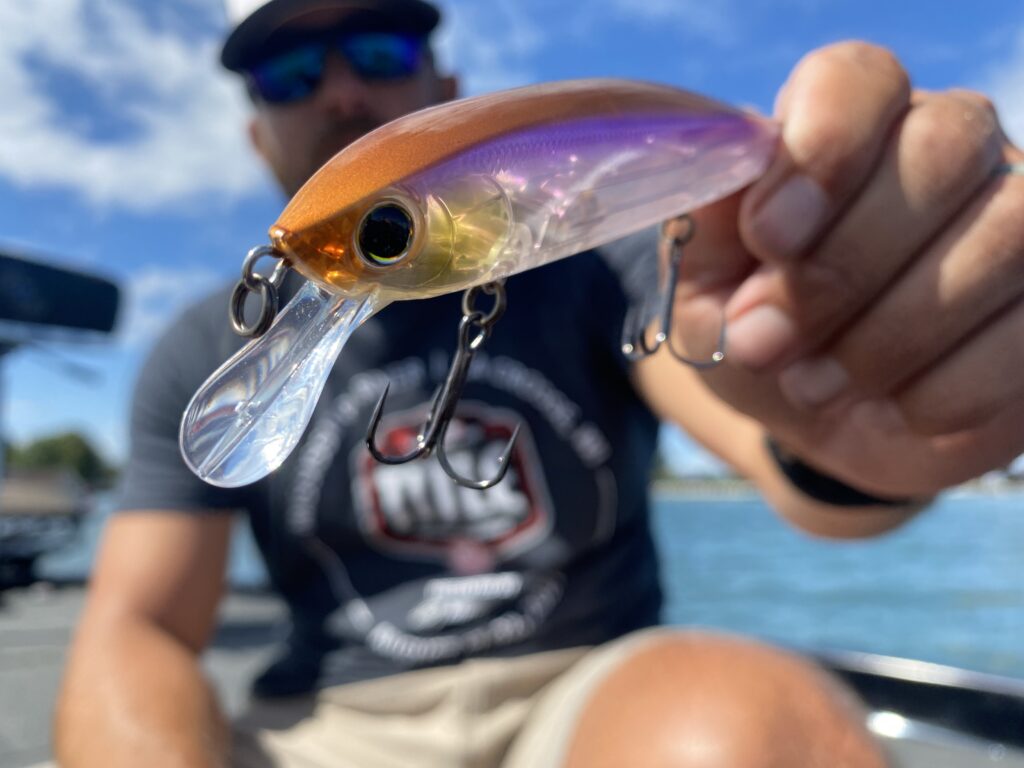 What: Jerkbaits are fast becoming a year-round choice for many anglers. Zack Birge says one of his favorites is from Hardcore. The Minnow Flat 130sp is the perfect choice for fall fishing, and the new magnetic weight transfer system allows for super long casts and comes in a variety of fish-catching colors.

Where: The Minnow Flat is great for covering water, throw it along sloping points and transitions. It’s also very effective around boat docks this time of the year.

How: Make long and vary the cadence of your retrieve, the fish will tell you what they want!

Get the Minnow Flat here. 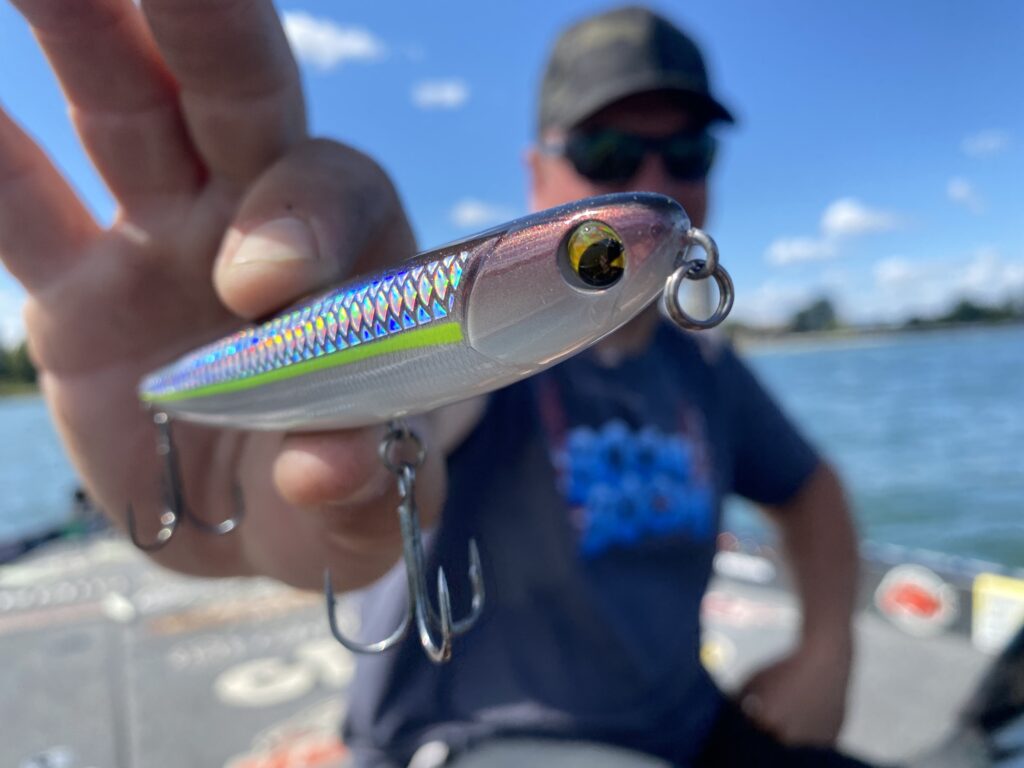 Where: Throw the Skimmer in the back of shallow pockets to catch fish that are feeding.

Get the IMA Skimmer here. 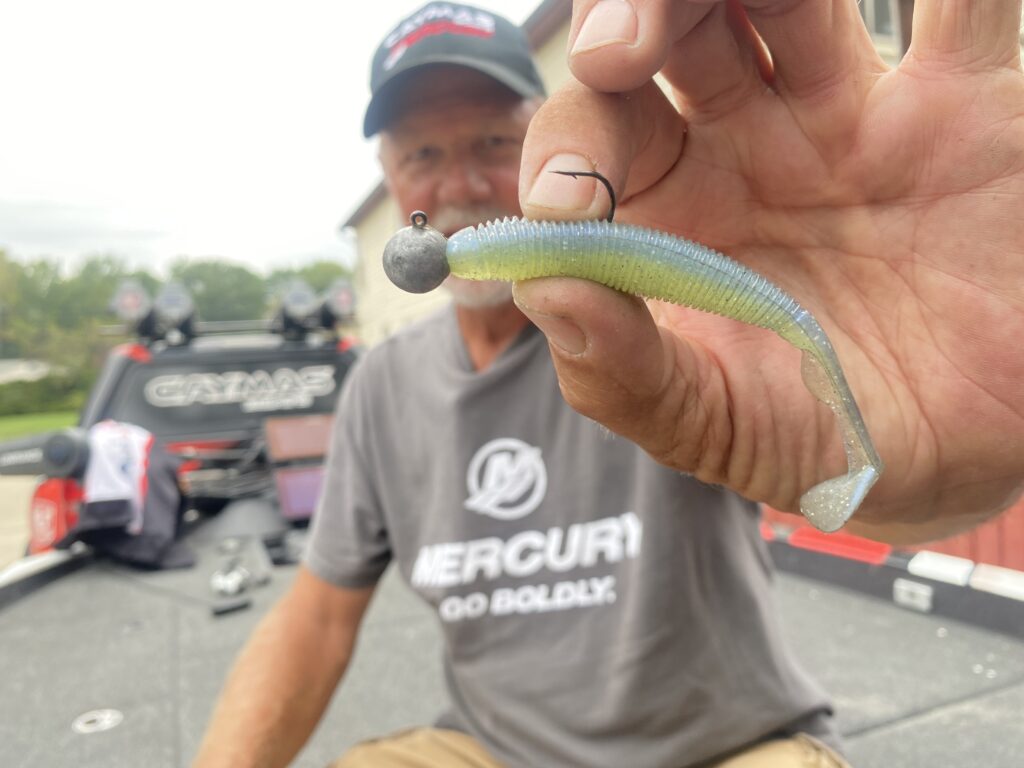 What: New from Duckett Fishing, the Subtle Tail is a soft swimbait. When you’re faced with the need for a small swimbait, this is one you’ll need to try. The unique thin-tail design works perfectly on a slow subtle retrieve.

Where: Fish flats and shallow pockets and stick to the shad colors this time of year.

How: Cast as far as you can and wind it back very slowly. Use a 1/4-ounce or 3/8 ounce head on 10-pound fluorocarbon line.

Get the Subtle Tail here. 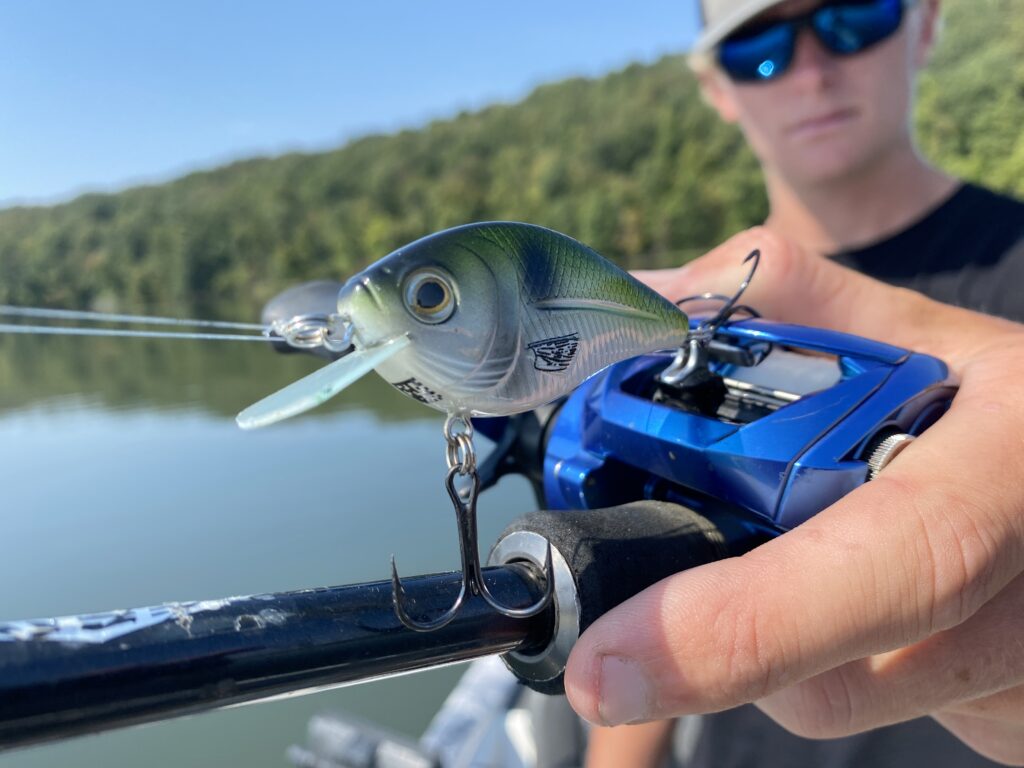 What: Laker Howell chooses the Livingston FlatMaster SQ for fishing over grass in the fall. The EBS Technology and a tighter wobble are the perfect combination to trigger hard-to-catch fall bass.

Where: Fish the FlatMaster over the top of grass beds and the edges of trees or docks,

How: Hit the top of the grass, it rips free from easily and deflects off of wood without a problem.

The post Fully Loaded Front Deck – October What You Need to Throw appeared first on Bass365.com.