Who Will Win the Bonus Bucks 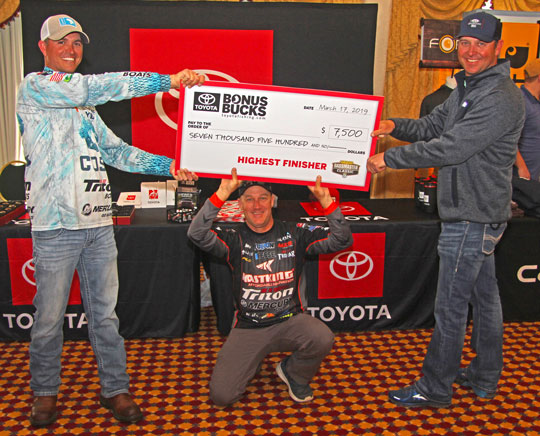 A huge number of Classic competitors tow with a Toyota, and are eligible to win, including Casey Ashley, Brent Chapman, and Todd Faircloth. All three signed up for Bonus Bucks, and could add the sizeable $7,500 fringe benefit from Toyota to the $300,000 first place prize from B.A.S.S. should they become the 2019 Bassmaster Classic Champ.

Ashley, Chapman, and Faircloth talked about why they love Toyota, and how they’d spend the $7,500 should they win this Classic in Knoxville.

Why have you been loyal to Toyota for so many years?

Ashley: The first vehicle I ever drove as a teenager was a 1988 Toyota, and as a pro I won nearly enough money the first year I was signed-up for Bonus Bucks to pay for a Tundra.

Faircloth: I believe when a company supports our sport as generously as Toyota has for so many years, it’s our responsibility as anglers to support them in return.

What are your favorite qualities of a Toyota Tundra?

Ashley: It pulls like crazy, and as long as I keep the gas tank full and fresh tires on it, I don’t have to worry about mechanical failures.

Chapman: Low maintenance, and it pulls my boat as well as a diesel.

Faircloth: It tows great, and I have a great relationship with my local Toyota dealer.

If you win the 2019 Bassmaster Classic, and pick up the $7,500 Toyota Bonus Bucks check, what are you going to spend it on?

Ashley: An asphalt driveway for the house I’m building.

Chapman: A tractor to build deer hunting food plots, and also to use on the 20 acres we’re about to build a house on.

Faircloth: It would be spent on all sorts of things related to a whitetail deer lease.