Terry “Big Show” Scroggins is a character. The Florida pro painted cars for 16 years in the family auto body biz, loves to pour his own soft plastic lures, build his own fishing rods, and grill meat for his buddies. Plus, he’s filled with a Tundra full of timely one-liners that will make you howl with laughter. 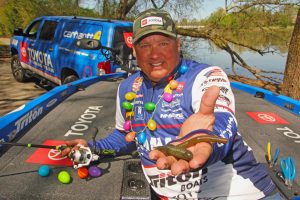 One of his best: “If I tell you it’s Easter, you’d better hide your eggs.”

Well, it’s Easter time. And Scroggins is dishing out non-negotiable truths about how to catch spawning bass about the same time Peter Cottontail comes hopping down the bunny trail.

Be aware and buy good eyewear

“The first step to catching bass around the spawn is taking time to know if the fish in your area are pre-spawn, spawn, or post-spawn. Around my house in Florida, bass start spawning in late January and February, but in New York it could be June. So you have to pay attention, and know if bass are actually on the beds or not,” says Scroggins.

“If you know for certain fish are spawning, then buy the best pair of polarized sunglasses you can afford, and look for beds in super shallow water in the backs of creeks, flat bays, and shallow pockets. But you need to realize not all beds look the same, based on the bottom substrate and water clarity. Some spawning beds look almost orange, while others can look tan or white, and some look nearly black,” says Scroggins.

“If you’re fortunate to spy a big bass on a spawning bed, don’t assume you need 20-pound line and a baitcasting reel to catch her,” says Scroggins. “I catch 90% of my spawners with a spinning reel spooled with light line, and a 7-foot medium action rod from Mud Hole. Not only can you finesse the lure better on spinning tackle, but lighter line is less detectable to finicky spawners.”

These three lures are all you need

“A lot of times you have to offer a single spawning bass a variety of lures to make her bite. It’s crazy how the same fish will snub their nose at one lure, but turn and attack a different lure on the next cast,” he says. “If you have a tube, a wacky rigged 5” Senko, and a skinny 6” straight tail worm, there’s a really strong chance that fish will eat one of those three,” says the Toyota pro.