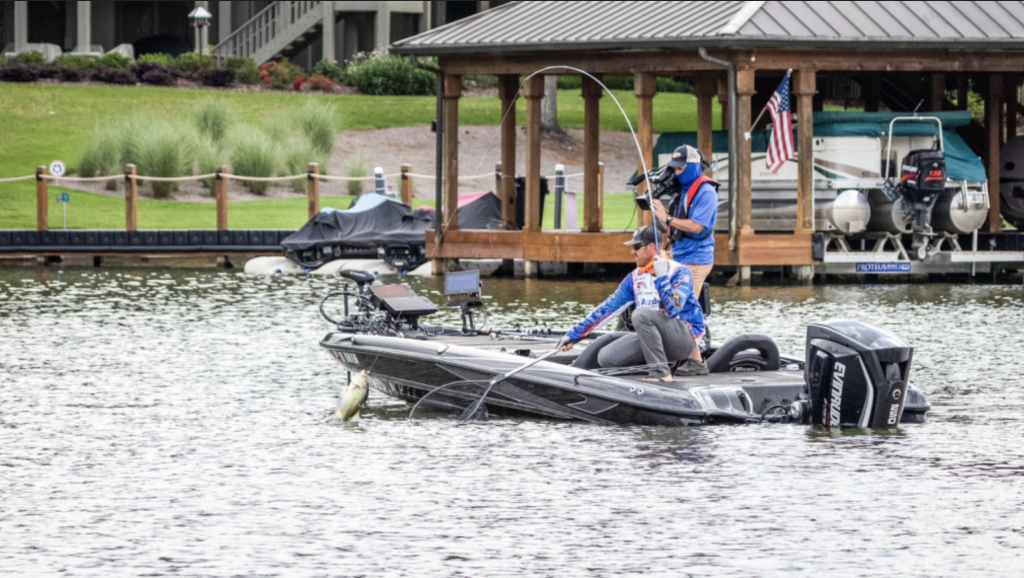 Although Wheeler’s weight on the scale was 27-12, he was credited with 25-12 after being assessed a 2-pound penalty for accidently making a cast with six fish in his livewell. After catching a 10-pound largemouth, Wheeler placed it into his livewell and quickly jumped up to make another cast. The problem was that Wheeler already had a five-bass limit. Wheeler made one cast before realizing his mistake, and did not catch a fish, but the Tennessee pro was assessed a 2-pound penalty and allowed to cull out his smallest fish.

“When you catch one that big, you get a little flustered,” Wheeler joked on the weigh-in stage. “I was so excited to make another cast. As soon as I fired it out there, I was like ‘Gosh, dang it. I’ve got six in my livewell.’ I immediately called (Tournament Director) Daniel Fennel and I knew I was getting a 2-pound penalty. I was so mad at myself for making that error, I used it to motivate myself to go out and catch even more than what I had.”

Other than the penalty, it was a near flawless day for Wheeler on the water Thursday as he caught the largest limit of the tournament. After spending the first two days of the tournament bouncing back and forth between shallow and deep water, Wheeler spent day three mainly offshore.

“It was an awesome day out there on the lake,” Wheeler said. “Yesterday I had 10 to 15 places shallow, but today I spent most of my time deep. I had some stuff in my back pocket that I was sort of saving, and I still have some stuff that I saved shallow where there should be some big ones.

“I’m going out tomorrow with the mindset that I’m going to have to catch a really big bag,” Wheeler said. “It’s so easy here for someone to catch a 10-pounder and put together a 30-pound limit, so I’ve got to catch another 20+ pounds. If I lose, I lose, and I leave it out on the water, but for me, my goal is to keep catching 20.”

The top 10 pros advancing to the final day of competition Friday on Lake Chickamauga are:

Finishing in 11th through 30th are:

Overall there were 237 bass weighing 678 pounds, 3 ounces, caught by 50 pros Thursday. Of the final 50 pros, 44 of them were able to bring a five-bass limit to the scale.

The Tackle Warehouse Pro Circuit at Lake Chickamauga is hosted by Fish Dayton and the Rhea Economic & Tourism Council.

In Tackle Warehouse Pro Circuit Super Tournament competition, the full field of 204 pro anglers competed in the two-day opening round on Tuesday and Wednesday. The top 50 pros based on their two-day accumulated weight advanced to Thursday. Now only the top 10 pros will continue competition on Championship Friday, with the winner determined by the heaviest accumulated weight from the four days of competition.

MLF pros competing in the Pro Circuit Super Tournaments will fish for prize money only. No points will be awarded toward any championship or title to MLF competitors. Only the original Tackle Warehouse Pro Circuit anglers will compete for the AOY title throughout the remainder of the season. AOY points in the final events will be awarded based on Pro Circuit anglers finishing order. The top-finishing FLW pro will receive “first-place points” regardless of where he finishes in the overall standings, and so on.

The top 10 anglers will take off at 6:30 a.m. EDT Friday from Point Park at Dayton Boat Dock, located at 185 Chickamauga Drive, in Dayton. Friday’s Championship weigh-in will also be held at Dayton Boat Dock and will begin at 3 p.m. To minimize the spread of COVID-19, attendance is limited to competing anglers and essential staff only. Fans are encouraged to forgo the daily takeoffs and weigh-ins and follow the event online through the expanded “FLW Live” broadcasts and weigh-in coverage at FLWFishing.com.

The popular FLW Live on-the-water broadcast has been expanded to air on all four days of competition, featuring live action from the boats of the tournament’s top pros each day. Host Travis Moran is joined by Toyota Series pro Todd Hollowell and MLF’s Marty Stone to break down the extended action Friday from 8 a.m. to 2 p.m. On-the-water broadcasts will be live streamed on FLWFishing.com.

About FLW
FLW is the world’s largest tournament-fishing organization, providing anglers of all skill levels the opportunity to compete for millions in prize money across five tournament circuits. Headquartered in Benton, Kentucky, FLW and its partners conduct more than 290 bass-fishing tournaments annually around the world, including the United States, Canada, China, Italy, South Korea, Mexico, Namibia, Portugal, South Africa, Spain, and Zimbabwe.

FLW tournament fishing can be seen on the Emmy-nominated “FLW” television show while Bass Fishing magazine delivers cutting-edge tips from top pros. Acquired by Major League Fishing in late 2019, FLW is expanding its programming in 2020 to the Outdoor Channel and the Sportsman Channel as well as on-demand at MyOutdoorTV (MOTV).