Kevin VanDam and Jacob Powroznik have both won recent Bassmaster Elite Series events on Toledo Bend. And reigning Toyota Bassmaster Angler of the Year, Gerald Swindle, recently finished second on the giant reservoir – all three graciously provided insight on what fans can expect at this year’s event. 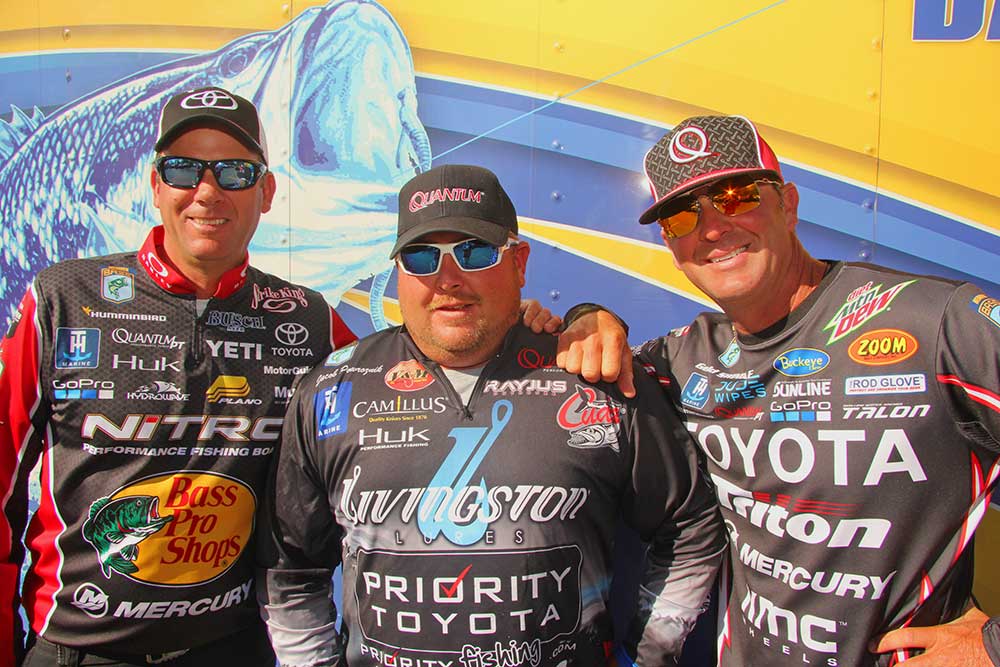 1.) Will the majority of the anglers who earn a paycheck in this tournament be fishing shallower or deeper than 8-feet of water?

2.) This reservoir recorded 139 largemouth of 10-pounds or greater in the Toledo Bend Lunker Bass program last year. How many bass 10 pounds or greater will we see weighed-in during this Elite Series tournament?

VanDam – I’ll say none. It’s post spawn and they’re skinnier. I weighed-in three fish in the 8 to 9 pound range last year when I won, but none that were 10 pounds or bigger.
Powroznik – I’ll say none.
Swindle – Zero

3.) Choose three anglers other than yourself for a Bassmaster Fantasy Fishing team here at Toledo Bend.

VanDam – Guys that are great at catching them off spawning beds like Powroznik, Rojas and Alton Jones
Powroznik – Bill Lowen, Greg Hackney and Dean Rojas
Swindle – Todd Faircloth and Scott Rook, because both of them will drag a Carolina-rigged lizard around until the legs fall off it, and I’ll say Shaw Grigsby too.

4.) The Masters Tournament is being played at Augusta this weekend. Do you play golf, and if so what’s the lowest score you’ve ever shot.

5.) We’ve been to Toledo Bend several times in recent years. What do you like most about Toledo Bend?

VanDam – Crawfish boils
Powroznik – All the versatility it offers in terms of fishing patterns that work here.
Swindle – The campground where Lulu and I stay is real nice and real close to the launch ramp.