A cold 50-degree drizzle couldn’t chill Kevin VanDam’s attitude as he launched for the final day of practice at the Bassmaster Elite Series tournament at Cherokee Lake in East Tennessee, but stress levels are heating up like a bowl of white sausage gravy in the foggy East Tennessee air. 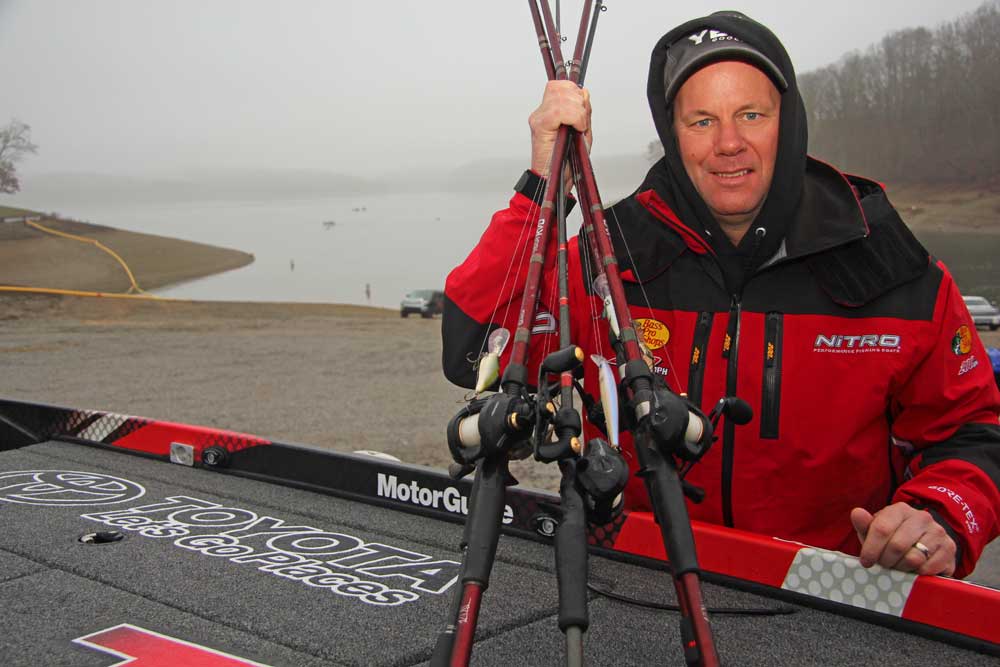 For starters, this is the first Elite Series event of the 2017 season. Naturally, nobody wants to dig himself a hole capable of burying the season’s goodness right out of the gates.

Secondly, the weather here has been like a roller coaster ride you might find 30 minutes from the boat ramp down at Dollywood.

The one consistency is thick fog, but while high temps have been in the 60s so far – the bottom drops out for Day 1 of competition. Most of Thursday will be near freezing or below with strong bone chilling north winds.

And then, there’s the fish. Mostly smallmouth, with a well-earned reputation for changing their minds like … well … the weather.

Tennessee Is Not Michigan

“Great Lakes smallmouth behave way different than these Tennessee fish,” says VanDam. “The smallmouth I grew up catching eat a ton of crawfish and gobies, they find a reef that’s got food on it, and stay fairly local, but these fish down here live primarily on shad, and every time that school of shad moves, the Smallmouth move too.”

Cherokee is no small pond at 28,000+ surface acres, but it’s not exactly Lake Michigan either. And while wind is the main weather factor for angling natives of The Wolverine State, it’s largely Holston River current controlled by the Tennessee Valley Authority that stirs the pot here.

“You definitely have to contend with changing current here, and while this place is not exactly small, there’s no doubt fishing pressure affects these fish,” says the Team Toyota angler with seven Bassmaster Angler of the Year Titles to his credit.

Not really. But as he pulled his rain jacket hood over his head and strapped down a pile of Smoke HD reels, you’d have sworn he was Reynolds Wolf of The Weather Channel.

“It’s foggy and chilly today, but tomorrow is the one you’ve gotta be ready for – 24 degrees in the morning, with a high of only 40 – and the worst part will be the sustained 15 to 25 mph North winds,” warns VanDam.

“I’ll layer-up, and trade this ball cap for a beanie, but the bottom line is, this one is gonna be a grind – a real stress sandwich.”