BURNSIDE, Ky. (Nov. 2, 2019) – Strike King pro Andrew Upshaw of Tulsa, Oklahoma, brought a five-bass limit to the stage weighing 12 pounds, 15 ounces, Saturday to claim the title of 2019 FLW Series Champion at the Costa FLW Series Championship on Lake Cumberland. Upshaw, with a three-day total of 15 bass for 42 pounds, 15 ounces, won by a 1-pound, 10-ounce margin over second-place angler Rob Burns of Plano, Texas, who caught a three-day total of 15 bass weighing 41-5. Upshaw led the championship tournament on the final two days of competition and took home the top prize of $50,000 plus a $2,500 Mercury Marine contingency bonus. 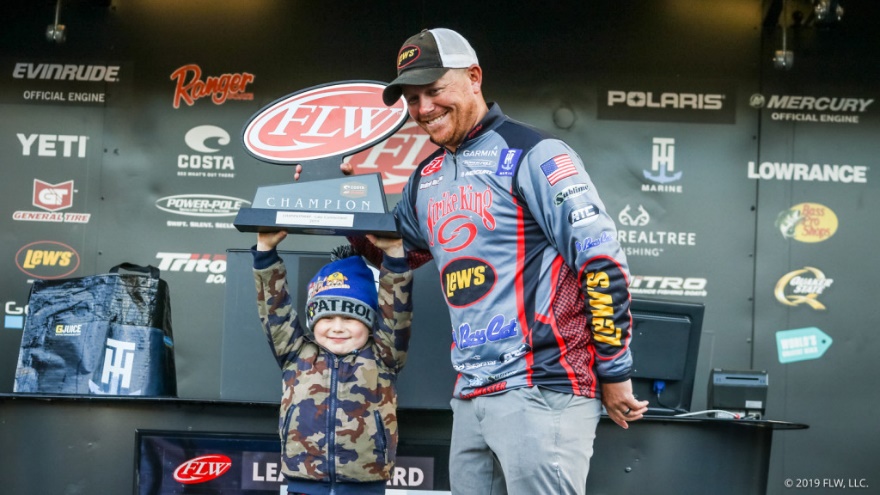 Saturday’s final weigh-in marked the finale of the 2019 FLW Series, which featured thousands of anglers from across the globe competing in 15 events across three divisions.

Upshaw said that his main pattern that he figured out was targeting main-lake transition bluffs that, “Had to have the river-channel swing on it. Not just a transition, but a swing.” He had found 15 different spots, from Conley Bottom down.

“This lake is absolutely full of smallmouth and I’ve always said that if you’re not catching them consistently, then you’re not doing the right thing,” Upshaw said. “So, during practice, I’d just run around and find areas where I was consistently finding a bunch of bites. I had about 15 spots – some of them didn’t ever fire like they did in practice, but some did better.”

Upshaw mentioned four baits as catching most of his fish this week. He caught a couple of bass each on a buzzbait, a football-head jig and a Ned rig – a Strike King Ned Ocho worm (green-pumpkin) with a 1/8-ounce Gene Larew Ned Rig Pighead. He said the majority of his keepers came on a 3/8- and 1/2-ounce Strike King Bitsy Flip Jig with a Strike King Baby Rage Craw (green-pumpkin).

“The first day they were eating it on the drop,” Upshaw said. “As soon as you flipped it up there they were just swimming off with it, right on the bank. Yesterday they kind of shifted out a little bit, and today they were even deeper.

“I was fishing the jig anywhere between 5 and 14 feet. I’d let it free fall on slack line and then let it just gradually fall down the bluff. I feathered it all the way down and that’s when they’d eat it. It was a timing deal – anytime between 10 (a.m.) and 3 (p.m.) is when they would really bite.

“I love catching fish, and I absolutely love these Kentucky and Tennessee smallmouth,” Upshaw went on to say. “They are the best, and they’ve made me a lot of money this year. I’ve been to Lake Cumberland a couple of times on Tour and fell in love with it. I couldn’t be happier to win again, on this lake.”

The top 10 pros at the 2019 Costa FLW Series Championship on Lake Cumberland finished:

The top 10 co-anglers at the 2019 Costa FLW Series Championship on Lake Cumberland finished:

The 2019 Costa FLW Series Championship at Lake Cumberland was hosted by the Somerset Tourist & Convention Commission and the Burnside Tourism Commission. The three-day, no entry fee tournament featured a field of 386 boaters and co-anglers from across the five U.S. FLW Series divisions and multiple international anglers from countries that compete in the FLW Series.

FLW is the world’s largest tournament-fishing organization, providing anglers of all skill levels the opportunity to compete for millions in prize money in 2019 across five tournament circuits. Headquartered in Benton, Kentucky, with offices in Minneapolis, FLW and their partners conduct more than 290 bass-fishing tournaments annually around the world, including the United States, Canada, China, Italy, South Korea, Mexico, Namibia, Portugal, South Africa, Spain, and Zimbabwe. FLW tournament fishing can be seen on the Emmy-nominated “FLW” television show while FLW Bass Fishing magazine delivers cutting-edge tips from top pros. For more information visit FLWFishing.com and follow FLW at Facebook, Twitter, Instagram, and YouTube.