ATHENS, Ga. (Jan. 7, 2017) – The 2017 YETI – FLW College Fishing season will kick off January 14th at Lake Seminole for the first of three regular-season stops in the Southeastern Conference. A full field of college teams will be competing for a top award of $2,000 and a berth into the 2018 College Fishing National Championship. The UGA Bass Anglers will be represented by: 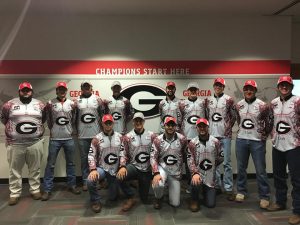 The UGA Bass Anglers have seen exponential growth in the club since last season, growing from just 7 members in Fall of 2015 to now 23 active members before the season opener. The team plans to send five to seven boats to each tournament in the coming months as they fish competitively on three college trails. In the offseason, the anglers set their focus on building a team of sponsors that will help them excel on the water this coming season. With the acquisitions of major companies such as Quantum, ALX Rods, Zoom Bait Company, SIMMS, and Lowrance to the UGA Bass Anglers, the team feels confident for a successful season. In addition to sponsors, the team acquired their own unique logo to identify themselves from the rest of UGA’s club sport teams. As a result, the team was able to fundraise selling team t-shirts on their Facebook Page. Team president Jordan Parisian says “We hope to continue to grow as a team throughout the season every way we can. Whether that is in members, financially, or in general support from our fans, it won’t happen unless we perform on the water. It’s about time we get back on top.”

On the January 14th, at Lake Seminole all anglers will take off from Bainbridge Earle May Boat Basin, located at 100 Boat Basin Circle in Bainbridge, at 7:30 a.m. EST Saturday. Weigh-in will be held at the marina beginning at 3 p.m. Takeoff and weigh-in are free and open to the public.

This event is hosted by the Bainbridge Convention & Visitors Bureau. We hope to see you there, and GO DAWGS!