KISSIMMEE, Fla. (July 11, 2017) – The U.S.A. Bassin-sponsored duo of Richard Patterson, Dave Smith along with media representative Glen Cabezas from AnglerGear.net, won the third annual ICAST Cup presented by FLW bass-fishing tournament on Lake Toho Tuesday morning after bringing a five-bass limit to the scale weighing 20 pounds, 7 ounces. For their victory, the duo each earned trophies to take home and the title of ICAST Cup Champions. 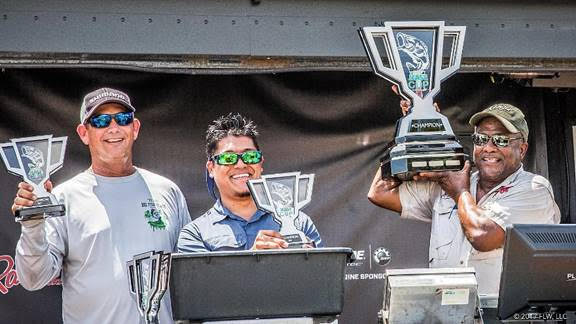 The event marked the annual kickoff of ICAST, the largest sportfishing trade show in the world. The tournament launched out of Big Toho Marina in Kissimmee, Florida, and featured a record field of 69 teams competing for bragging rights and to raise money for the KeepAmericaFishing™ foundation. Each company that sponsored a boat donated a minimum $200 entry fee to the foundation in order to compete. After the final fish had been weighed Tuesday, $14,000 was raised for the KeepAmericaFishing™ foundation.

“This was my third time fishing (the ICAST Cup) and I’m glad to be here,” says Cabezas, who is the chief content provider for AnglerGear.net. “It was a great day and really showcases what the lake is capable of.”

His partners of Patterson and Smith are locals who fish plenty of tournaments on Toho and help run the U.S.A Bassin Toho Division.

“I nicknamed our team ‘hammer and two nails’ today,” laughs Patterson. “We caught our fish early and then around 8:30 or 9 o’clock it started to slow down. That is when we thought things might be going pretty well.”

“We rolled up on a waypoint this morning and doubled on a 4- and 6-pounder right away,” adds Smith. “It was a great time. When the fishing slowed down, we just slowed down with them.”

The trio targeted clumps of grass with a lipless crankbait, vibrating jig and a Texas-rigged big worm.

The top 10 teams finished the tournament in:

Complete results and photos from the tournament will be posted at ICASTCup.com.

KeepAmericaFishing™ is leading the fight to preserve your right to sustainably fish on our nation’s waterways. As the voice of the American angler, KeepAmericaFishing works to keep our public resources – our oceans, lakes, rivers and streams – open, clean and abundant with fish. For more information, please visit KeepAmericaFishing.org.

For more ICAST 2017 coverage, details and tournament information visit FLWFishing.com. For regular updates, photos, tournament news and more, follow us on Facebook at Facebook.com/FLWFishing and on Twitter at Twitter.com/FLWFishing.