The greatest professional bass angler of all time got his start while casting topwater lures at summertime bass as a young teenager while walking the shoreline of School Section Lake where his grandparents lived in Central Michigan. 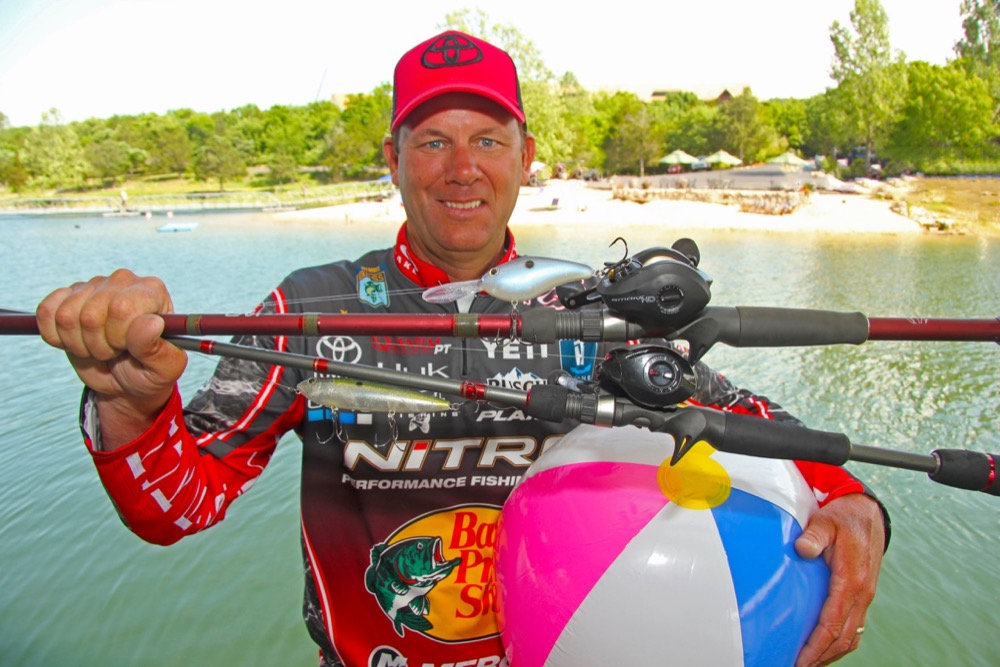 Not much has changed in 40 years for Kevin VanDam. When asked recently to choose just two lures all anglers should consider having in their summer arsenal – he chose a topwater walking bait and a deep diving crankbait.

“Topwater was my thing back in those days, from Jitterbugs to buzzbaits, and now it’s a 4.5” KVD Sexy Dawg topwater that I’ve always got tied-on in summer,” says the 7-time Toyota Bassmaster Angler of the Year. “The thing is, no matter how hot it gets, there’s always a few bass shallow that are willing to hit a topwater at sunrise or sunset in the summertime.”

One tip that might surprise a lot of anglers regarding VanDam’s topwater tactics is his insistence on always using 40-pound braided line. He says braid helps the Sexy Dawg ‘walk’ a little better on the surface, and even more importantly, leads to far firmer hooksets at the end of a long cast, as opposed to monofilament.

VanDam spools his braided line to a fairly speedy 7.3:1 gear ratio Quantum Smoke S3 reel. The compact reel features a larger spool to hold more line that leads to longer smoother casts. He uses a 7’ 4” TourKVD rod with a soft and forgiving enough tip to make sure bass get a good grip and stay hooked when they smash his surface lure.

As the day heats up, and topwater action is likely to fade, VanDam ties on a deep diving crankbait that has earned him hundreds-of-thousands of dollars – a Strike King 6XD that will dive to depths of 20-feet on 12 pound line.

This lure allows the career long Quantum pro to dig depths on main lake points and deep aquatic vegetation where fat bass are likely to live in mid summer — and to do so at a fairly efficient pace compared to a heavy jig or large plastic worm.

In lakes where the water is pretty clear he likes the color “Blue Gizzard Shad” when cranking a 6XD – and if it’s dingier, he leans mostly on the color he made famous – “Sexy Shad.”

Either way he ties them to a long 7’ 10” TourKVD rod that allows him to launch the lure as far as possible, which in turn maximizes its diving depth on the retrieve. And much like it’s tough to tow a large bass boat with a sports car, when deep cranking, he reaches for the Toyota Tundra of baitcasters – the large spooled 5.3:1 Quantum Smoke HD.

VanDam no longer spends a lot of time walking the shores of School Section Lake casting Jitterbugs, but he absolutely loves sharing time on the water in the heat of summer away from the Elite Series by meandering various Michigan waterways in the family’s Regency pontoon. Of course, the pontoon is rigged to be fishing friendly for he and sons Jackson and Nicholas – and there’s typically a topwater tied-on within arms reach, even when he’s just chillin to beat summer’s heat.