Tube Jigs, a Tractor, and Two Bonuses for Christie

An hour after Jason Christie was done towing a green pumpkin tube around in 19-feet of water to win the $100,000 Advanced Auto Parts Bassmaster Elite Series on Lake St. Clair, he stood next to his boat and truck at the Metropark boat ramp and talked about towing a tractor around back home in Eastern Oklahoma. 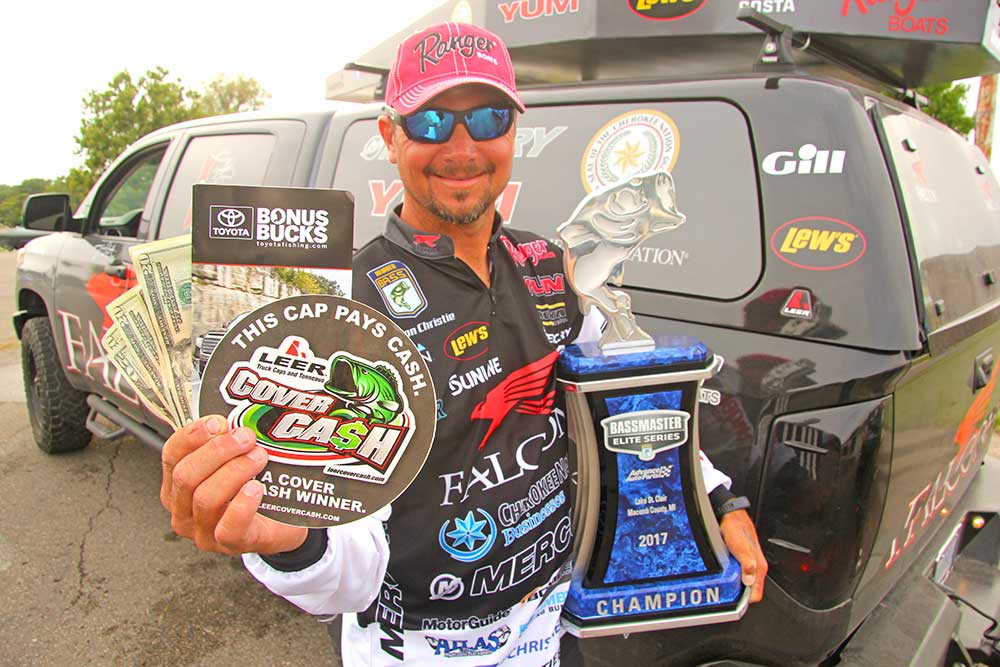 “I drive a Toyota Tundra for two reasons; for a chance to win the Bonus Bucks as a tournament fisherman, and because of their towing power,” stated Christie. “In fact, I kept the older Tundra that I used to tow my Ranger with after I bought this newer one — and now I use the older truck to hunt with, and to tow my Mahindra tractor.”

As a result of being the highest finishing registered participant, the Lake Tenkiller, Oklahoma resident got paid $3,000 from Toyota’s Bonus Bucks Program.

Christie is also loyal to Leer Truck Caps, and both his Tundras not only have a Leer truck cap, but also a Leer Locker ceiling mounted storage system. “I use the Leer Locker in my tournament truck to carry hats, fishing tackle and the trusty little fan that I’ve gotta have to sleep. In my hunting truck I carry my bow, and the kids’ hunting rifles,” says the 5-time B.A.S.S. tournament winner, and former college basketball player.

In addition to the Toyota Bonus Bucks, Christie also won a $500 bonus from the Leer Cover Cash program.

You don’t have to be a full-time pro, or even win a tournament to win the “Cover Cash” or “Bonus Bucks” – you just have to be a registered participant in any of the dozens of tournaments sanctioned by both contingency programs and be the highest-placing participant. To get signed-up, please visit http://www.toyotatrucksbonusbucks.com/ and  http://leercovercash.com/ or phone Jessica or Kendell at (918) 742-6424, and they can also help you get signed-up for either program.