As Cody Millican and John Cook idled through morning ‘boat check’ prior to throttling down in the 6th Annual Toyota Bonus Bucks Owners event, Millican told top pro Gerald Swindle, who was emceeing the event, that if he and Cook won – he was taking Swindle’s jacket home.

Swindle, being a good sport, agreed – and by day’s end, had to present Millican with not only his jacket, but a check from Toyota for $5,000 at the No Entry Fee event for registered Bonus Bucks members on Table Rock Lake. 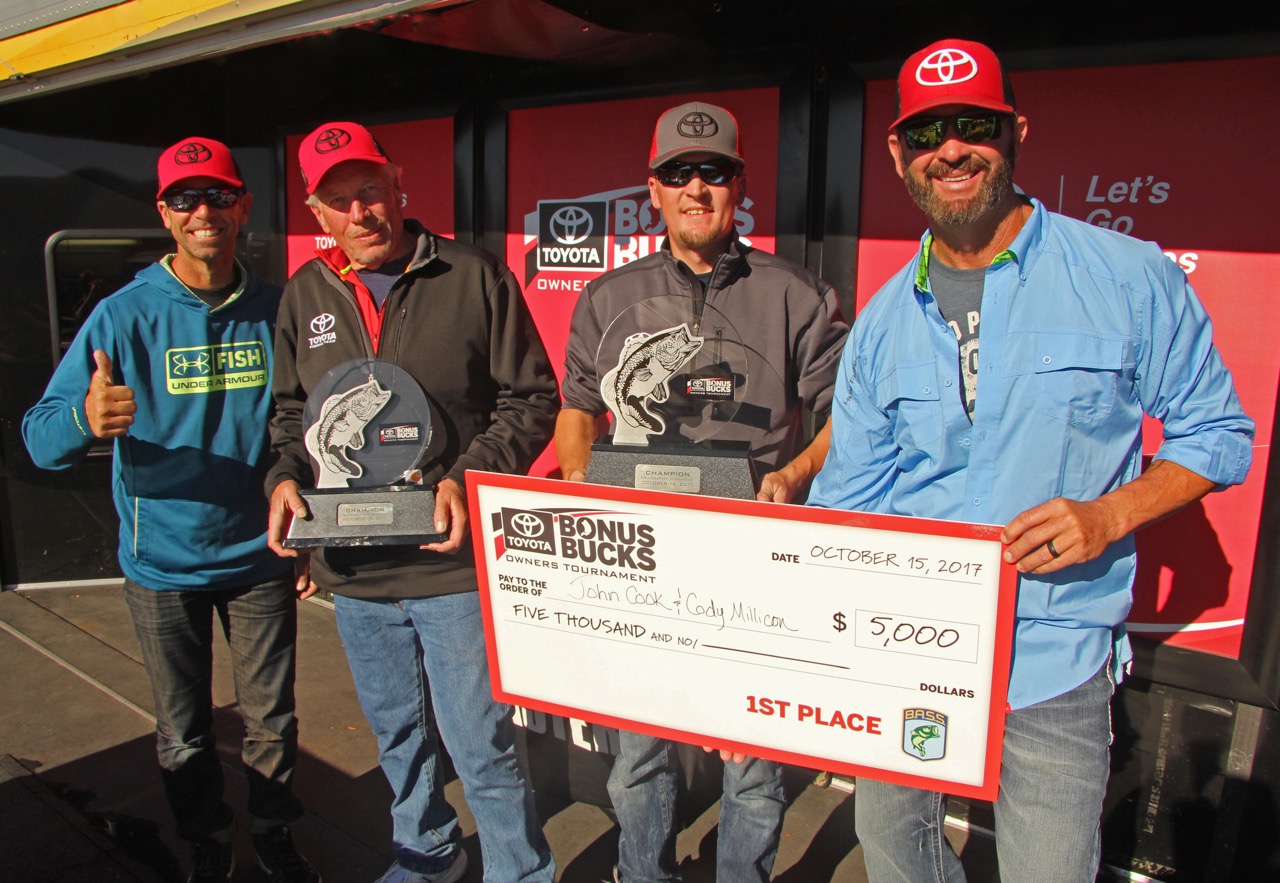 Millican and Cook also took Swindle’s advice on maintaining a positive mental attitude en route to victory, as they overcame the adversity of thinking their boat might be sinking when big waves crashed over the stern.

“We were tied up to a tree making repeated casts with a ¾ ounce football jig to a brushpile along side a dock, and before too long strong winds started filling the boat with water,” says Millican, who calls Table Rock his home lake.

“We maintained our composure and pulled into a boat dock to escape the wind, let our bilge pump get rid of all the water, and went back to fishing,” he added.

While their winning weight of just 11 pounds 6 ounces was the lowest in the six-year history of the fellowship-rich event, it was good enough for a lifetime memory.

“This is a top-notch event, no entry fee, great food, lots of free stuff – we were here last year – and now we’ll fish this event forever,” says Millican.

Millican’s partner John Cook has deep loyalty to Toyota. He pulled the winning boat with a 4Runner, but has a Tacoma at home with 302,000 miles on it. “I call that old Tacoma “Otis’s truck” – because I have a dog named Otis that loves to ride in it.”

Millican and Cook weren’t the only team to enjoy the event’s prize-filled payout. The top 30 teams received a paycheck, three teams that finished outside the top 31 were randomly chosen for a $500 cash prize, and the 31st place team got the LEER Truck Caps “Lucky Dog” $750 cash prize.

Plus, the 15th place team won a $1,000 Bass Pro Shops Gift Certificate, and the 4 pound 3 ounce largemouth caught by the team of Ronnie Dobbs and Troy Eakins was good enough for $1,000 worth of free merchandise from Carhartt.

Certainly, nobody went home empty handed. Participants who traveled from states across America were treated to free meals, a generous amount of free gear, and tremendous fellowship before the first cast was ever made.

You don’t have to win a tournament to win the “Bonus Bucks” – you just have to be a registered participant in any of the dozens of tournaments sanctioned by Bonus Bucks, and be the highest-placing participant. To learn more and get signed-up, please visit http://www.toyotatrucksbonusbucks.com/ or phone (918) 742-6424, and ask for Jessica or Kendell and they can also help you get signed-up.