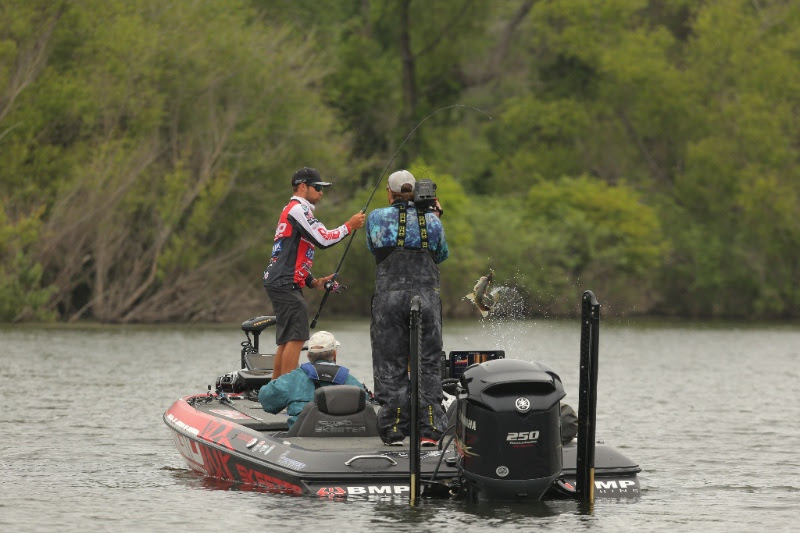 BIRMINGHAM, Ala. — The inaugural Toyota Bassmaster Texas Fest benefiting the Texas Parks and Wildlife Department was held in May on one of the best-known and most popular tournament fisheries in the United States: Sam Rayburn Reservoir near Lufkin, Texas.

The 2018 edition of the $1 million Elite Series event will take place May 17-20 on a lake that B.A.S.S. has never visited before — Lake Travis near Jonestown, Texas — Bruce Akin, B.A.S.S. CEO, announced today.

“In its 50-year history, B.A.S.S. has held events on Sam Rayburn 31 times, but we’ve never had a professional-level bass tournament on Lake Travis,” Akin said. “It’s doubtful that many of our Elite Series anglers have ever fished the lake, and that’s bound to make for an exciting competition for the anglers and their fans.”

A picturesque, clear, highland reservoir on the Colorado River, Travis is popular among recreational boaters and watersport enthusiasts in the Austin area, and it also possesses a burgeoning bass fishery that anglers across the country are beginning to discover, according to Dave Terre, Texas’ chief of Inland Fisheries Management and Research.

“Lake Travis caught a bunch of new water in 2015 that inundated thousands of acres of brush habitat, resulting in a significant expansion of its bass population,” Terre explained. “TPWD responded by stocking over 750,000 Florida bass to enhance fishing quality. Lake Travis has since become a top destination for Texas bass anglers. We are excited to showcase this lake to a nationwide audience.”

“With 110 of the best bass anglers on the planet converging on Lake Travis, the millions of fishing fans who watch our live coverage of the event or read about it later will appreciate why this lake is considered the ‘crown jewel’ of the Colorado,” Akin added.

The event, which is covered in real time on Bassmaster LIVE programming on Bassmaster.com and WatchESPN and in a special episode of The Bassmasters television program to be aired later on ESPN2 and ESPN3, also will focus the national spotlight on the catch-weigh-release tournament format pioneered by the Texas Parks and Wildlife Department (TPWD) in the Toyota Texas Bass Classic.

Each Elite angler will be accompanied by a “judge” who will verify that the angler’s bass are weighed on a set of extremely accurate handheld scales. Weights of the five heaviest bass each day will go into each angler’s creel, and the heaviest four-day catch earns the $100,000 first-place award as well as a guaranteed invitation to the 2019 GEICO Bassmaster Classic presented by DICK’S Sporting Goods.

Anglers also will be able to bring in their heaviest bass of the day, if it’s longer than a predetermined minimum, to show off to the weigh-in crowd. Fish weighed in at Jones Brothers Park in Jonestown, Texas, will be returned to the lake and released alive. The heaviest bass of the tournament is worth a new Toyota Tundra pick-up with an estimated value of $50,000. The lake record is a 14.2-pound largemouth caught in 1993, but Travis is known more for its quantity of good-size bass than for producing giants like that one.

“We’re excited to continue to showcase Texas’ Parks and Wildlife through one of the largest competitive fishing events in the country,” said Brent Hillyer, vice president marketing for Gulf States Toyota. “The Texas-built* Tundra’s power and capabilities for the outdoors makes it the ideal truck to be awarded to the winner of the heaviest catch in the Toyota Bassmaster Texas Fest.”

Terre pointed out that more than $2.75 million has been generated for fisheries projects through Texas Fest and its predecessor, Toyota Texas Bass Classic, since 2007. Proceeds benefit the Texas Parks and Wildlife Department’s youth fishing and urban outreach programs, including the Neighborhood Fishin’ Program, which brings fishing to families at 18 community park lakes in 11 urban areas, and the Texas Division of the Wildlife Forever State-Fish Art Contest, which seeks to interest youth in grades K-12 in fishing.

Texas Fest has already become known as a must-attend event for fishing families. On Friday and Saturday at the Jones Brothers Park expo site, a “Get Hooked on Fishing” interactive children’s program will be open from 10 a.m. to 2 p.m., offering casting lessons, a fishing pond and chances to mingle with their fishing heroes. Fan Appreciation Day is Saturday, May 19, and will feature Bassmaster University fishing seminars taught by Elite Series anglers, as well as the Texas Parks and Wildlife Outdoor Adventures displays and activities.

“The City of Jonestown welcomes the Bassmaster Elite Series Tournament to Jones Brothers Park on the scenic North Shore of Lake Travis. We look forward to showcasing our spacious park with three boat ramps that is a popular site for anglers year-round,” said Ron Wilde, City Administrator. Wilde noted that the 32-acre park was built in 1985, has 2,100 feet of shoreline and connects to other city parks by a scenic walking trail.

Another highlight of the Lake Travis event will be the Bassmaster High School All-American Fishing Team tournament, which pairs the 12 top high school anglers in the country with Elite anglers for a one-day fun-fishing competition on a nearby lake.

Idaho angler Brandon Palaniuk won the 2017 Toyota Bassmaster Texas Fest on Sam Rayburn. It provided a springboard for a dream season that culminated in his winning the Toyota Bassmaster Angler of the Year title.

(*Assembled in Texas with U.S. and globally sourced parts.)