The nation’s top bass anglers will compete for $1 million in payouts and berths in the 2019 Bassmaster Classic presented by DICK’S Sporting Goods during the 2018 Toyota Bassmaster Angler of the Year Championship, Sept. 20-23, on Lake Chatuge, Georgia. Bassmaster Elite Series pro Justin Lucas is currently leading the race with 716 points. 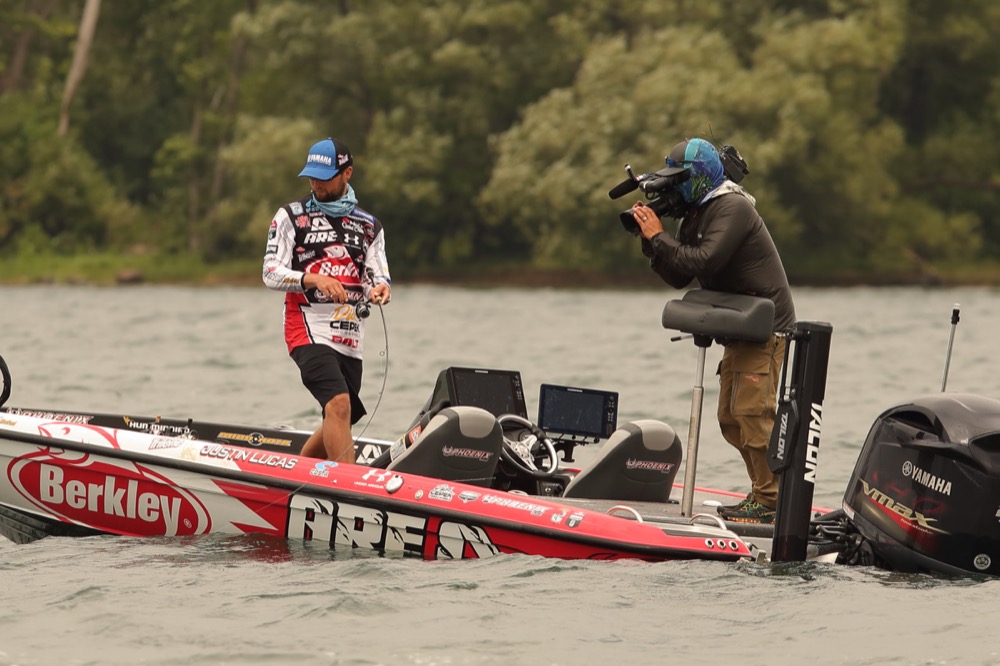 HIAWASSEE, Ga. — Josh Bertrand and Justin Lucas are the best of friends.

Normally, during the days leading up to a Bassmaster Elite Series event, they would share quite a bit of information about how they were catching their fish.

But for a number of reasons, this next tournament will be different.

For one thing, it’s the Toyota Bassmaster Angler of the Year Championship — and Lucas and Bertrand currently occupy the top two spots in the standings for the $100,000 first-place prize with only nine points separating them.

For another, the tournament venue — Georgia’s Lake Chatuge — covers 7,000 surface acres and isn’t really conducive to the same info sharing as massive past venues like Lake Oahe or the St. Lawrence River.

The tournament, which features a total purse of more than $1 million, is scheduled for Sept. 20-23, with daily takeoffs at 7:10 a.m. ET from Georgia Mountain Fairgrounds and weigh-ins back at the Fairgrounds each day at 3:45 p.m.

While Lucas and Bertrand certainly haven’t stopped communicating, their subject matter has changed a bit as of lately.

“I’ve talked to Justin every day this week and just about every day last week,” said Bertrand, whose wife, Chantel, is expecting the couple’s second child Sept. 28. “We’ve been friends for a long time, so that’s obviously not going to change.

“But when we’re practicing for a tournament, we generally share a lot of information. We may not be able to this time around since it’s a unique situation.”

When it comes to sharing information, professional anglers don’t often share exact baits or locations. But they do frequently give generalized tips like “They’re biting on long, sloping points where the water drops off sharply from 10 to 25 feet.”

Even that, Bertrand said, may be tough for this event.

“When you talk about a lake this small, if you’re looking for a certain type of spot or structure, there may only be two or three of those type spots on the whole lake,” said Bertrand, who scored his first career Elite Series victory at the St. Lawrence River in August. “It changes things a lot.”

Lucas, who finished second to Bertrand by less than a pound at the St. Lawrence River — and was visibly happy for his friend — agreed.

“The lake is so small that we’ll probably see each other every day, two or three times,” Lucas said. “During practice for a normal tournament, if we saw each other at all, it would usually just be a drive-by.

“We don’t want to be on top of one another’s fish — and obviously, we both want to win.”

Like the rest of the 50-angler field for the AOY Championship, Bertrand and Lucas have limited knowledge of Chatuge. BA.S.S. has never held a major event on the lake, and Bertrand will be seeing it for the first time when he arrives for the official practice days Monday, Tuesday and Wednesday.

Lucas has fished the lake before — but only briefly and with no idea he’d ever be back there for a tournament.

“I actually fished there last summer on a family vacation, and it’s a great lake,” he said. “I was really kind of hoping to keep that lake quiet, but there won’t be any secrets now.

“You put 50 pros on it for three practice days and four competition days, and they’re going to figure out everything.”

Bertrand has been researching the lake online, and he said it bares similarities to other lakes he’s fished in terms of depth and the types of forage it has for bass. But he also said there’s no way to know how several X factors will come into play.

With Hurricane Florence approaching the East Coast, the extended weather forecast is calling for at least a 50 percent chance of rain for the entire practice period. That could cause the fishing conditions to change dramatically in a matter of hours on a small fishery.

Also, Bertrand said it’s hard to know how the bass in a smaller lake will react to the constant pressure of a three-day practice period followed by a four-day event.

“I know a one-day event on a lake that size can make the fishing tougher,” Bertrand said. “So it’s impossible to know how a four-day event will affect it.”

“If the fish are relating to bait, they’ll be roaming around a lot and might not get pressured as much,” he said. “That’s what you’d usually expect for this time of year, but we won’t know until we get there.”

In addition to the cash payout, the top finishers in AOY standings will qualify for the 2019 Bassmaster Classic presented by DICK’S Sporting Goods. That tournament, scheduled for March 15-17 on the Tennessee River in Knoxville, Tenn., will give one angler the chance to raise the most iconic trophy in bass fishing.