Thrift Leads on Day One of REDCREST 2021 on Lake Eufaula

EUFAULA, Ala. (Feb. 22, 2021) – A field of the top 40 pros from the Major League Fishing Bass Pro Tour converged on Lake Eufaula in Eufaula, Alabama, this morning for the start of REDCREST 2021, the Bass Pro Tour championship. The five-day competition, which awards a top cash prize of $300,000 to the winner, is being live-streamed online and filmed for television broadcast on CBS, the Discovery Channel and the Outdoor Channel. 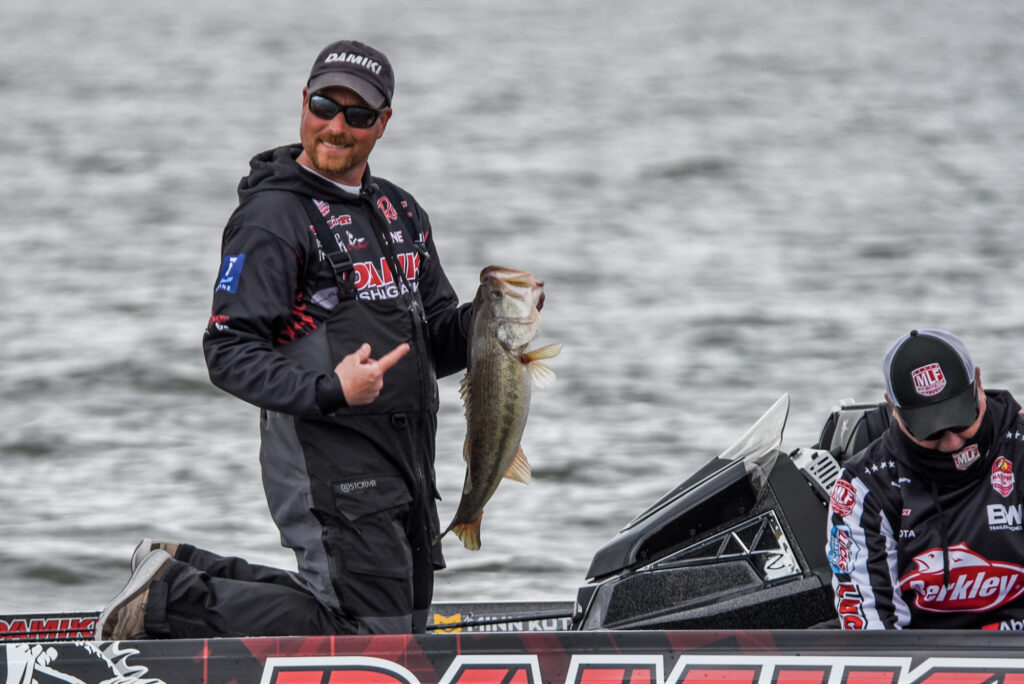 Pro Bryan Thrift of Shelby, North Carolina, weighed in 13 bass totaling 45 pounds even, to take the early lead after Day One of the Qualifying Round. Thrift holds a 13-pound, 14-ounce, lead over Ott DeFoe of Blaine, Tennessee, who caught nine bass weighing 31-2, good for second place.

“Today went about as good as I could have imagined,” said Thrift in the post-game General Tire Take Out show. “It started out kind of slow – it took me an hour, an hour and a half to kind of figure out where the fish were setting. Once I found them, I ended up catching five or six on a jerkbait and a Damiki swimbait. When they quit, I went running around and caught a couple on a shaky-head and hit another spot and ended up catching a 7 (pounder) and a 5 (pounder). I couldn’t have asked for a better day.

“I’ve got about 50 rods on my deck, and I think I caught a bass on most of them today,” Thrift joked. “I caught fish on a lot of different baits. My big one came on a 4-inch swimbait with light line – when I first hooked it and was fighting it on the light line I felt like it was way too big to be a bass. I caught it with a 7-foot medium-heavy Fitzgerald Stunner rod paired with a (Abu Garcia) Revo MGX reel and P-Line Tactical 10-pound-test fluorocarbon line.”

“I’m going to use tomorrow as a practice day,” Thrift went on to say. “I don’t think I have enough right now to win the event, so I’ve got to try to find more. There are going to be a lot of fish in new water in the next few days – we’re looking at three days of sunshine and 70-degree weather. The water is going to warm a lot, and these fish could change up really quickly. It’s almost March in Southern Alabama, so these fish are ready to spawn. Two or three of these hot sunny days, they can push up shallow. The first person to find that can definitely win this event, so I’m going to spend a lot of time looking for that tomorrow.”

Like Thrift, DeFoe credited a jerkbait as a big part of his success today as well.

“I switched up to the jerkbait this morning and that was the big player for me today,” DeFoe said. “The 13 Fishing Loco Special was the deal. Those fish wanted something a little slower, something you could pause and let hang right in front of their faces. I did catch a really nice one late in the day on a Terminator Pro Series spinnerbait, but the jerkbait was key. I feel like I’m in pretty good shape and all in all, today was a great start. I’ve got a little bit of a cushion, so tomorrow I’m going to try to find something else for later this week to go with what I’ve got.”

The post Thrift Leads on Day One of REDCREST 2021 on Lake Eufaula appeared first on Bass365.com.