HOT SPRINGS, Ark. (Aug. 9, 2019) – Fifty-two of the best bass anglers in the world began their three-day competition for a top cash award of $300,000 at the 24th annual FLW Cup, the world championship of professional bass fishing, on Lake Hamilton in Hot Springs, Arkansas, Friday. 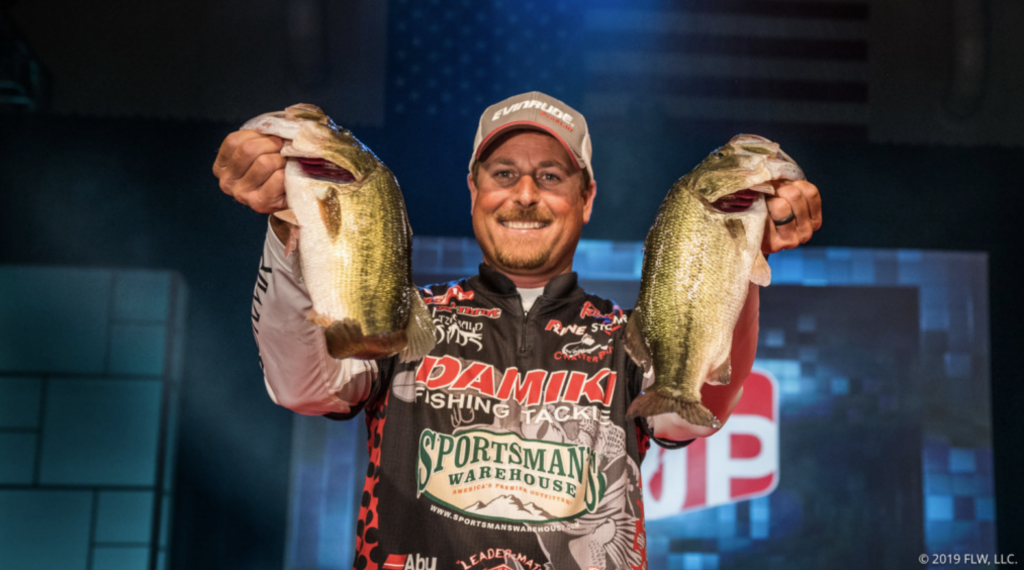 “One of the cool things about having the Cup in August every year is that you never know what’s going to happen, and you can usually throw practice out the window. That’s what I did today and I caught fish off of stuff that I had never even fished in practice,” said Thrift, who has never won an FLW Cup but has 9 top-10 finishes in FLW Cup competition – most in Tour history. “I think I ended up catching 20 to 25 fish, steady all day – one bite here, one bite there – on around 10 different baits.”

Thrift declined to mention any bait specifics at this point of the event, but did mention throwing a buzzbait – as did the majority of competitors. Of the five bass that Thrift brought to the stage, he said that three came shallow and two came from brush piles offshore.

“I’m flying by the seat of my pants, doing a little of everything,” Thrift said. “I’ve got 20 different Fitzgerald rods rigged up on my deck and I’m throwing at everything that I see.”

Although an early lead is certainly favorable, Thrift acknowledged the fact that he still has work left to do in order to make the final-day top-10 cut.

“I’m not going to count my chickens before they’re hatched, and I expect the fishing to get tougher tomorrow,” Thrift went on to say. “I’m hoping to go out tomorrow and catch 10 pounds. That was my goal for today – a 10-pound bag – and I’d be happy with that tomorrow.”

The top 20 pros after Day One on Lake Hamilton are:

Fans will be treated to the FLW Expo at the Hot Springs Convention Center located at 134 Convention Blvd., in Hot Springs, each day from 10 a.m. to 4:30 p.m. prior to the weigh-ins. The Expo includes activities, giveaways and games provided by more than 40 FLW sponsors, as well as the opportunity to shop the latest and greatest tackle and outdoor gear from more than 100 exhibitors – including multiple kayak-fishing companies in the Expo’s new Kayak Village. The opportunity to meet and interact with top professional anglers, including Hank Parker, Jimmy Houston, and many more also awaits fishing fans.

On Saturday and Sunday the first 250 children each day 14 and under who are accompanied by an adult will receive a voucher to redeem for a free rod-and-reel combo after the evening’s weigh-in from Shakespeare rods. On Saturday, one lucky fishing fan will win a brand new Jackson Kayak Coosa FD following the weigh-in, and on Sunday a new Ranger Z521L bass boat with a 250-horsepower Evinrude or Mercury outboard motor bill be awarded. The Kayak and Ranger Boat giveaways are free to enter but the winner must be present at the conclusion of each day’s final weigh-in to win.

FLW fans will also enjoy the Bass & BBQ Festival in conjunction with the FLW Expo. FLW has partnered with the Arkansas Democrat Gazette to feature award-winning BBQ teams offering delicious fare to visitors and raising money for local charities. Come enjoy all of the fishing action and barbeque from top barbeque teams on Friday, Saturday and Sunday 10 a.m. to 4:30 p.m. and help raise money for some worthy causes.

Country music superstar Trace Adkins will perform a free concert on the weigh-in stage at the Bank OZK Arena on Sunday, Aug. 11, starting at 4 p.m., prior to the final weigh-in. The concert is presented by Realtree and KSSN 96. Adkins will be showcasing his fiery and memorable live performance to fishing fans in Arkansas as well as live-streamed to fans around the globe at FLWFishing.com.

The Morning Takeoff, FLW Expo, Bass & BBQ event, live concert and weigh-ins are all free and open to the public.

Television coverage of the 2019 FLW Cup at Lake Hamilton will premiere in the fall of 2019. The Emmy-nominated “FLW” television show airs each Saturday night at 7 p.m. EST and is broadcast to more than 63 million cable, satellite and telecommunications households in the U.S., Canada and the Caribbean on the World Fishing Network (WFN), the leading entertainment destination and digital resource for anglers throughout North America. FLW television is also distributed internationally to FLW partner countries, including Canada, China, Italy, Korea, Mexico, Portugal, Spain and South Africa.

FLW is the world’s largest tournament-fishing organization, providing anglers of all skill levels the opportunity to compete for millions in prize money in 2019 across five tournament circuits. Headquartered in Benton, Kentucky, with offices in Minneapolis, FLW and their partners conduct more than 290 bass-fishing tournaments annually around the world, including the United States, Canada, China, Italy, South Korea, Mexico, Namibia, Portugal, South Africa, Spain, and Zimbabwe. FLW tournament fishing can be seen on the Emmy-nominated “FLW” television show while FLW Bass Fishing magazine delivers cutting-edge tips from top pros. For more information visit FLWFishing.com and follow FLW at Facebook, Twitter, Instagram, and YouTube.