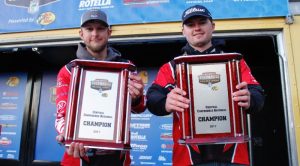 The Red Raider teammates tallied a three-day Carhartt College Series record of 69 pounds, 8 ounces to win by a whopping margin of 12-1 over the University of Louisiana at Monroe.

Persistence paid off for the Texas anglers as they toughed it out on one primary offshore spot, waiting for waves of big bass to funnel into the area for the duration of the tournament. McGuire and Bynum didn’t give up or hang their heads after a humbling 12-14 on Thursday’s competition day had them mired in 48th place.

“We were catching them when they were moving up to feed before they head to spawn,” McGuire said. “Those big fish always go deeper for the winter so we wanted to position ourselves where they were headed.”

The victors fished what they called a “highway,” which is what anglers refer to when an area has attributes that fish desire for prespawn and postspawn conditions. There is always a wave of fish moving deeper to the area or pulling up shallower during that transition. They picked apart that highway with four baits throughout the three-day event.

A big contributor was a Strike King 6XD deep-diving crankbait. They also used a football head jig, a swimbait and a Carolina rig.

After struggling Thursday, they stayed with their gameplan because they knew the quality was there and they could see them on their electronics. It paid off bigtime as they caught the Bass Pro Shops Nitro Big Bag, which weighed 28-10 Friday and was worth a $250 gift card to Bass Pro Shops. The catch was anchored by the 10-2 Carhartt Big Bass, which also garnered the team a $500 Carhartt gift card.

They utilized the second biggest bag of the event to pull away and take the victory over the first-day leaders Tyler Craig and Spencer Lambert of Louisiana-Monroe.

They took a different approach to their second-place finish, as they focused on a ditch that was filled with hydrilla and plenty of bass. Every morning Craig and Lambert would load the boat with eight to 10 bass on a red lipless crankbait.

“I think those fish were pulling up at night and feeding in that ditch,” Craig said. “I found that spot two weeks ago and caught 12 or 13 fish and decided to leave it alone because it would probably be good this week.”

Thursday was the first day of the cold front and it paid big dividends for the duo, as they landed an 8-pounder and a 6-pounder to anchor their 24-8 limit.

“I don’t know what would’ve happened if it stayed warm during the tournament,” Lambert said. “But I think the really cold evenings stopped the bigger females from pulling up from deeper water into the area.”

The giant size may not have cooperated for them Friday and Saturday, but there were plenty of solid bass to sift through as they built a consistent mid- to upper teens weight.

The Top 18 teams, excluding Murray State’s Hunter Mills and Jordan Hartman, will advance to the Carhartt Bassmaster College Series National Championship presented by Bass Pro Shops later this summer. Murray State isn’t in the Central Regional, but decided to fish Sam Rayburn for School of the Year points. Their regional is in May on Tennessee’s Cherokee Lake.

For their Day 2 lead, Texas Tech was also awarded the Livingston Lures Leader Award of $500 in merchandise.