Matthew Robertson wins the 2018 Bassmaster Team Championship Classic Fish-Off on Harris Chain of Lakes, out of Leesburg, Fla., with a two-day total of 57 pounds, 9 ounces. 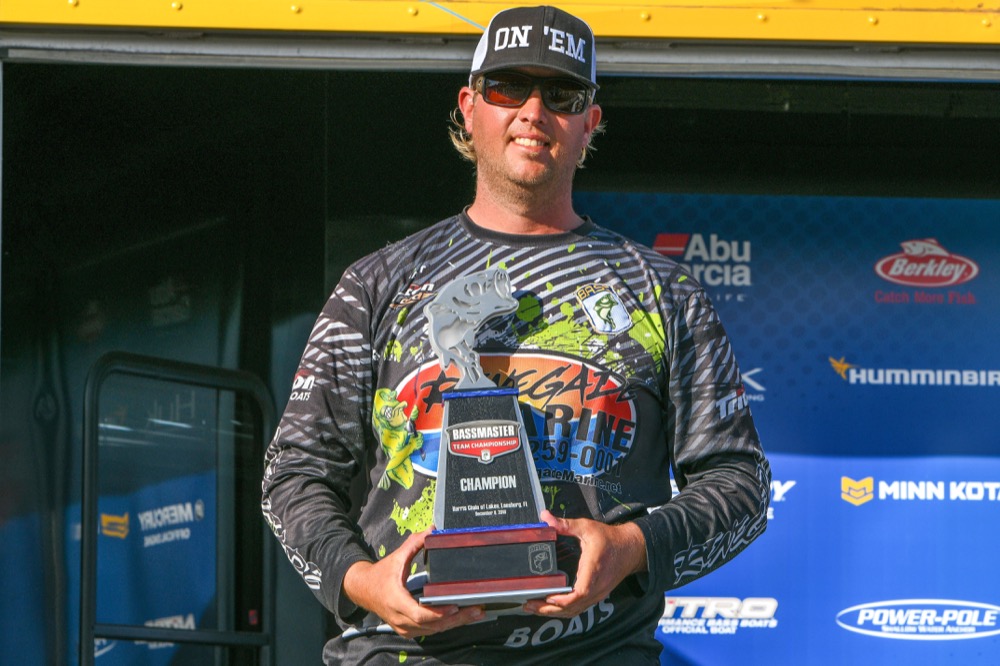 LEESBURG, Fla. — Matthew Robertson said he’s spent the past 20 years working toward a chance to compete in the Bassmaster Classic.

Following a commanding performance at the Bassmaster Team Championship and the ensuing Classic Fish-Off, Robertson’s time has arrived.

Robertson, a 32-year-old resident of Kuttawa, Ky., was dominant both Friday and today on the Harris Chain of Lakes here in central Florida. His two-day total weighed a whopping 57 pounds, 9 ounces, which gave him almost a 24-pound cushion over the nearest competitor in the field of six anglers.

Robertson caught a five-bass limit on Friday that weighed 25-10, but he saved his best for last — a 31-15 sack that was the heaviest bag weighed in either the Team Championship or the Fish-Off.

Robertson teamed with Kentucky B.A.S.S. Nation Team Trail partner Wendell Anderson on Thursday to catch a 29-1 limit; the second-heaviest of the week. Robertson’s 25-10 limit on Friday was the third heaviest.

The victory earned Robertson the 52nd and final berth in the 2019 Bassmaster Classic presented by DICK’S Sporting Goods. The Classic, the most prestigious bass fishing championship in the world, will be held March 15-17 in Knoxville, Tenn.

“Those guys (already in the Classic) don’t know who I am right now,” Robertson said. “But come March, I want them to show them what I can do.”

The Top 3 finishers among 197 teams entered in the national team championship qualified for the Fish-Off, which began Friday as the anglers competed individually for a spot in the Bassmaster Classic. Robertson and Anderson finished second in the team event, largely because of that 29-1 limit on Day 2, which vaulted them from a tie for 59th place after Day 1 straight into the Fish-Off.

But Robertson took things to a whole new level in the individual competition.

Many of the nearly 400 anglers competing this week fished grassbeds and shorelines throughout the Harris Chain — normal strategy for this fishery. Robertson, however, opted to fish 150 yards offshore in about 9 to 10 feet of water. He said there was no visible structure there; just a hard spot on the lake’s bottom. Robertson said the area measured 40 by 50 yards, and when he idled over it in practice, he saw big bass on his electronics.

“When Wendell and I got down here, we decided we were gonna’ fish exclusively offshore,” Robertson said. “We idled every inch of (Lake) Eustis and Harris and Little Harris in practice and we found the spot. We actually couldn’t get them to bite at practice, so that’s why we want back over to Eustis on Day 1 (of the Team Championship.)

“When we only caught 11 pounds in Eustis, we knew we had to make a change. If we were going to die, we were going to die doing what we do well, and that’s fishing offshore. So, we went back to that hard spot and pulled out some big swimbaits, a big spinnerbait and a big crankbait. We went to work on them.”

Anderson graciously relinquished the spot to his partner in the Fish-Off, and it replenished itself both days. Each of the bass Robertson caught Friday weighed between 4 1/2 and 5 1/2 pounds, but he caught a 7-4 Saturday to anchor the 31-15 bag.

Robertson’s key lures included a SPRO Big John (citrus) crankbait and a 7-inch swimbait with a 1-ounce jighead. The combination worked as he caught a limit within 75 minutes of takeoff both days of the Fish-Off.

He upgraded his catch several times on both days, and put back more pounds of bass than several of competitors weighed in the Fish-Off.

Robertson said he’s extremely confident in his abilities, but humbled by his chance to represent everyday anglers in the Classic.

“This is very special,” he said. “I’m just your ordinary working man. I represent every common man and that’s who I’m going to be fishing for in the Classic.”

Jayme Copenhaver III of the Chattanooga (Tenn.) Bass Association finished second in the Fish-Off with a two-day total of 33-12. Copenhaver caught a 21-6 limit Friday and trailed Robertson by 4 1/4 pounds heading into the final day of competition. He couldn’t get enough big bites today, however, to pressure Robertson.

The Greater Orlando Sports Commission hosted the tournament with the assistance of Florida’s Lake County.

In all, 197 tandems (394 anglers) from 35 states and three foreign countries competed in the Bassmaster Team Championship. A total of $120,000 in cash and prizes were distributed to the top 39 teams.