ALEXANDER CITY, Ala. — Before this week, it had been more than 15 years since Takahiro Omori fished a major professional bass tournament on Lake Martin.

But history — both recent and distant — says he should find ways to come back as often as he can. 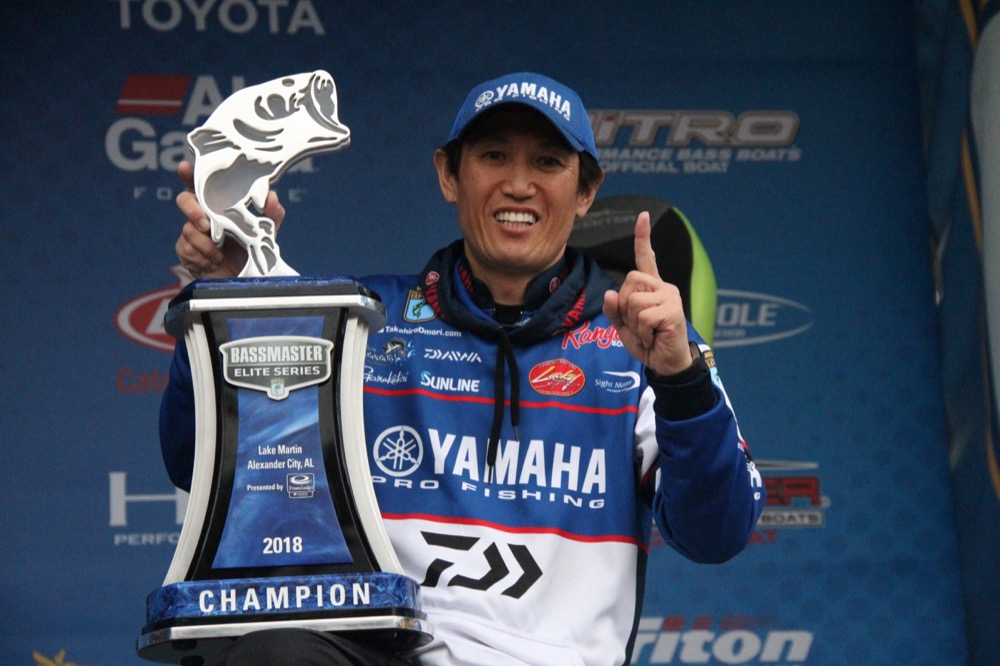 Omori went into Sunday’s final round of the Bassmaster Elite at Lake Martin presented by Econo Lodge with a 4-pound, 2-ounce lead. He managed a final-day catch of 14 pounds to claim the victory with a four-day total of 59-8.

It was Omori’s seventh career victory with B.A.S.S. and his second B.A.S.S. win in three years in the state of Alabama after a triumph on Wheeler Lake in 2016. He also won a FLW Tour event on Lake Martin in 2001.

“This time of year, I like to fish shallow — especially during the prespawn,” said Omori, who surpassed $2 million in B.A.S.S. career earnings with the $100,000 win. “Usually when we schedule a tournament for early February, it’s in Florida and the fish have already spawned. But schedule-wise, coming to this lake this time of year is very good for me.”

Omori didn’t exactly have a wealth of options for putting together good limits during the four-day event. During a mostly subpar practice, he identified one small area up the lake on Tuesday where current was flowing behind a small island.

“I caught two keepers and maybe one nonkeeper in back-to-back casts there in practice,” Omori said. “I never had anything big, so I didn’t really know what I had there.

“I was taking a chance because if I had gone up that far and then not caught anything, I would have been in trouble.”

The water on the outside of the island was so shallow that Omori had to trim up his outboard and churn mud off the bottom just to reach the right spot. Once he was in place, he dropped his Power-Pole shallow-water anchors and made repeated casts into the current with a 1.5 TO Craw Lucky Craft squarebill crankbait.

“I think not many people go up that far,” he said. “So, the fish are less pressured. There was also some current coming through there, which really helped.”

There were times the first three days when he seemed to be catching fish literally every other cast. But things got a little slower on the final day.

“The more current there was, the more the fish were ganged up,” he said. “Every day, there was less and less current. That made it tougher and tougher because the fish were more scattered out.

“Today, there was less current than any of the four days.”

Omori estimates he caught 50 keepers off the spot during the course of the tournament. But on Sunday, he only managed four and was forced to go looking elsewhere to fill out his limit.

Fortunately, one of his four fish from the area Sunday weighed over 4 pounds — his second biggest bass of the week — and his cushion over the rest of the field was enough to lift him to victory, even without a stellar final day.

Rookie angler Roy Hawk from Arizona caught 11-2 Sunday, his smallest limit of the week and finished with 52-8 — a full 7 pounds behind Omori. New Jersey angler Adrian Avena placed third with 50-13, California veteran Jared Lintner was fourth with 50-10 and Washington pro Luke Clausen was fifth with 50-7.

When asked if he’d like to come back to Lake Martin more often, Omori was coy.

“Every time is different,” he said. “So, you never know.”

Omori was awarded $1,000 for the leading the Toyota Bassmaster Angler of the Year points race at the end of the event.

Hawk earned the Power-Pole Captain’s Cash Award of $1,000 for being the highest-placing angler who is registered and eligible and uses a client-approved product on his boat.

Cliff Prince was awarded $1,500 dollars as the winner of the Phoenix Boats Big Bass award. He had the largest bass of the tournament with a 6-11 on Day 1.

The Alexander City Chamber of Commerce is hosting the event.