Tackle and Rigging Tips for the Boom Boom Swimbait

Fred Roumbanis is usually targeting the biggest bass in the lake when he’s chunking and winding his signature Optimum Boom Boom Swimbaits and he knows that trophy fish don’t get big by being stupid or careless. Even when hooked, they’ll use every trick available to them in order to get back to their comfort zone in safety. One miscue or one weakness in your tackle and it’s game over.

That’s why he relies on the 7’11” iRod Fred’s Crank Launcher to get the job done with both the weedless and treble hook versions. “It’s soft enough that it allows them to inhale it, but it also has plenty of backbone to set the hook and land them,” he said. In open water he’ll typically pair the lures with 15 or 20 pound fluorocarbon, which sinks, has little stretch and minimal visibility. In heavy grass, though, on lakes like Okeechobee, he prefers 65 pound braid for its strength and castability under all conditions.

With the treble hooked Boom Boom, Roumbanis relies on a size 1 round bend Gamakatsu treble under most circumstances, but will upgrade to a 1/0 in really open water. 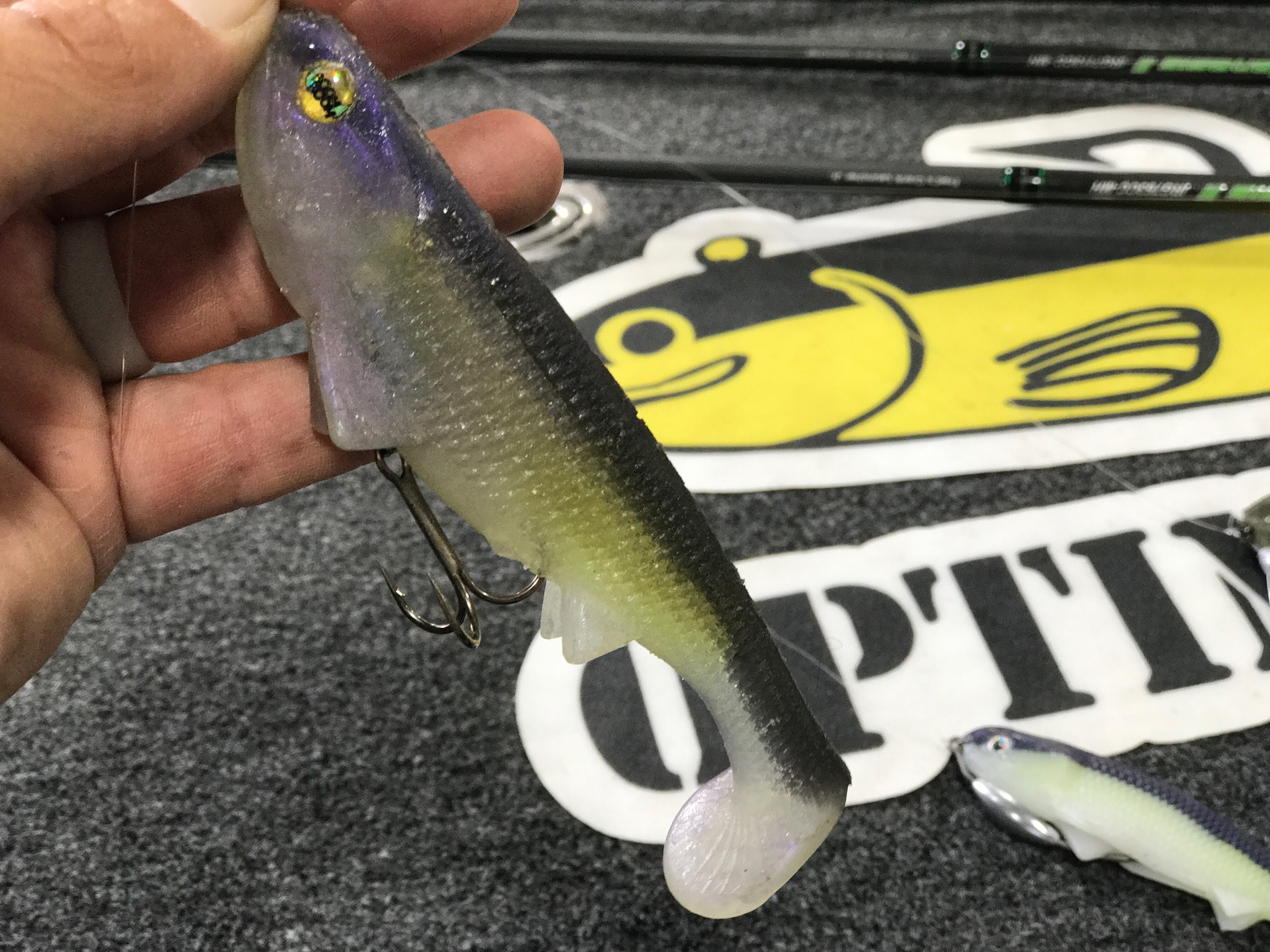 “Be sure to put one point of the treble back into the body,” he advised. “And keep the split ring tight.”

His preferred hook for the 6” weedless model is the 8/0 Owner Beast, which comes in a weighted (3/8 ounce) versions, as well as a “Flashy Swimmer” with a small willowleaf blade dangling from beneath the hook. All of them use a large Centering Pin Spring (CPS). For the 4.5” Weedless Boom Boom he likes the 7/0 (1/4oz) Wide Gap Screwlock from Hayabusa (Model 958). 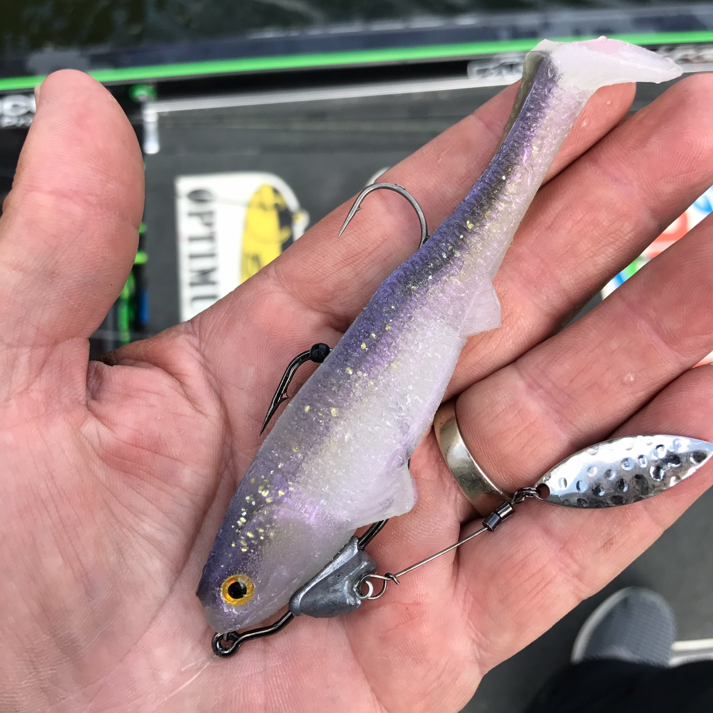 “It’s the most simple bait to rig up,” he said. “The most important thing is that everything be straight. It’ll have a lot more action than if it’s kinked up.” He cautioned that it’s critical to put the CPS through the bottom color of the bait, not where the colors meet, which will put it in perfect position for a rock solid hook set. He also adds a bit of scent around the bend of the hook so that “it slips through easier.” 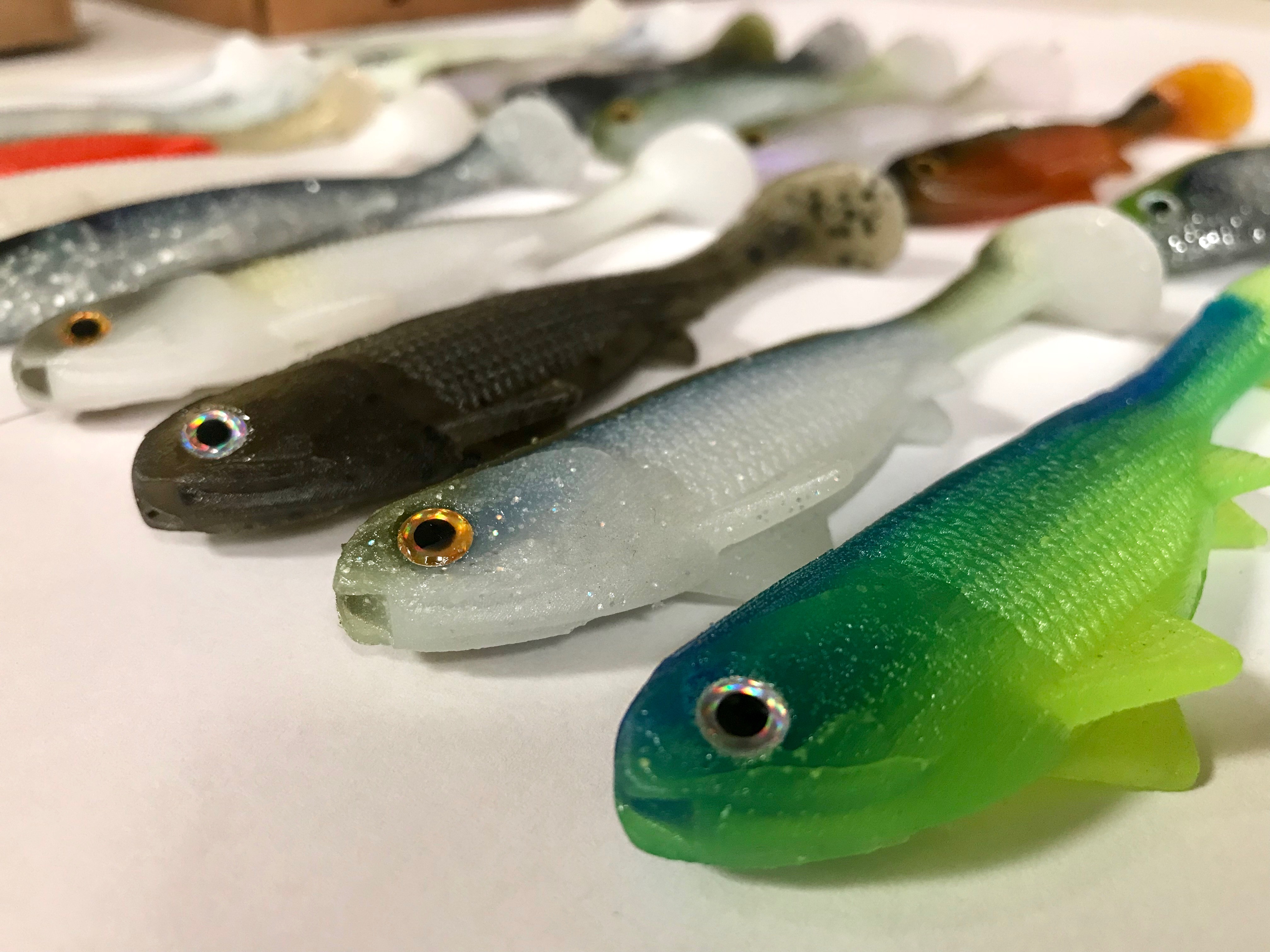 The Boom Boom swimbaits come in a variety of colors to match different situations.

While there are over a dozen colors of these baits available, one for every water clarity and local forage, Roumbanis keeps his choices relatively simple. “On dirtier lakes, like here on Dardanelle, I like whiter colors like Sexy Shad and Ayu. I think that white bellies equal greater visibility. We’ve also started pouring them up in Junebug and Black Blue flake which should be on the market real soon. On clearer lakes like Beaver, Shasta, Oroville or Smith Mountain, I like more natural colors like Ghost Minnow, PB Shad and Ghost Rider. And on cloudy days, Jackson Trout is a killer.”