A plastic worm goes with summer bass fishing like fireworks and the 4th of July. And as a kid, the plastic worm was the first artificial lure top pro Gerald Swindle remembers learning to use on trips with his dad, Tommy – one heck of an angler in his own right. 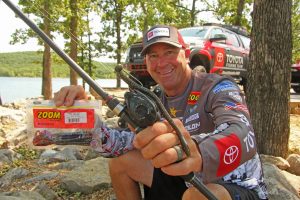 These days the Team Toyota pro utilizes long soft plastic worms to cash tournament paychecks when water temps heat up, but the 30 years of wisdom he shares about using them might surprise you, and help you catch more fat summer largemouth too.

Swindle uses two types of big worms in the heat of summer – ribbon tails and straight tails, and his choice of which is largely determined by similar looking jawless fish known as lamprey.

“Look, I don’t claim to know much about the life history of fresh water lampreys, but I can tell you based on three decades of bass fishing, they love to live around underwater shell beds on all the Tennessee River reservoirs. And lampreys seem most prominent earlier in the summer, so that’s when I use a ribbon tail worm that resembles them,” reasons Swindle.

Swindle’s correct. At least a half-dozen species of lamprey inhabit his home state’s waters, and most spawn and hatch larvae from late spring into early summer. But as summer enters its final stretch, and the bass have seen a ton of the popular ribbon tail worms, he’ll typically use a straight tail worm to give them a look they haven’t seen much.

Standup Head instead of Texas Rig

Whether he’s fishing a Zoom Ol’ Monster in June and July or the 7” Magnum Trick Worm in the dog days of August, you might be shocked to learn he almost never rigs them Texas style like he learned as a teen. Instead the 2-time Toyota Bassmaster Angler of the Year usually rigs them on a stand up style jig head.

“Buckeye Lures makes a wide range of sizes, but most of the time, I’m fishing 12 to 20’ deep in summer, so I use their ½ ounce stand up head, and there’s two reasons for that. First, a stand up style head won’t twist your line like a Texas rig will. Secondly, obviously, it helps the worm to stand-up a lot more vertical as you’re dragging it across the bottom,” he explains.

You only need two colors

Like a lot of lure manufacturers, Zoom makes dozens of colors in each of the two large worm style Swindle uses most. But according to the veteran pro you really only need two. “I throw “plum apple” early in the day, or anytime I’ve got low light, and “green pumpkin” under sunny skies,” he says.

Swindle uses a 7’ 6” medium heavy Quantum rod, and either 12 or 14 pound Sunline Shooter fluorocarbon spooled to a 6.6:1 Quantum Smoke S3 reel when slinging oversized summer worms. “I just feel like by using anything much faster than a 6.6:1, and you might be prone to overfish it. Plus, I like the spool size on the Smoke S3 because it’s compact in the hand, but holds plenty of line for making long cast across deeper structure.”

There’s a strong chance no lure in history has caught more largemouth bass than a plastic worm – especially in hot weather. Try Gerald Swindle’s tips for fishing them this summer, and you’re sure to help keep that trend as prosperous as it’s always been.