Swindle: Don’t Forget About The Possum

Most bass fishing fans know Gerald Swindle for his world-class comedy and angling skills. What they may not know is Swindle has a deep love of lyrics, mostly country music lyrics. Hence he’s quick to parallel spinnerbaits, arguably the greatest bass fishing lure of all time, to country music legend George “The Possum” Jones. 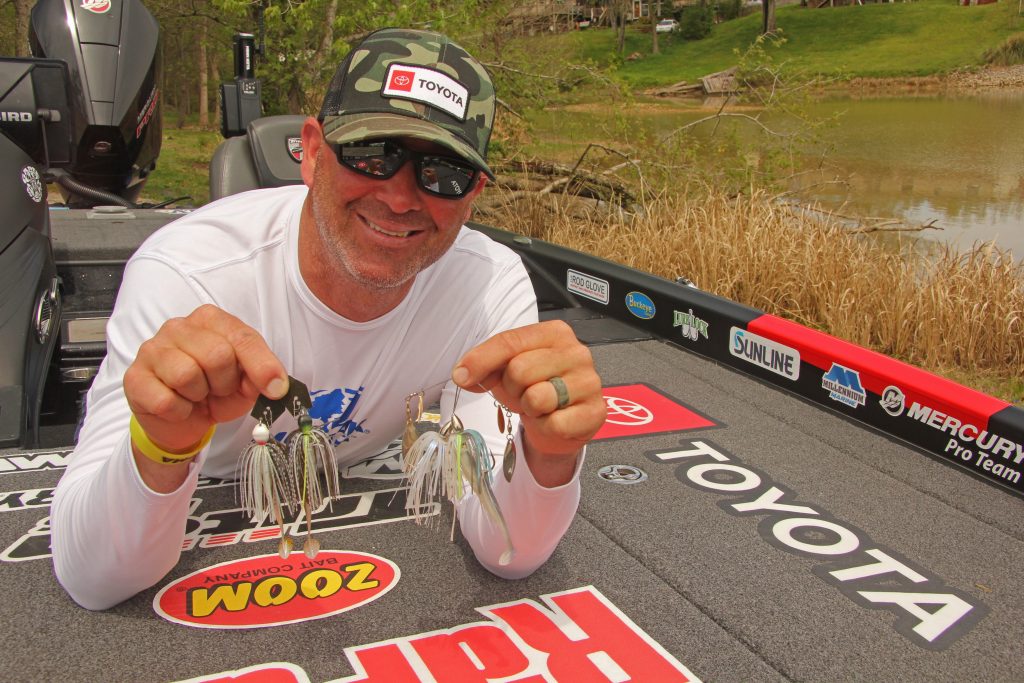 “Just like lures, there are so many new songs released every year it’s easy to get caught up in the new stuff and forget about the proven classics like “He Stopped Loving Her Today”,” says Swindle. “That’s why anytime we start talking about spinnerbaits, I say “Don’t forget about The Possum, fellas.” – because to me, a spinnerbait is a whole lot like George Jones.”

In 1998, Swindle was struggling a bit financially, splitting time between pro tournaments and a job he hated as a house framer, when he rode a spinnerbait through the high waters of Beaver Lake, Arkansas to a $150,000 FLW victory and put down his hammer for good.

“That win launched my career, and I haven’t stopped loving a spinnerbait since,” smiles Swindle. “People think the pros stopped throwing spinnerbaits the last decade, but that’s not necessarily true. Fact is, we were using spinnerbaits to find fish in practice, but when the pressure was on to go catch five fat ones in the derby, we’d switch to a big swimbait or something else.”

“To be honest the new Major League Fishing format has revitalized the spinnerbait. I’ve had two different tackle manufacturers tell me that recently. In MLF, you’re just trying to generate keeper bites, not necessarily fishing for giants, and there ain’t many lures in history that get more bites than a spinnerbait,” says the Team Toyota angler.

Chatterbaits and Spinnerbaits are first cousins

Some anglers might ask how the now highly popular Chatterbait fits into Swindle’s spinnerbait mix. It’s simple. He says they’re in the same family. It’s just a matter of habitat and weather conditions as to which one he throws, and it’s a pretty elementary formula. If there’s rocks, wood, and wind … he’ll likely throw a spinnerbait. If there’s aquatic vegetation, and a lack of wind, he’ll choose a Chatterbait.

“People would be shocked to know how simple I keep my spinnerbait and chatterbait fishing,” says Swindle. “I throw a 5/16 ounce spinnerbait with a Colorado-Indiana blade combo 90-percent of the time. And for Chatterbaits, I always throw a ½ ounce to keep the lure down in the water column a little better,” he explains. “I throw ‘em both on 16-pound Sunline Shooter fluorocarbon spooled on a Quantum Smoke 7.3:1 reel. My trailer for each is a Zoom Boot Tail.”

“The 7’ 2” medium heavy rod I use is a $99 Quantum G-Force, and it’s critical to success with bladed baits, because the biggest mistake most anglers make is using a rod that’s too stiff or too limber with this category of lures. That rod has the perfect combination of tip and backbone,” emphasizes Swindle.

The success Swindle has had since putting down the framing hammer 21 years ago ranks amazingly high in the 50-year history of professional bass fishing – and a whole lot of his accolades can be traced back to spinnerbaits.

“I’d argue a spinnerbait is the most versatile lure ever,” says Swindle. “Don’t make it complicated, folks. Don’t forget about The Possum.”