Swindle: Conroe Will Be a Texas-Sized Test

Amid a Facebook Live post Monday night, reigning Toyota Bassmaster Angler of the Year Gerald Swindle contemplated aloud, “If everything’s bigger in Texas, then maybe the shrimp here could be the size of squirrels.” 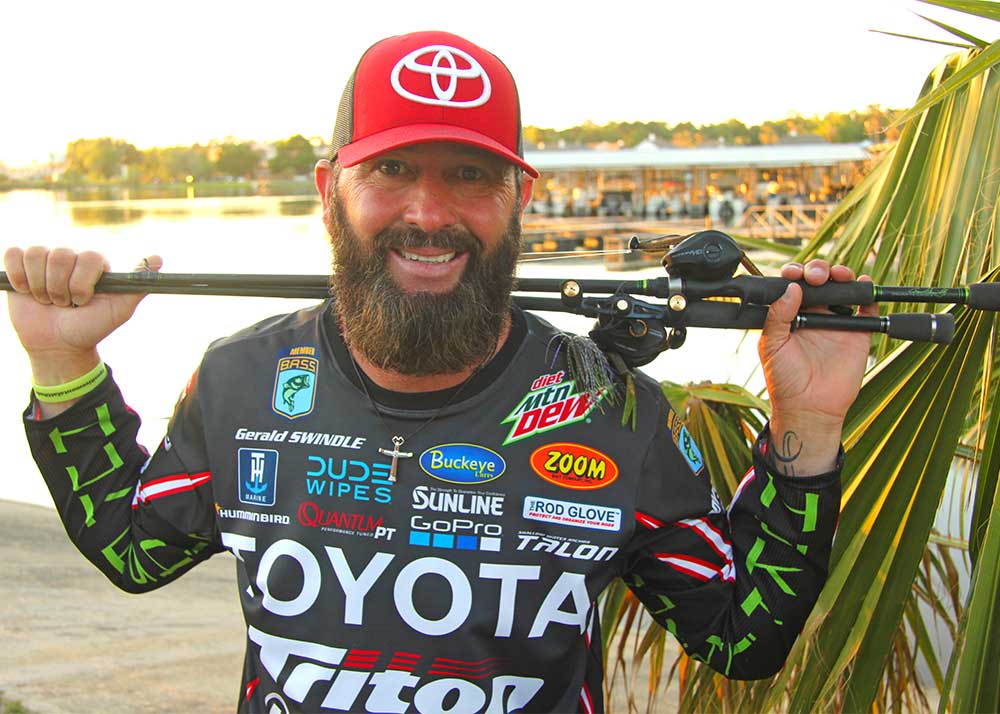 But while all the talk leading into this 2017 Bassmaster Classic has been about records being broken – Swindle’s not sure the 23-pounds per day that VanDam averaged to win in New Orleans in 2011, is truly in jeopardy here.

Fishing Pressure – “The boat traffic here is as intense as anywhere we’ve ever competed,” says Swindle.

While he’s competed on Conroe in four previous Toyota Texas Bass Classics, those were autumn events, when fishing pressure was far less.

A “Big Bass” tournament already had 900 people fishing on Conroe earlier this month. And while this lake is hugely popular for bass fishing, add-in all the pleasure boat traffic between its seawalls, and it’s understandable the largemouth are likely to be a bit more fickle in March than October.

“It took 27 pounds to win a team event here the other day, but I’ve got a feeling some of those fish may have come from spawning beds, and honestly there’s just not much clear water here to focus on catching spawning fish for three days,” says Swindle.

Fat Singles Versus Big Schools – While Swindle says there are bass in all three phases of the spawn right now; the likelihood of finding an offshore mega-school is a long shot.

“This lake has never been a place with numerous schools of big fish – it’s got some giant bass in it – but it’s not like the Tennessee River where several guys can locate a school that might have a giant limit of fish in it,” he explains.

5 Lures for 5 Fish Each Day – When asked to name five lures fans could expect to see most of the 52 competitors using this week, Swindle promptly rattled off the following as though you had asked for his phone number: ChatterBait, Spinnerbait, Jigs, Strike King Series 5 crankbaits, and a weightless Senko.

Finally, We’re Not Freezing – For years the Bassmaster Classic was a summertime event, but in 2006, it was moved to the February-March timeframe, and that’s brought frostbite threatening temperatures to venues like Tulsa, Oklahoma and Greenville, South Carolina.

It’s also brought a run of less than optimal performances for Swindle in the late winter derbies.

“I’ve qualified for 9 of the 11 Classics they’ve had in the winter, and if we’d have been dove hunting, I wouldn’t have cut a feather,” he says with self-depreciating humor.

“I’ve laid down a whole string of 26 and 27th place finishes, but finally I’ve got a Classic where I can feel comfortable enough to move around and make something happen,” he says.

“Nope, not gonna complain about the weather – that’s for sure,” says Swindle. “For the first time in years, you’ll actually be able to see who my sponsors are, because I won’t be dressed in long johns and covered up like an Eskimo.”

What Will it Take to Win? – “I’m gonna say if you average 20-pounds per day you could win,” says Swindle. Which is significantly less than what VanDam won with in New Orleans six years ago.

“There may be a 30-pound limit weighed-in here, and it just might be me – but you’re not gonna see those giant limits caught everyday.”

“I know this, I’m boat #1 at morning takeoff – and that counts for a lot here too,” grinned Swindle, who earned that top position as reigning Toyota Bassmaster Angler of the Year.

A shot at a 30-pound limit, shrimp the size of squirrels, and tall thermometers with high temps in the 80s – maybe everything is just a little bit bigger in Texas.