Gerald Swindle and Kevin VanDam share longtime sponsors Toyota and Quantum, as well as an amazing 9 Toyota Bassmaster Angler of the Year titles between the two of them, and on the eve of the first Bassmaster Elite Series tournament of 2018, they were gracious enough to share their thoughts on Lake Martin, Alabama. 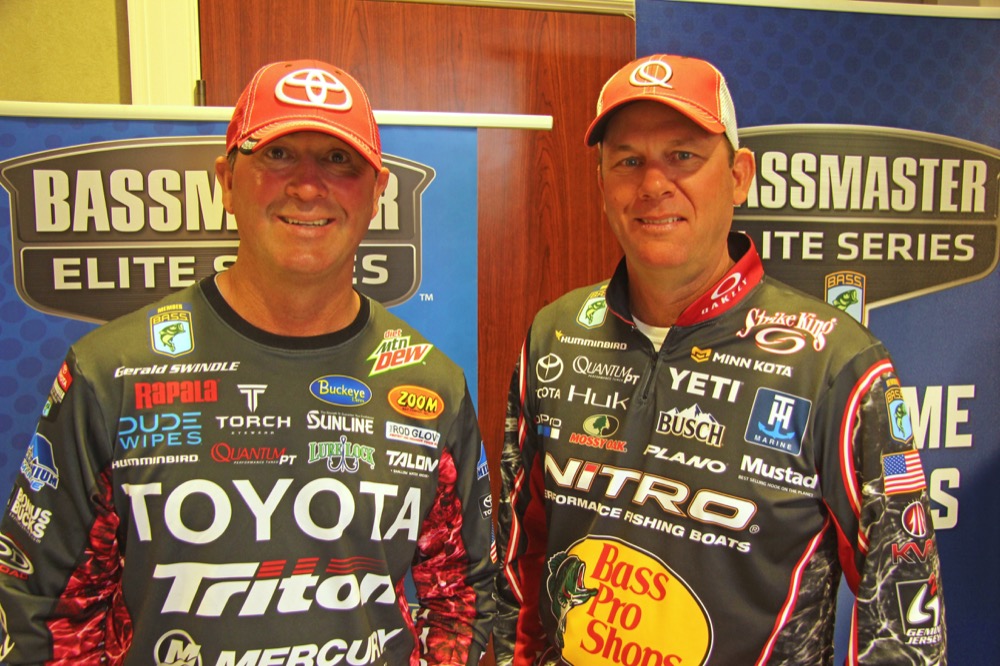 1.) It’s a brand new season, but what was your favorite part of the off-season this winter?

Swindle: Being in the tree with my wife LeAnn when she arrowed a great 130” whitetail buck in Illinois that I called in for her with a ‘snort wheeze’ and video taped the whole thing too.
VanDam: Christmas with all my family, and it was especially good because my nephew Steve got married immediately after Christmas, and that caused all the family to hang out even more together.

2.) Will all the rain that fell today, and is forecasted to fall throughout the weekend, make fishing better or worse on Lake Martin?

Swindle: I don’t think it will have much of an affect one way or the other, because I think the dirt and mud will settle faster than people might think.
VanDam: I think the rainy weather will make it better, because anytime you have a low pressure system fishing tends to improve, and besides that, it’s not a cold rain, it’s a fairly warm rain, dumping water into a lake that’s about 48 to 52 degrees.

3.) Name 3 lures fans can expect to see the pros use a bunch this week.

4.) When Mike Terry won the B.A.S.S. event here in the early winter of 1994, he won by 14 pounds. Can anybody separate himself that far from the second place guy in this tournament?

Swindle: I don’t see that happening. In fact, I think you’re gonna see the tightest weights since the 2005 Bassmaster Classic in Pittsburgh.
VanDam: It’s possible – if a local like Matt Herren, Russ Lane, Greg Vinson, or Kelley Jaye gets on the motherload. Hey, it happened before here 24 years ago – so why couldn’t it happen again?

5.) How much weight will you need to average each day to make the Top 12 cut here on the final day?