After a grinder of a practice period, Caleb Sumrall came into the Bassmaster Elite Series at Santee Cooper Lakes hoping to catch enough to earn himself a $10,000 check and some valuable Angler of the Year points. At the conclusion of today’s weigh-in, Sumrall sits tied for 25th place with 13-pound 11-ounces. He’s halfway to achieving his goal, but it’s been anything but easy. 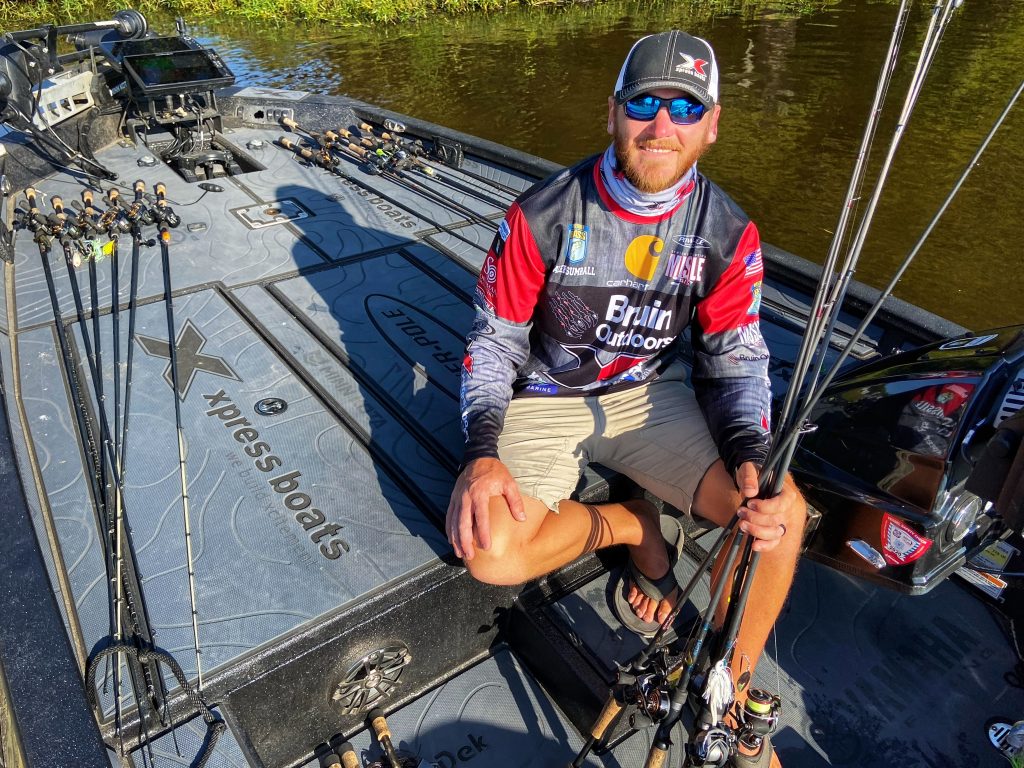 The Carhartt pro had 22 rods laid out on the front and back decks of his Yamaha powered Xpress bass boat when he idled into the John C. Landing III boat dock today. That’s typically not a great sign at an Elite Series tournament, but Sumrall explained more rods than usual is indicative of fall fishing.

“Fall has always been a junk fishing deal for me,” Sumrall said. “I may only make one or two casts with some of these rods throughout a 9-hour day on the water. But showing them something different and having the kitchen sink ready to throw at the fish might give me that one key bite.”

One key bite is crucial no matter the time of year, but especially this week on Santee Cooper when keeper bites have been hard to come by. Sumrall uses different lures, colors, or line sizes depending on each specific spot he fishes and the type of structure it offers.

“Bass are super scattered during the beginning of the fall transition,” Sumrall explained. “That’s why you see so many anglers with a huge pile of rods and lures out. You really have to keep an open mind this time of year.”

Of the five keeper bass he weighed in, Sumrall used three different baits, and he caught keeper fish on at least six different baits throughout day one.

Tough fishing and 90-degree “fall” heat can make for a long day on the water, but the Louisiana native had more on his mind than just catching bass today. Yet another hurricane is barreling down on his home state and is expected to make landfall tomorrow.

“The last model I looked at showed it heading right for the area I live,” Sumrall said with somber realization. “I’ll be praying for Louisiana tonight while I work on tackle. Praying for all the people down there and hoping my house is still standing when I get home. Man, it’s been a crazy year.”