COLUMBIA, S.C. (Aug. 12, 2017) – FLW Tour pro Brandon Cobb of Greenwood, South Carolina, continued his momentum Saturday at the 2017 Forrest Wood Cup on Lake Murray , the world championship of professional bass fishing, weighing in a five-bass limit totaling 19 pounds, 4 ounces – his second straight day with a 19-plus pound limit. With a two-day total of 10 bass weighing 39 pounds even, Cobb will lead the final 10 pros who will fish Sunday for $300,000 cash – the top award in professional bass fishing. 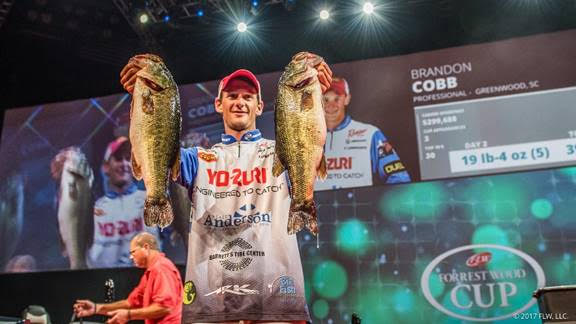 Anglers began competition Friday in Columbia, South Carolina, with the full field of 53 anglers competing. Tour rookie Justin Atkins of Florence, Alabama, jumped out to the early lead Friday with a 21-pound, 5-ounce limit, with local anglers Anthony Gagliardi of Prosperity, South Carolina, and Cobb of Greenwood, South Carolina, close behind. Saturday, Cobb (39-0) jumped to the top of the leaderboard while Atkins (37-3) slipped to second and Gagliardi (36-1) fell to third.

“This is pretty crazy,” said Cobb, who is appearing in his third-career Forrest Wood Cup after finishing third in 2015 and ninth in 2016. “I’m really amazed, because I had no idea that I had that much weight today. I really thought that I had about 16 pounds and I thought that I’d be in third place. To be leading the Forrest Wood Cup going into the final day – it really hasn’t sunk in, yet.

“Today actually seemed bad,” Cobb continued. “I know 19 pounds doesn’t seem bad, but I kind of got in a bad rotation today. Yesterday I caught between 20 and 25 fish, and I left them biting. Today, I caught seven. I’m hitting around 40 different places, but I’ve got about 20 areas where I’m pretty confident that I can get a bite. The other areas have fish but they don’t always bite.”

Cobb said that all of his fish have come via topwater baits. He said he’s fishing three different hard baits and a fluke, changing things up based on the weather conditions.

“Yesterday I was throwing popping-style baits, and today I fished a couple of places with it and didn’t catch any. I knew they were still there, so I picked up a Yo-Zuri Saltwater Pencil – a bigger pencil-walking bait, but it’s a saltwater size – and I caught a few on it. It’s really a conditional thing.

“I’m really excited to get back out there tomorrow and see if I can finish this,” Cobb went on to say. “I love August fishing and I love high-pressure tournaments – I always have.”

The top 10 pros that advanced to the final day of competition on Lake Murray are:

Finishing in 11th through 20th are:

The final 10 anglers will take off from Dreher Island State Park located at 3677 State Park Road in Prosperity, at 7 a.m. EDT Sunday morning at the Folger’s Morning Takeoff. Sunday’s championship weigh-in will be held at the Colonial Life Arena located at 801 Lincoln St., in Columbia, beginning at 5 p.m.

Fans will be treated to the FLW Expo at the Columbia Metropolitan Convention Center located at 1101 Lincoln St. in Columbia, Sunday from 10 a.m. to 4:30 p.m. prior to the final weigh-in. The Expo includes games, activities and giveaways provided by more than 40 FLW sponsors, the opportunity to shop the latest tackle and outdoor gear from more than 100 exhibitors, Ranger boat simulators, a casting pond and a trout pond for children, as well as the opportunity to meet and interact with top professional anglers, including Hank Parker, Jimmy Houston and Byron Velvick. FLW’s namesake Forrest L. Wood, the legendary founder of Ranger Boats, will also be greeting fans.

On Sunday the first 500 children 14 and under in attendance at the Expo who are accompanied by an adult will receive a voucher to redeem for a free Kid Caster’s no-tangle, rod-and-reel combo courtesy of WLTX 19 after the evening’s weigh-in. Also on Sunday one lucky fishing fan will win a brand new Ranger Z521C bass boat with a 250-horsepower Evinrude outboard motor courtesy of 97.5 WCOS radio. The Ranger Boat giveaway is free to enter but the winner must be present at the conclusion of Sunday’s final weigh-in to win.

FLW fans will also be treated to the Bass & BBQ Festival in conjunction with the FLW Expo. FLW and the South Carolina BBQ Association have partnered to feature award-winning BBQ teams offering delicious fare to visitors at the Forrest Wood Cup Expo. A portion of all proceeds will be donated to local South Carolina charities.

Country music superstar Easton Corbin will perform a free concert on the weigh-in stage at Colonial Life Arena on Sunday starting at 4 p.m., prior to the final weigh-in. The concert is presented by 97.5 WCOS radio. With two No. 1 singles, multiple awards and nominations, plus performances on some of the biggest stages in the world, Mercury Nashville’s Corbin has made a lasting impression on the country music landscape. He is lauded for his traditional country sound, authentic lyrics and mastery of understatement. American Songwriter says, “Easton Corbin has one of those rare, glorious voices that was made – just made – for singing country music.”

The Folger’s Morning Takeoff, FLW Expo, Bass & BBQ event, live concert and weigh-ins are all free and open to the public. The event is hosted by the Capital City Lake Murray Country Regional Tourism Board.