Smith and Hamburger Fish Through Adversity

When Taylor Hamburger and Carson Smith weighed 14-lbs and 15-ounces of Tenkiller Lake bass today for day one of the Carhartt Bassmaster College Series National Championship presented by Bass Pro Shops, you’d have thought these local anglers had it easy. 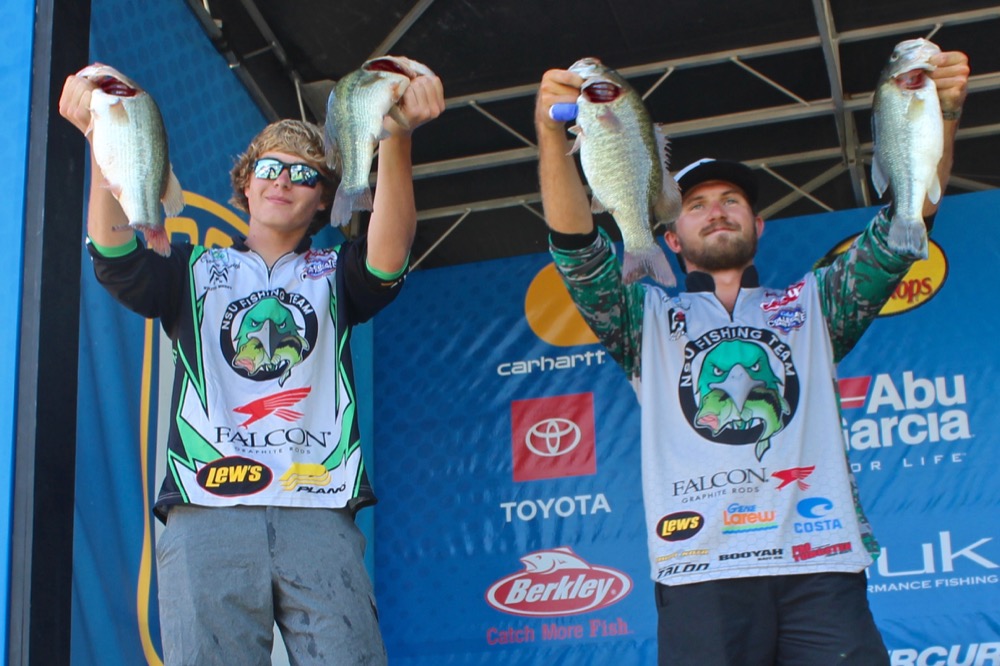 Hamburger and Smith go to school here at Northeastern State University (NSU), the hosting campus for the 2018 National Championship here in eastern Oklahoma. When the National Championship location was announced for Tenkiller, their home lake, the NSU anglers knew they had an incredible opportunity.

As today’s weigh-in concluded, Hamburger and Smith were sitting in 4th place, but the day was anything but easy. Carson Smith is fishing through a finger injury he sustained in a freak accident last week, and both anglers had to stay focused after a disappointedly slow start to their day.

“I was at work last week sitting on top of a forklift,” said Smith. “The forklift had a pinch point that my right hand was hanging on to. When the forklift rose up, it smashed my pinky on my right hand, which is also my casting hand. Ultimately, the doctors had to amputate half of my pinky finger.”

While his mind was first on his own well being, Smith’s thoughts immediately jumped to the National Championship and how this injury would affect his performance.

“The accident happened exactly one week ago – a week before the biggest tournament of my life,” said Smith, a senior studying Environmental Health and Safety. “Of course I was stressing out. I was thinking, oh no, am I even going to be able to fish? The day after the accident my whole hand was hurting incredibly bad, but I still went and dug a fishing rod out of the boat to make a few casts. It was painful, but I knew I’d be able to work through it.”

That’s an impressive example of a college athlete dedicated to their craft and willing to play hurt. But the NSU Riverhawk’s difficulties didn’t end there, they also had to labor through a slower than expected start to their day one.

“We didn’t have a keeper in the boat until 11:00 today,” said Hamburger, a sophomore studying construction management here in Tahlequah, Oklahoma. “It took us half the day, but when we got that first keeper bite it really clued us into how we needed to be fishing. After some running and gunning, we had five solid keepers and laid off our fish around 1:00 p.m.”