Scott Rook of Little Rock, Ark., had the heaviest two-day total of bass, 10 pounds, 14 ounces, on the third day of the Mossy Oak Fishing Bassmaster Classic Bracket on Carters Lake out of Elijay, Ga. The final round of competition will begin on Friday where the six advancing anglers’ weights will start back at zero, and the winners of each match will advance to the 2019 Bassmaster Classic presented by DICK’S Sporting Goods. 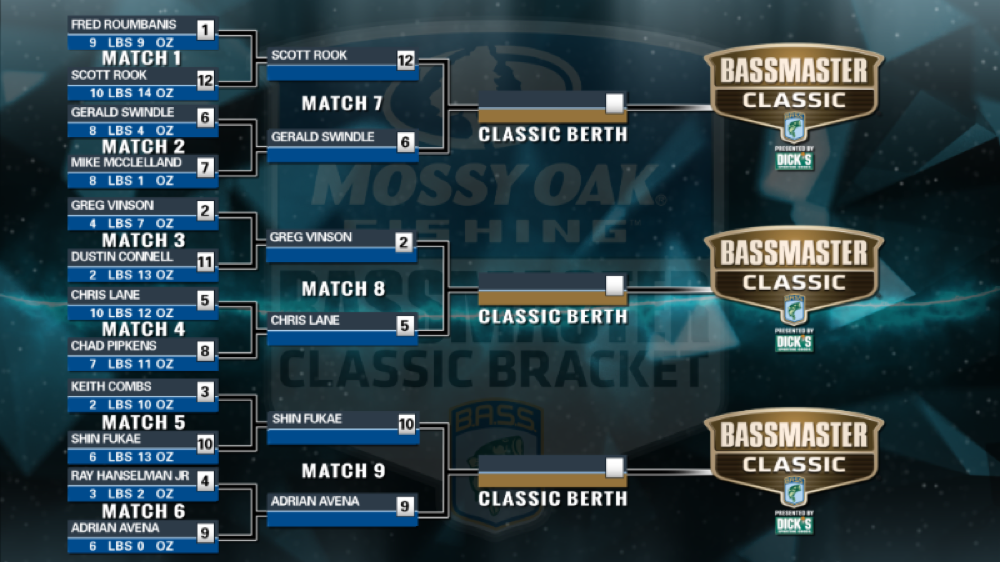 ELIJAY, Ga. — The picture is steadily growing clearer at the Mossy Oak Fishing Bassmaster Classic Bracket on Carters Lake, with the two-day semifinal round now complete and six anglers qualified for Friday’s finals.

A trio of head-to-head matchups on Friday will pit Gerald Swindle vs. Scott Rook, Chris Lane vs. Greg Vinson and Adrian Avena vs. Shin Fukae. The anglers’ weights will start back at zero, and they will fish from 8 a.m. to 2 p.m. ET with the winners of each match advancing to the 2019 Bassmaster Classic presented by DICK’S Sporting Goods.

Lane had one of the most impressive days Thursday, landing three big spotted bass that weighed 8 pounds, 9 ounces. Combined with the 2-3 he caught Wednesday, it gave him a two-day total of 10-12 that was more than enough to win his match against Michigan angler Chad Pipkens, who finished with 7-11.

“Knowing I had a little bit of a lead allowed me to fish with an eye toward tomorrow,” said Lane, a former Bassmaster Classic winner who lives in Alabama. “Tomorrow’s going to be amazing with a Classic berth on the line. It’ll either be really exciting or really disappointing.”

Lane’s biggest bass came at 8:18 a.m. when he landed a gigantic 4-10 spotted bass near a boat dock. He added two more fish on a Whopper Plopper the rest of the way to seal the win.

Pipkens caught a nice bass on a jerkbait with just over 30 minutes remaining in the morning session to keep pressure on Lane. But it wasn’t enough.

“I don’t think I would have made any different decisions today except maybe picking up a jerkbait a little earlier,” Pipkens said. “But that’s the way it goes. I’m already looking forward to next year.”

Also during the morning session, Swindle caught two bass that weighed 1-7 and pushed his two-day total to 8-4. It was enough to help him pass Arkansas pro and longtime friend Mike McClelland, who finished with 8-1.

“Mike is one of my best friends ever,” said Swindle, a veteran Alabama pro. “So that was like one of the most joyous sucking victories of my life. I hate it because it seemed like the two of us had the biggest weights, but that’s how this format works.”

Avena, who makes his home in New Jersey, caught just one bass during the morning session, but still managed to win his match with Texas angler Ray Hanselman Jr. Avena’s two-day total of 6-0 — which was helped greatly by the 4-15 he caught Wednesday — was nearly 3 pounds better than that of Hanselman’s 3-2.

The story of the afternoon session was the amazing comeback by Rook.
The veteran Arkansas pro, who has announced his intentions to retire when the season is over, zeroed Wednesday and came into the day trailing Arkansas angler Fred Roumbanis by 6-13. But Rook, who primarily used a Whopper Plopper, caught five bass that weighed 10-14 and slipped by Roumbanis who managed only two fish and finished with 9-9.

“From zero to hero, daddy,” Rook quipped as time expired. “The weather made a difference today. After a full moon at night, they just don’t bite in the mornings — and I couldn’t catch them when I had to fish the morning session yesterday.

“I was bound and determined to catch them on a Plopper, and with this cloud cover it worked out.”

Roumbanis, who had been one of the most consistent anglers since the tournament began with the seeding round Tuesday, seemed baffled by his struggles Thursday.

“Hat’s off to Scott,” Roumbanis said. “Even if I was fishing tomorrow, I wouldn’t have anything to fish. But it was a great tournament.”

Vinson, an Alabama pro who caught 4-7 Wednesday, didn’t boat a fish during Thursday’s afternoon session. But that total of 4-7 was still enough to help him past Alabama pro Dustin Connell, who caught 2-8 Thursday and finished with a two-day total of 4-1.

Texas pro Keith Combs caught one fish Wednesday and one more Thursday for a two-day total of 2-10. He lost his head-to-head match with Fukae, who finished with 6-13.

Friday’s full-day event will utilize the catch-weigh-release format with all bass weighed on the water and immediately released. The action will be carried live on Bassmaster.com.