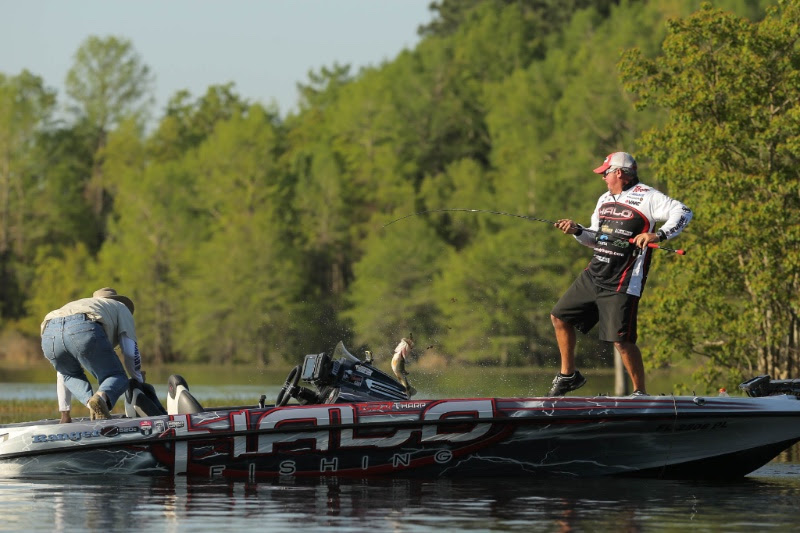 But the 110 anglers taking part in next week’s Bassmaster Elite at Toledo Bend presented by Econo Lodge might be hitting the 185,000-acre lake on the Louisiana/Texas border at the best possible time to bring giant largemouth bass to the scales.

Matt Loetscher, who guides at Toledo Bend for Living the Dream Guide Service, said the fish are positioning just right to provide an amazing show on Bassmaster LIVE and on the weigh-in stage.

“We’ve got a lot of fish locking on beds,” Loetscher said. “Just this week, we’ve had a pretty major wave of spawning fish moving onto the beds.

“It wouldn’t surprise me a bit if the tournament was won sight fishing.”

The conditions do seem to be lining up perfectly for a sight-fishing event.

The water is crystal clear, which will allow anglers to roam the shadows and easily spot bedding bass. Plus, the bass are bedding in some conspicuous areas due to a lack of thick cover they’ve enjoyed in the past.

“A big difference that the guys are going to find compared to the past few years is the lack of hay grass,” Loetscher said. “So much of the hay grass grew up on dry land when we had the drought conditions a few years back. It stayed rooted in after the water rose and made these great mats everywhere, and we smashed the fish.”

But then Mother Nature evened the score.

“Now we’ve had floods two years in a row,” Loetscher said. “That not only killed a lot of hydrilla, but we also lost a lot of our hay grass on the main lake. They’ve sprayed a lot of it, unfortunately.”

While the loss of habitat is an alarming situation that local anglers want to see addressed in the near future, it could mean some easy fishing for the Elite Series pros.

“The lake is clean and clear and little bit lower than it was the last two times they were here,” Loetscher said. “With the water being down, they don’t have any bushes to hide in. They’ll be spawning on stumps or alligator grass or whatever they can find.”

This will be the 23rd visit to Toledo Bend for B.A.S.S. — and this year’s event will have a long way to go just to match the drama and excitement generated by last year’s trip.

That 2016 Elite Series event marked a return to the winner’s stage for Kevin VanDam, the legendary Michigan pro who hadn’t raised a first-place trophy the previous five years.

He won with 96 pounds, 2 ounces, pushing his career win total to a B.A.S.S.-record 21. He would go on to win twice more during the Elite Series regular season in 2016, but he left Toledo Bend feeling like he hadn’t tapped the lake’s full potential.

“My goal was to catch at least 100 pounds for four days,” said VanDam, who still doesn’t own one of the coveted “Century” belts awarded to anglers who finish Elite Series tournaments with triple-digit weights. “I know I could have had that because the fish really just set up perfectly for me.”

Toledo Bend currently reigns at the top of Bassmaster Magazine’s 100 Best Bass Lakes list, a distinction it also held in 2015. If the lake does give up one or more 100-pound catches, it will have a strong argument for a third consecutive “Best Bass Lake” title.

Last year’s tournament was a postspawn event in May, and VanDam fished deep-water ledges with big crankbaits — the Strike King 6XD, 8XD and 10 XD — in a variety of colors, including sexy blueback herring and bar fish. He said the latter color in the 10XD pattern perfectly mimicked the yellow bass that big largemouth feed on at Toledo Bend.

This year, Loetscher expects the tournament to be won shallow with an array of popular methods.

“There’s a little bit of a shad spawn going on, and some guys will probably fish that early in the morning,” he said. “I think the shad spawn, sight fishing, flipping and frogging will all play into it.

“That could make for a really fun tournament.”

The event is hosted by Toledo Bend Lake Country.