Don’t be shocked if Florida pro Terry “Big Show” Scroggins makes a splash at the 2018 Academy Sports + Outdoors Bassmaster Elite at Grand Lake. Actually … a “double splash” … the nickname Scroggins and other serious anglers often give the Carolina Rig based on its two-part componentry consisting of both a heavy lead egg sinker and a soft plastic lizard. 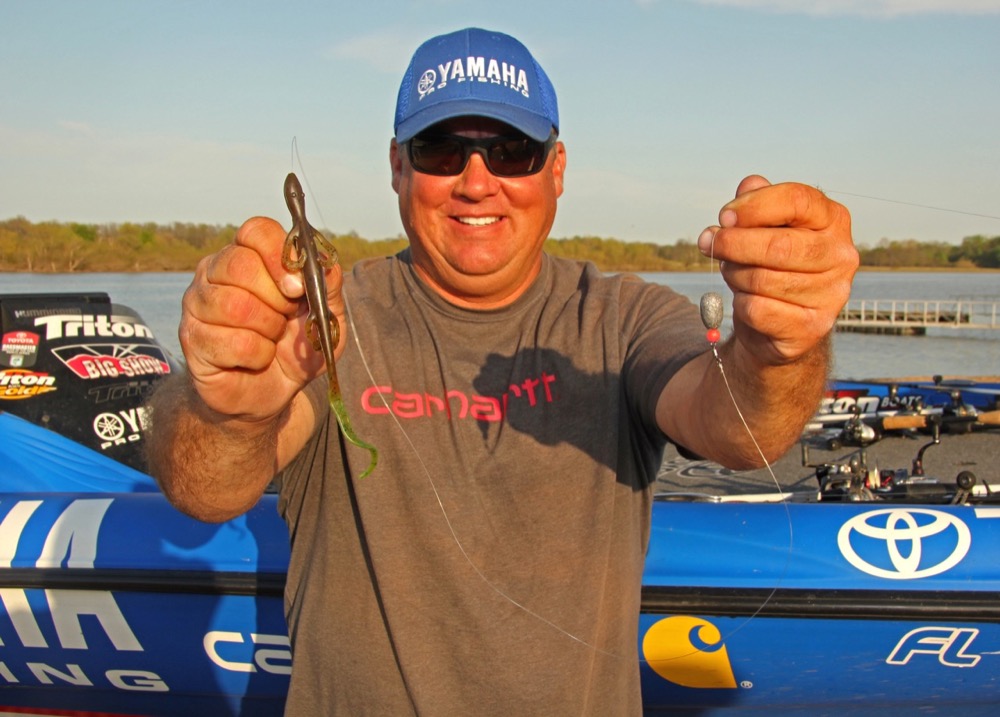 “I guess it gets a bad wrap because people think it’s a lazy man’s way of fishing. But it weighs enough that just about anybody can cast it, even on a windy day. Plus, you can cover a lot of water with it, and it gets a ton of bites,” says Scroggins.

“It’s definitely considered an old school technique that’s been put on the back burner and kind of forgotten. And part of the reason it’s been shelved is because we have lures now days like the 10XD crankbait that will get down to the bottom in 25-feet of water,” says the Carhartt pro who loves to cook.

“Back in the 1980s and 90s we didn’t have lures like the 10XD, so we had to depend on a Carolina Rig with a 1-ounce sinker to get a lure down to those deep zones,” explains Scroggins.

While some like a lighter weight for Carolina-rigging, Scroggins has always favored a 1-ounce egg sinker much like many anglers use for catfishing, and even saltwater fishing.

“I can throw that particular weight into 5 feet of water or 25 feet of water and it’ll come across the bottom without getting hung up because the egg-shape tends to roll really good. Especially if there’s any current at all,” says the longtime Toyota pro.
Grand Lake is ideally suited for a Carolina Rig due to its 45,000 acres of rocky shoreline where anglers like “Big Show” are forced to explore a lot of flat rocky points holding pre-spawn bass in a short three-day practice period.

“I can make three casts with a Carolina Rig for every one cast I’d make with a jig on a rocky point. And if you look at this egg sinker, you can tell by the way it’s scuffed up so bad that I’ve definitely been dragging it a ton in practice. It’s supposed to be a 1-ounce, but I think I’ve drug it around so much, it’s now ground-down to about a 3/4 ounce,” laughed the always comical Scroggins.

In addition to the heavy egg sinker, Scroggins typically spools up with 15-pound fluorocarbon, and uses a four to five foot long leader also made of fluorocarbon. His lure of choice is a green pumpkin lizard, but he’ll often bump-up to the 8” magnum size lizard in off-colored pre-spawn waters like he’s dealing with at Grand Lake.

While the legendary fishery situated in extreme Northeast Oklahoma on the Kansas, Missouri and Arkansas borders has recently hosted two Bassmaster Classics, its history of hosting regular season B.A.S.S. events is relatively minimal.

However, one of those B.A.S.S. events on Grand Lake o’ the Cherokees was held in early April 1995, back when acid washed jeans were fashionable — and so was the Carolina Rig — which was exactly the lure legendary East Texas pro Tommy Martin used to catch an average of 17-pounds per day for the victory.