Schmitt Leads Day One of FLW Tour at Lake Okeechobee

CLEWISTON, Fla. (Jan. 25, 2018) – Maryland Pro Bryan Schmitt surprised even himself on Thursday. The six-year FLW Tour veteran caught a five-bass limit weighing 24 pounds, 11 ounces, to take the lead on opening day of the 2018 season at the FLW Tour at Lake Okeechobee. The event, presented by Evinrude, features a field of 376 of the world’s best bass-fishing professionals and co-anglers casting for top awards of up to $125,000 cash in the pro division and up to $25,000 cash in the co-angler division. 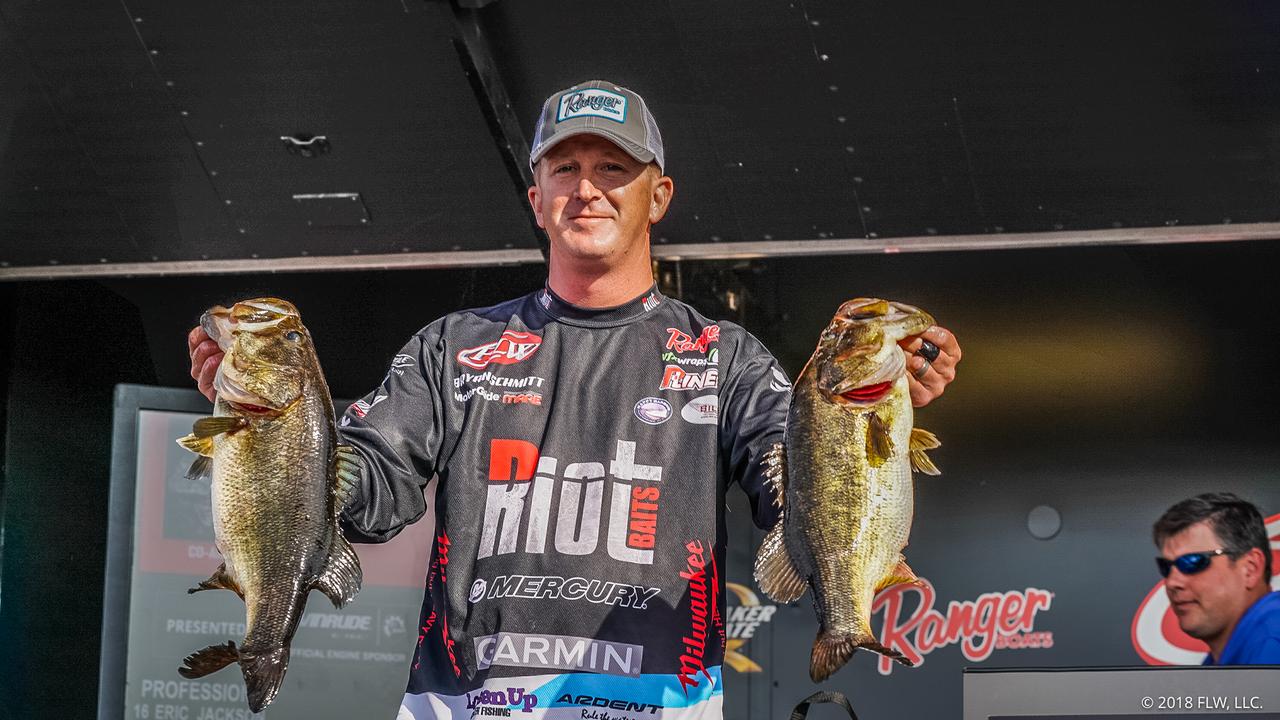 The weather conditions in central Florida were good Thursday despite a brisk north wind that prompted Tournament Director Bill Taylor to advise anglers to use the protected canals and rim ditches instead of trying to make a run across the middle of the lake. The main challenge for tournament anglers was finding clear water.

“This was not expected,” said Schmitt, a two-time Forrest Wood Cup qualifier who has 10 wins in FLW competition – all on rivers and tidal fisheries. “The final afternoon of practice I found one spot where I got a ton of little bites. I decided to go there today and I guess that they have grown up a little bit.”

Schmitt caught all of his bass – including a pair of 6-pound, 13-ounce largemouth – from his one spot, throwing just one bait.

“I hammered it, all day,” he said. “An hour and a half in, I changed the bait and started throwing something that I hadn’t thrown, but it’s a bait that I have a lot of confidence in. It was like a lightbulb went off and every one of my fish came on that bait.

“I really hope it doesn’t get dirty,” Schmitt continued. “Towards the end of the day the wind was starting to put mud in there and if it (wind) changes a hair, it’s done. The problem is that my only other place where I caught any fish in practice is so far away that I don’t know if I’ll have enough fuel to make it there. That’s a big problem.”

Schmitt credited his “lucky” co-angler Darlene Ferguson of Tehachapi, California, as another factor that contributed to his success.

“She caught two fish and she’s really good luck,” he went on to say. “She has a reputation among some of the pros as being really good luck to have in the boat with you.”

The top 10 pros after day one on Lake Okeechobee are:

Johnston earned the day’s $500 Simms Big Bass award in the pro division thanks to an 8-pound, 4-ounce largemouth.

Pro competitors Andy Young of Mound, Minnesota, and William Campbell of Middlesboro, Kentucky, were involved in a boat collision on Lake Okeechobee Thursday afternoon. The collision happened while both anglers were running the lake and met at an intersection, with Campbell’s boat striking the port (left) side of Young’s boat. Young and his co-angler were ejected, but were able to return to their boat after Young’s mandatory ignition shutoff device disengaged the engine. Both boats were able to return to the launch site at the Clewiston Boat Basin and the accident is under investigation by the Florida Fish & Wildlife Conservation Commission. Young decided to seek medical attention upon his return to the ramp. Young’s catch was weighed and he finished the day with five bass weighing 10 pounds even, good for 117th place, while Campbell was late in his return to check-in and did not weigh in.

The top 10 co-anglers after day one on Lake Okeechobee are:

Roberts earned $250 for the Simms Big Bass award in the co-angler division with a 9-pound, 7-ounce largemouth.

Overall there were 643 bass weighing 1,242 pounds even caught by 172 co-anglers Thursday. The catch included 86 five-bass limits.

In FLW Tour competition, pros and co-anglers are randomly paired each day, with pros supplying the boat, controlling boat movement and competing against other pros. Co-anglers fish from the back deck against other co-anglers. The full field of 376 anglers competes in the two-day opening round. Co-angler competition concludes following Friday’s weigh-in, while the top 30 pros based on their two-day accumulated weight advance to Saturday. Only the top 10 pros continue competition Sunday, with the winner determined by the heaviest accumulated weight from the four days of competition.

The total purse for the FLW Tour at Lake Okeechobee presented by Evinrude is more than $930,000, including $10,000 through 60th place in the Pro division. The tournament is hosted by Roland & Mary Ann Martin’s Marina and Resort and the Hendry County Tourism Development Council.

Prior to the weigh-ins Saturday and Sunday, Jan. 27-28, FLW will host a free Family Fishing Expo at Roland & Mary Ann Martin’s Marina and Resort from noon to 4 p.m. each day. The Expo is a chance for fishing fans to meet their favorite anglers, enjoy interactive games, activities and giveaways provided by FLW sponsors, and learn more about the sport of fishing and other outdoor activities.

Also for youth, the FLW Foundation’s Unified Fishing Derby will be held at the marina on Saturday, Jan. 27 from 9-11 a.m. The event is hosted by FLW Foundation pro Cody Kelley along with other FLW Tour anglers, and is free and open to anyone under the age of 18 and Special Olympics athletes. Rods and reels are available for use, but youth are encouraged to bring their own if they own one. The 1st and 2nd place anglers that catch the biggest fish will be recognized Saturday on the FLW Tour stage, just prior to the pros weighing in.

Television coverage of the FLW Tour at Lake Okeechobee presented by Evinrude will premiere in high-definition (HD) on NBC Sports Network (NBCSN) March 28 from Noon-1 p.m. EST. The Emmy-nominated “FLW” television show airs on NBCSN, the Pursuit Channel and the World Fishing Network and is broadcast to more than 564 million households worldwide.