Matthew Robertson of the Kentucky B.A.S.S. Nation team trail leads the first day of the 2018 Bassmaster Team Championship Classic Fish Off on Harris Chain of Lakes, out of Leesburg, Fla., with 25 pounds, 10 ounces. 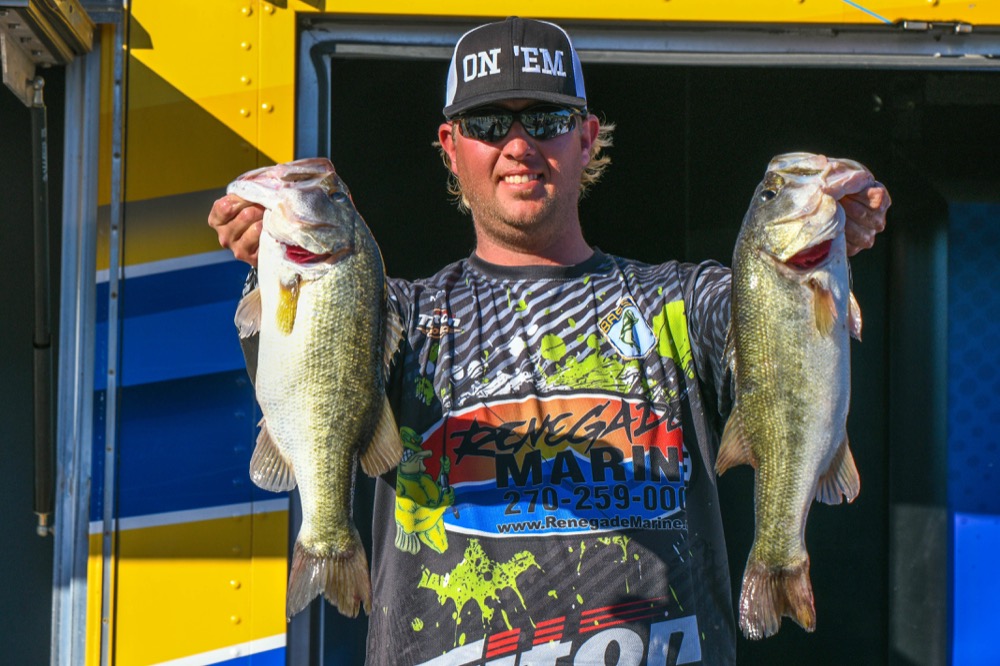 LEESBURG, Fla. — Matthew Robertson has been wearing a hat the past few days that pretty much sums up his experience this week on the Harris Chain of Lakes.

“ON ‘EM,” the hat reads in block white letters against a black field.

Robertson was “on” the Florida-strain bass yet again today, the first round of the Bassmaster Classic Fish-Off — a tandem event that followed the Bassmaster Team Championship held here earlier this week.

Robertson caught a five-bass limit today that weighed 25 pounds, 10 ounces. That put him more than 4 pounds ahead of Jayme Copenhaver III of the Chattanooga (Tenn.) Team Trail; Copenhaver caught a 21-6 limit Friday.

Members of the top three duos from the Team Championship qualified for the fish-off, which offers a single berth in the 2019 Bassmaster Classic presented by DICK’S Sporting Goods to the top finisher. After fishing alongside each other all week — all year, in fact — the teammates had their weights zeroed today as they began competing individually on the Harris Chain.

Though there’s still a full day of competition remaining, Robertson certainly looks like he could become the angler to fill the 52nd and final spot in the world championship of bass fishing. The 32-year-old Kuttawa, Ky., resident teamed with Kentucky B.A.S.S. Nation partner Wendell Anderson to finish second in the team tournament earlier this week. They bagged a 29-1 limit on Thursday (the heaviest of the two-day event) to leapfrog dozens of teams and reach the fish-off.

Robertson’s 25-10 today was the second heaviest bag weighed this week — trailing only the 29-1 he and Anderson posted a day earlier. After launching from Ski Beach Park at 6:45 a.m. ET, Robertson headed to Lake Harris, where he needed only an hour to catch a limit.

He upgraded his catch a few times later in the morning, but with more than 25 pounds in the livewell, the hardest work of the day was done.

His heaviest bass weighed 5 3/4 pounds, and the lightest was a 4 1/2-pounder, which proved the consistency of the bite he’s located here in the central Florida fishery.

“I’m just going out there and fishing my style,” Robertson said. “The fish are there. I’ll just see if I can get five bites.”

Robertson wants to fish professionally, and he said he’s spent the past 20 years preparing for the chance to compete in the Bassmaster Classic. With only one day of solid fishing between him and his lifelong goal, his confidence is high.

“I’m fishing calm and collected,” he said. “I’m making the right decisions and not letting my emotions get the best of me. I’m ready for this.”

So is Copenhaver, it appears.

After Robertson wowed the crowd with his 25-plus pounds, Copenhaver slipped onto the stage and threw up his own impressive limit. He’s 4-4 behind the leader, but said the right bites are there to overcome the deficit. He had the big bass on Friday (a 6-12) to prove it.

“This morning, my bite was fast and furious for a bit,” Copenhaver said. “When you have some wind in the morning, you get some bites. When it dies down, it’s painfully slow; like watching paint dry. When you a get a blip of wind, you have to capitalize on it.”

Virginia’s William “Clay” Samples, a member of the U.S. Angler’s Choice Team Trail who paired with Charles “Tyler” Purcell to win the team championship, is in third with a limit that weighed 14 pounds. Adam Dysart of the Chattanooga Bass Association is fourth with four bass weighing 11 pounds, and Anderson of the Kentucky B.A.S.S. Nation is fifth with five bass weighing 10-4.

Purcell, also of U.S. Angler’s Choice team, is sixth after catching one bass that weighed 1-12.
Launch for the final day of the fish-off will begin at 6:45 a.m. ET at Ski Beach Park in Leesburg. Weigh-in is scheduled for 2:45 p.m. at the same location.

The Greater Orlando Sports Commission is hosting the tournament with the assistance of Florida’s Lake County.