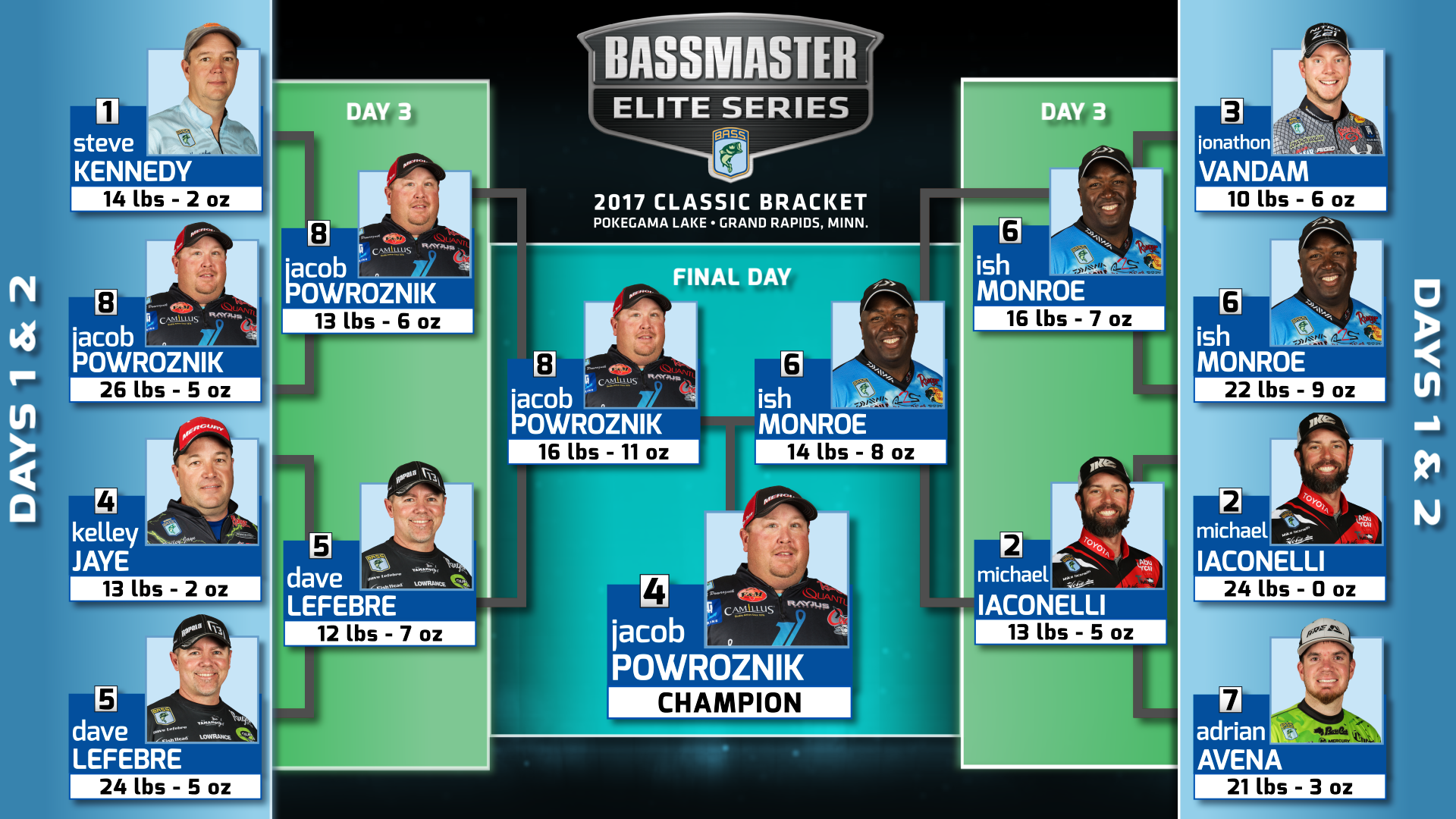 GRAND RAPIDS, Minn. — For the past three years, Jacob Powroznik has qualified for the GEICO Bassmaster Classic presented by DICK’S Sporting Goods by finishing inside the cut in the season-long Toyota Bassmaster Angler of the Year points standings on the Bassmaster Elite Series.

This year, he had to work overtime to get to the Classic.

But he’ll be there just the same.

The Virginia pro caught 16 pounds, 11 ounces of bass Friday — compared to the 14-8 landed by Monroe — to earn the tournament’s automatic Classic berth.

“It’s unbelievable, man,” Powroznik said with tears in his eyes. “It’s just such a relief. It’s the most pressure I’ve ever fished under — and I mean ever.

“To tell you the truth, I don’t ever want to go through that again.”

The Classic Bracket featured the Top 8 finishers in the Toyota Bassmaster Angler of the Year standings who failed to qualify for the Classic. The seeds were: 1. Kennedy, 2. Michael Iaconelli, 3. Jonathon VanDam, 4. Kelley Jaye, 5. Lefebre, 6. Monroe, 7. Adrian Avena and 8. Powroznik.

All 24 hours of the catch-weigh-release event were aired on Bassmaster LIVE online at Bassmaster.com and on ESPN3 — and by Friday, only Monroe and Powroznik remained. As is often the case with competitive bass angling, early-morning decisions were big for both anglers.

Powroznik, who spent much of the earlier rounds fishing boat docks with a spinning reel, switched to a baitcaster and a swimbait and scored early with a 3-4 largemouth on his first cast. He added a 1-2 on his second cast and steadily built a solid five-bass limit of 11-4 before an hour had passed.

He upgraded with a 3-14 largemouth around 10 a.m. and then had one of the strangest occurrences of the Elite Series season when he landed a solid bass with a yellow cull tag clipped in its mouth.

The tag had likely been placed there by an angler in a previous tournament who then somehow failed to remove it when the bass was released.

Monroe’s on-boat judge, B.A.S.S. Nation Director Jon Stewart, originally ruled that the cull tag had to be removed before the fish could be weighed. But Powroznik objected.

Stewart consulted B.A.S.S. Tournament Director Trip Weldon, who advised him to weigh the fish both ways — with the tag and without. The weight in both situations was 3-3.

Once the sun began to break, Powroznik moved away from his largemouth areas and went looking for smallmouth. That’s when he put the tournament away with smallies that weighed 4-3 and 3-0.

“That place I started this morning, I had fished it so many times,” Powroznik said. “I knew they were there because I had been catching every time I went. This morning, I decided I was going to do something different and I started with that swimbait. It was the right move.”

Monroe’s early-morning strategy carried him into a small, picturesque canal that led into a weed-lined pond known as “Little Pokegama.” The decision proved to be a tough one, as Monroe got only two bites in the area — both of which came from northern pike.

He finally caught his first bass — a small 1-3 largemouth — at 8:53 a.m. and followed quickly with a 3-6 at 8:57. But the big bite like the 5-1 smallmouth he landed during the semifinals Thursday never came, and he wasn’t able to catch Powroznik.

Just before the final round ended, Monroe — who has long been known as one of the fiercest competitors in the sport — hooked a fish and lost it, causing him to throw his rod in frustration.

When time ran out, he cranked his outboard and motored back toward the launch in total silence.

The local host for the event was Visit Grand Rapids.