Patrick Walters of Ladson, S.C., took the lead on the second day of the Bass Pro Shops Bassmaster Eastern Open No. 4 held on Douglas Lake, with a two-day total weight of 34 pounds, 13 ounces. 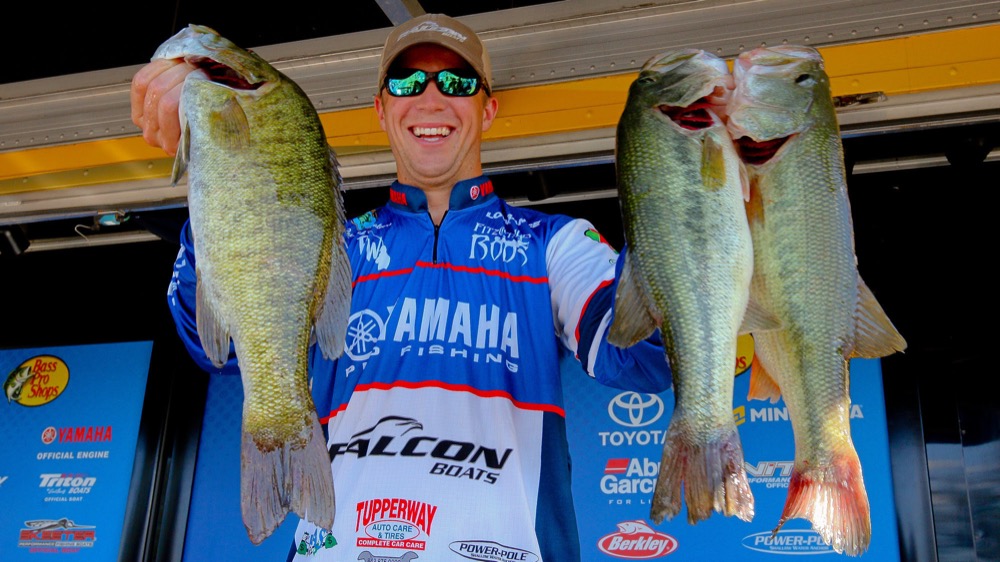 DANDRIDGE, Tenn. — Packing a one-two punch of a bass fishing strategy has South Carolina angler Patrick Walters in the lead going into the final day of the Bass Pro Shops Bassmaster Eastern Open on Douglas Lake.

“I’m catching schooling fish, and when they shut down I can slow down and catch them in the same area,” he said.  “I’m just having fun up there.”

In other words the bass don’t stand a chance. Walters has their number and he dialed into the bass activity even more on Friday.

“They feed sporadically on shallow shoals and then back off,” he said. “There is no way to time when the feeding happens, so it takes staying focused and on the same area all day.”

DeFoe, winner of the 2017 Open on Douglas, is fishing the upper reaches of the French Broad River. Cooler water temperatures and swift current support a healthy, prolific population of smallmouth and largemouth in his area.

DeFoe improved the quality of his catch after catching 15 pounds on Thursday. He credited a key lure adjustment and presentation for the better weight.

“What else helped was the clearer water because that really matters up there,” he said. “Thursday it was just too dirty, and I had to slow my lure presentation much more than normal.”

Fishing slow is almost impossible in the swift current, which sweeps lures past laydowns and rockpiles where bass hide.

“Up there the fishing conditions vary every day due to the fluctuating water and changing clarity,” he continued. “You have to be ready to start all over again, but what makes it so good is the consistency of the bite.”

Cox did what he does best, which is catch bass in extremely shallow water from an aluminum boat. Cox rotated through a crankbait, spinnerbait and jig to catch his limit from the French Broad River.

“It’s a junk fishing pattern, and I’m working every piece of shoreline cover I can, rocks, laydowns, anything that creates a current break for the bass,” he said.

The championship field will include the winners of the four Eastern Opens — including the winner at Douglas Lake — and winners from the four Central Opens and the Top 10 in season point standings from each division.

Walters, who won the Central Open in June, can seal his qualification in the Championship should he win this tournament tomorrow. Going into this event he was also inside the Top 10 of the Eastern Open points, setting up the chance for him to double qualify.

The top pro angler wins a Skeeter ZX200 with trailer and rigged with Yamaha VF200LA. A Minn Kota Fortrex, Lowrance Elite Ti 7 and other factory accessories are included.

The top co-angler wins a Triton 179 TrX powered by a Mercury 115 ELPT, a trailer and standard factory accessories.

The Top 12 boats take off at 7 a.m. ET from Dandridge Dock. The weigh-in begins at 4 p.m. at Bass Pro Shops Outdoor World in Kodak, Tenn.

B.A.S.S. is the worldwide authority on bass fishing and keeper of the culture of the sport, providing cutting edge content on bass fishing whenever, wherever and however bass fishing fans want to use it. Headquartered in Birmingham, Ala., the 500,000-member organization’s fully integrated media platforms include the industry’s leading magazines (Bassmaster and B.A.S.S. Times), website (Bassmaster.com), television show (The Bassmasters on ESPN2), radio show (Bassmaster Radio), social media programs and events. For 50 years, B.A.S.S. has been dedicated to access, conservation and youth fishing.