The biggest bass of Toyota Basssmaster Texas Fest to benefit Texas Parks and Wildlife Department was a 10 pound 5 ounce Lake Travis giant that bit Cliff Pace’s tiny finesse lure while his fellow competitors were still running to their first fishing spot early on Day 1 of the tournament. 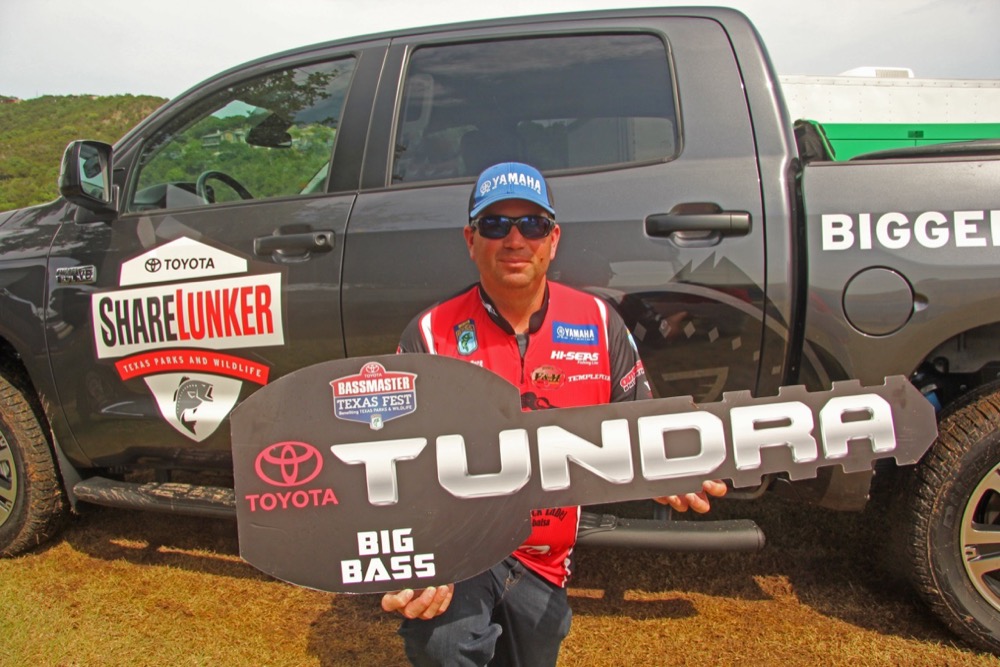 “That fish was a gift. I stopped on that spot on a whim. That fish was meant to be,” Pace told fans from the weigh-in stage.

When asked what the biggest bass he had ever caught in his life was, he explained it was another Texas 10-pounder caught during a Bassmaster Elite on Lake Falcon a few years back.

Texas ten pounders aren’t new to the 2013 Bassmaster Classic Champion from Mississippi, and neither are Toyota Tundras. Pace was actually the very first Elite Series pro to tow with a Tundra long before the truck became the tow vehicle of choice for most Elite Series pros.

“You’ll laugh, but one of the things I loved most about that first Tundra was it had a really long bed, so I could store an 8’ flippin’ stick in there with plenty of room,” says Pace, who is also one of the longest registered members in the Toyota Bonus Bucks contingency program for tournament anglers.

Having plenty of room for storing extra long fishing rods is great, but ultimately, it’s reliability that has lead Pace to purchasing eight Toyota Trucks.

“I don’t have to take them to the shop for repairs. That’s what I like most about owning a Toyota. I put 100,000 miles on my Tundras every two years, and the only thing I have to buy for them is gas, oil, and new tires,” says Pace who is now the proud owner of his 9th Toyota Tundra.

This one not purchased, but very much deserved through great skill and a little luck to lure a 10-pounder to bite his tiny finesse bait.