“I spent the first two days of the tournament running shallow rock piles,” said Johnston, who was also crowned the 2016 Strike King Angler of the Year in the Costa FLW Series Northern Division. “I started on the east end of the lake and worked my way west, hitting about 20 isolated piles along the way.” 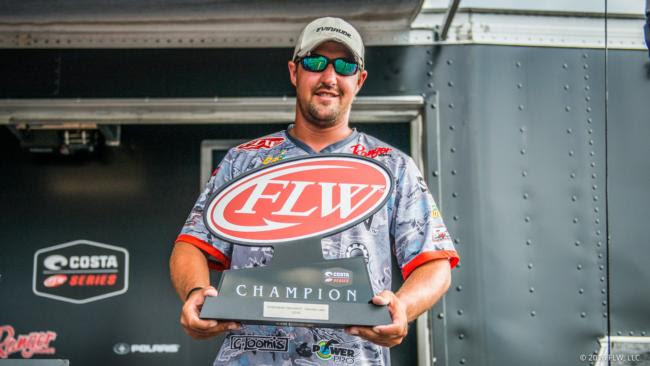 Johnston said he used a bluegill-colored Jackall topwater bait to dissect his piles, but fan-casted a green-pumpkin Strike King Coffee Tube and a 4-inch green-pumpkin Yamamoto Baits Senko when the fish were spooked.

“My day started off kind of slow on Thursday,” said Johnston. “I caught a 3-pounder right off the bat, but had to run around to catch more. Before long, I caught a 4-pound largemouth and then filled out the rest of my limit with some good-sized smallmouth.

“I didn’t have a good fish in the boat until 8 a.m. on Day Two,” continued Johnston. “I caught a key largemouth off of a dock on a Punisher Lures jig, which really helped, and I ended up weighing four smallmouth alongside it.”

“The wind picked up and the water was stained so I couldn’t see the rock piles,” said Johnston. “I concentrated on a weed flat, but returned to some piles when I went shallow. I probably hit 15 to 20 different areas throughout the day.”

The Ontario pro went on to say that it was his largemouth catches that were crucial to his success.

“You don’t get a ton of largemouth here on Oneida, but when you do, they’re big ones,” said Johnston.

The top 10 pros on Oneida Lake were:

Complete results can be found at FLWFishing.com.

Shipton caught a bass weighing 5 pounds even Thursday – the biggest bass of the tournament in the pro division – that earned him the day’s Big Bass award of $216.

Christopher Hall of South Abington Township, Pennsylvania, won the co-angler division and a Ranger Z117 with a 90-horsepower Mercury or Evinrude outboard motor. Hall earned his win with a three-day total catch of 15 bass weighing 46 pounds even.

The top 10 co-anglers on Oneida Lake were:

Miller caught the biggest bass of the tournament in the co-angler division Friday, a bass weighing 4 pounds, 2 ounces that earned him the day’s Big Bass award of $144.

The Costa FLW Series on Oneida Lake presented by Ranger Boats was the third and final stop of 2016 in the Northern Division. The next Costa FLW Series tournament will be a Southwestern Division event, held Sept. 29 – Oct. 1, on Fort Gibson Lake in Wagoner, Oklahoma. For a complete schedule, visit FLWFishing.com.

For complete details and updated information visit FLWFishing.com. For regular updates, photos, tournament news and more, follow the Costa FLW Series on Facebook at Facebook.com/FLWFishing and on Twitter at Twitter.com/FLWFishing.

FLW is the world’s largest tournament-fishing organization, providing anglers of all skill levels the opportunity to compete for millions in prize money in 2016 across five tournament circuits. Headquartered in Benton, Kentucky, with offices in Minneapolis, FLW conducts more than 235 bass-fishing tournaments annually across the United States and sanctions tournaments in Canada, China, Mexico and South Korea. FLW tournament fishing can be seen on the Emmy-nominated “FLW” television show, broadcast to more than 564 million households worldwide, while FLW Bass Fishing magazine delivers cutting-edge tips from top pros. For more information visit FLWFishing.com and follow FLW at Facebook, Twitter, Instagram, YouTube and Snapchat: @FLWFishing.