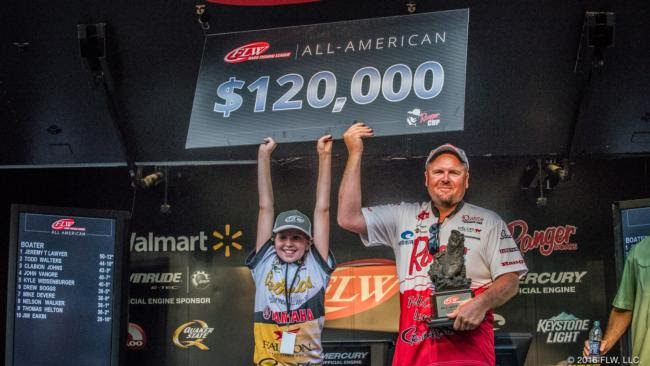 “I’ve fished many BFL events and have never won, so I guess if you’re going to come out on top, this is the event to do it at,” said Lawyer, who qualified for the 2016 Forrest Wood Cup – the world championship of bass fishing – with his win Saturday. “I’ve had so much support from friends and family this week. I’m happy for myself, but I’m also glad I could pull through for everyone that was counting on me. I’m just tickled to death right now.”

“I started out the morning on a bluff in the mouth of the Little River and caught my biggest fish – a 5-pounder – at 8 a.m.,” said Lawyer. “That catch really set the pace for the day. Within an hour or two I boated a keeper around the Highway 68 bridge off of a rocky point. I ran back to the Little River bluff at 11 a.m., and was able to nab two more keepers – a 3- and 4-pounder. At that point I started doing the math to figure out how much weight the other competitors would need to catch me.”

“By 2 p.m., I still didn’t have a fifth keeper,” said Lawyer. “With 12 minutes left to fish, I returned to the bluff end and caught a 4-pounder. I think it was all of the boat traffic that got the area so active. The crawdads were stirred up and the fish were chasing them, and the wake from the boats were pushing the fish up onto the bank to where I could catch them. This was one of those tournaments where everything went my way. I’m going to enjoy this feeling for as long as I can.”

The top 10 boaters finished the tournament:

Complete results can be found at FLWFishing.com.

Wesley Smith of Vinemont, Alabama, won the co-angler division and $50,000 with a three-day total of 11 bass weighing 26 pounds, 4 ounces, followed by Mike Allen of Crystal Springs, Mississippi, in second place with eight bass weighing 25-4, worth $15,000.

Hosted by Cadiz-Trigg County Tourism, the BFL All-American featured the top 49 boaters and top 49 co-anglers from across the 24-division BFL circuit and the TBF National Championship casting for cash prizes of up to $120,000 in the Boater Division and $60,000 in the Co-angler Division, plus an opportunity to compete for the Forrest Wood Cup Aug. 4-7 on Wheeler Lake in Huntsville, Alabama.

The BFL is a 24-division circuit devoted to weekend anglers, with 120 tournaments throughout the season, five in each division. The top 50 boaters and co-anglers from each division qualify for a regional tournament and are competing to finish in the top six, which then qualifies them for one of the longest-running championships in all of competitive bass fishing – the BFL All-American. Top winners in the BFL can move up to the Costa FLW Series or even the Walmart FLW Tour.

Coverage of the 2016 BFL All-American will premiere in high-definition (HD) on NBC Sports Network (NBCSN) Oct. 5 from 1 p.m.-2 p.m. EDT. The Emmy-nominated “FLW” television show airs on NBCSN, the Pursuit Channel and the World Fishing Network and is broadcast to more than 564 million households worldwide, making it the most widely distributed weekly outdoors-sports television show in the world.

For a full schedule of events, complete details and updated information visit FLWFishing.com. For regular updates, photos, tournament news and more, follow FLW on Facebook at Facebook.com/FLWFishing and on Twitter at Twitter.com/FLWFishing.

FLW is the world’s largest tournament-fishing organization, providing anglers of all skill levels the opportunity to compete for millions in prize money in 2016 across five tournament circuits. Headquartered in Benton, Kentucky, with offices in Minneapolis, FLW conducts more than 235 bass-fishing tournaments annually across the United States and sanctions tournaments in Canada, China, Mexico and South Korea. FLW tournament fishing can be seen on the Emmy-nominated “FLW” television show, broadcast to more than 564 million households worldwide, while FLW Bass Fishing magazine delivers cutting-edge tips from top pros. For more information visit FLWFishing.com and follow FLW at Facebook, Twitter, Instagram, YouTube and Periscope: @FLWFishing.