ROGERS, Ark. (April 29, 2017) – The weather was the big story Saturday at the FLW Tour event at Beaver Lake presented by General Tire. After a rainy week that had seen water levels rise more than 8 feet, Mother Nature continued to challenge the FLW Tour pros with another round of heavy storms and flash flooding that forced many of the final 20 Tour pros to seek shelter during the competition day. 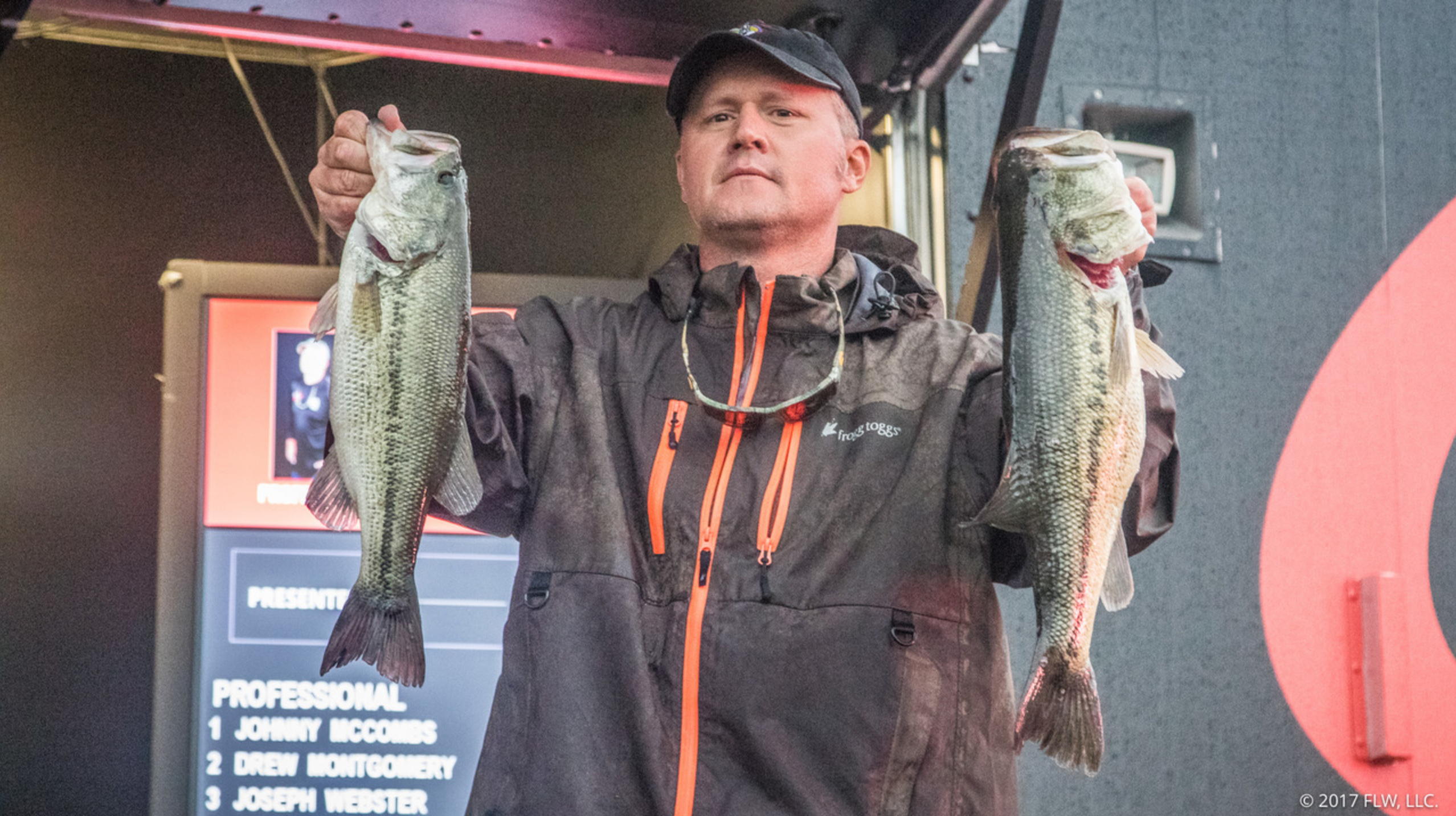 After starting the day in 11th place, pro Johnny McCombs of Morris, Alabama, battled through the storms and brought a five-bass limit to the scale weighing 18 pounds, 15 ounces – the heaviest limit of the tournament and seventh largest at Beaver Lake in FLW Tour history – to vault to the top of the leaderboard. The four-day competition, hosted by Visit Rogers, featured a field of 161 of the world’s best bass-fishing professionals casting for a top award of up to $125,000.

“I think the weather affected the fishermen more than the fish,” said McCombs, a three-time Forrest Wood Cup qualifier. “I fished all new water today and had my weight by 8:30 a.m. It wasn’t one spot – it was one here, one there. I caught them all on one bait.”

With one day of competition remaining, McCombs was not yet ready to divulge the specifics of his bait.

“The water is flooded into the bushes, and I’m just fishing down the bank line,” McCombs said. “I’m on a pattern and I know what to look for. If I pull into a place and it doesn’t look right, I’m out of there and on to the next one.

“I actually stopped fishing a few hours early today because of the storms,” McCombs continued. “I’m excited to get back out there tomorrow and hopefully I can get the right bites that I need to win this thing.”

The top 10 advancing to the final day of competition Sunday on Beaver Lake are:

Finishing in 11th through 20th are:

Overall there were 90 bass weighing 172 pounds even caught by pros Saturday. Fourteen of the final 20 pros weighed in five-bass limits.

In FLW Tour competition, pros and co-anglers are randomly paired each day, with pros supplying the boat, controlling boat movement and competing against other pros. Co-anglers fish from the back deck against other co-anglers. The full field of 322 anglers competed Thursday and Friday. Co-angler competition concluded following Friday’s weigh-in, while the top 20 pros based on their two-day accumulated weight advance to Saturday. Only the top 10 pros continue competition Sunday, with the winner determined by the heaviest accumulated weight from the four days of competition.

Prior to the weigh-in Sunday, FLW will host a free Fishing Expo at Prairie Creek Park from noon to 4 p.m. The Expo is a chance for fishing fans to meet their favorite anglers, enjoy interactive games, activities and giveaways provided by FLW sponsors, and learn more about the sport of fishing and other outdoor activities.

Television coverage of the FLW Tour at Beaver Lake presented by General Tire will premiere in high-definition (HD) on NBC Sports Network (NBCSN) June 18 from 6 a.m.-7 a.m. EDT. The Emmy-nominated “FLW” television show airs on NBCSN, the Pursuit Channel and the World Fishing Network and is broadcast to more than 564 million households worldwide, making it the most widely distributed weekly outdoors-sports television show in the world.

The FLW Tour has visited Beaver Lake 18 times previously, with 2017 marking the 19th visit in FLW’s 22-year history. The total purse for the FLW Tour at the Beaver Lake presented by General Tire is more than $800,000, including $10,000 through 50th place in the Pro Division. The tournament is hosted by Visit Rogers.

FLW is the world’s largest tournament-fishing organization, providing anglers of all skill levels the opportunity to compete for millions in prize money in 2017 across five tournament circuits. Headquartered in Benton, Kentucky, with offices in Minneapolis, FLW conducts more than 274 bass-fishing tournaments annually across the United States and sanctions tournaments in Canada, China, Mexico, South Africa and South Korea. FLW tournament fishing can be seen on the Emmy-nominated “FLW” television show, broadcast to more than 564 million households worldwide, while FLW Bass Fishing magazine delivers cutting-edge tips from top pros. For more information visit FLWFishing.com and follow FLW at Facebook, Twitter, Instagram, YouTube and Snapchat.