BRANSON, Mo. — There is just no place like home for Bassmaster Elite Series pro Mike McClelland. 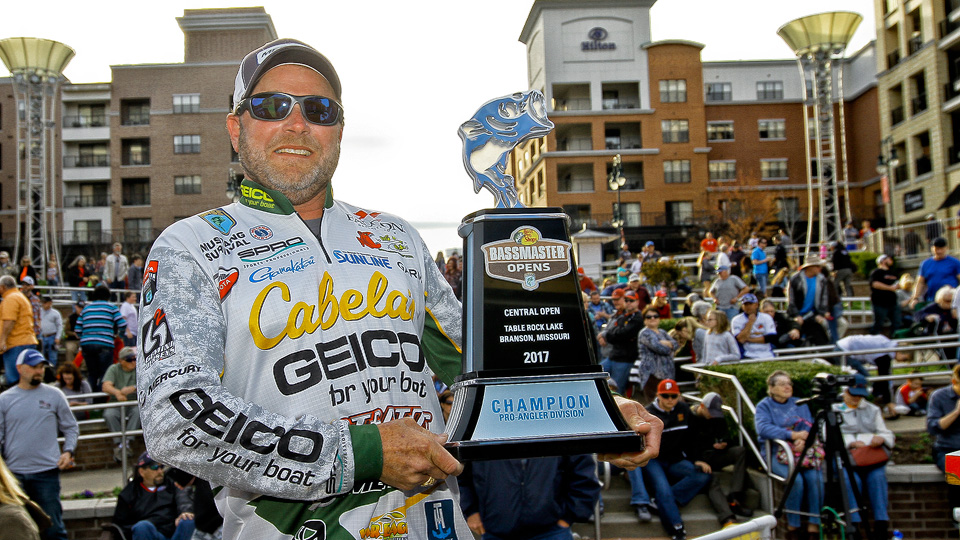 Although he resides in Bella Vista, Ark., McClelland could consider Table Rock Lake his home waters since he spent so much time fishing there as a kid while staying at his grandparents’ property near the lake. He relied on his extensive experience on Table Rock to win the Bass Pro Shops Bassmaster Central Open today, with a three-day total weight of 44 pounds, 4 ounces.

The win was his second B.A.S.S. victory on Table Rock, which earned him the top prize of a Triton 19XP/Mercury 200 Pro XS rig valued at $45,000, along with $8,491 in cash and a berth in the 2018 GEICO Bassmaster Classic presented by DICK’S Sporting Goods if he fishes the remaining two Opens. The Arkansas pro also won the 2014 Bassmaster Elite event at Table Rock.

The first two days McClelland had success keeping his boat in 45 to 50 feet of water and throwing a Cabela’s 3.4 Finesse Swimmer swimbait with a 1/4-ounce underspin jighead to bass holding in standing timber 25- to 32-feet deep. McClelland credited his Garmin Panoptix electronics for helping him see the bass he was catching from the trees. He also caught some shallower fish on a Spro McStick stickbait and a Spro Rock Crawler crankbait.

“The wind killed me (today),” McClelland said. “It was gusting straight down the stretch I was fishing, and I never could get a good angle to fish the trees I was keying on. The Panoptix had allowed me to back off the trees and see exactly where the trees were. I could watch my bait come over the tops of the trees where the fish were coming up. But when I had all that wind and all that turbulence, I couldn’t stay steady enough to know where to throw.”

Largemouth bass made up the bulk of his catch the first two days, but he caught only spotted bass today. He finally abandoned his deep fish in the afternoon and switched to the McStick stickbait to complete his limit weighing 13-5.

After a tough first day, Bassmaster Elite Series pro Josh Bertrand put together two solid days to finish second in the pro division with 43-1. The Gilbert, Ariz., angler weighed in only four bass the first day, but he bounced back with 18- and 17-pound limits respectively the next two days. Yesterday, he found all of his bass relating to two pods of shad.

“Today we went out looking for shad,” he said. “They were in different areas, but we found two more groups and had two really good flurries.”

Bertrand said he caught bass in deep water (down to 30 feet) vertical fishing with a Berkley Gulp Minnow on a drop shot rig. He also caught bass about 10 feet deep on a Berkley 4-inch Beat Shad swimbait with a 1/4-ounce jighead and another thicker bodied swimbait on a 3/8-ounce jighead.