Matt Lee: Misplaced Wallet and a Lot of Caffeine

Carhartt angler Matt Lee began the first day of the Academy Sports + Outdoors Bassmaster Elite at Grand Lake with scrambled eggs, low carb wheat toast, and black coffee in his 5th wheel RV, but soon realized on the dark drive to the Wolf Creek launch that he had misplaced his wallet, and had no way to stop at a convenient store for a bag of ice and the day’s supply of caffeine drinks. 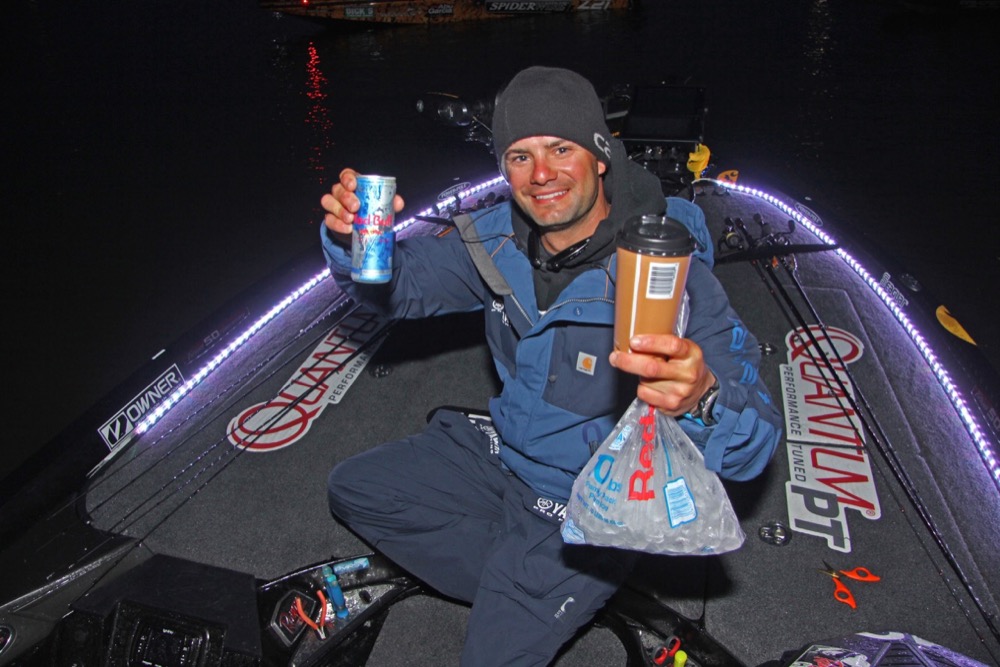 “Matt can’t find his wallet, we think it fell out of the grocery bag as we left the camper, and now we’re stuck in the boat launch line. So can we beg you to stop and buy us a black coffee, two sugar free Red Bulls, a bag of ice, and a honey bun with icing?”

Of course, I obliged. First, because we take care of one another out here. And second, because I know Matt is a Type 1 diabetic who wears an insulin pump, and needs the proper blend of dietary fuel to make his body meet the demands of an energy-burning tournament day.

Turns out the Honey Bun with icing was for Abby, but the caffeine was definitely for Matt. And ironically, Matt’s ride-along Marshall for the day is Susan Forbes, a dietician from nearby Neosho, MO hoping to garner some pointers for the Grand Challenge tournament she’s competing in next week.

“He’s got a lot of quick energy and refined carbs, but not much fiber, so I don’t think we’ll have to worry about him having to use the restroom,” grinned Forbes.

That’s good news. And so is the fact that Abby found Matt’s wallet upon returning to the RV after launch, as Matt made his way down lake to Duck Creek.

“I didn’t have a real good practice, so I’m going to the one area where I feel like I can slow down, fish thoroughly, and catch some keepers,” says Lee.

Hopefully, the Auburn grad with dual engineering degrees can continue his streak of Top 12 finishes this week. And one thing’s for certain, Abby will be waiting on the dock as he pulls into weigh-in, just as she does during every tournament day, with a sandwich he can eat immediately – and today, a once temporarily misplaced wallet too.