PLATTSBURGH, N.Y. (June 24, 2016) – Pro Scott Martin of Clewiston, Florida, weighed a five-bass limit totaling 20 pounds even to extend his lead after Day Two of the Walmart FLW Tour at Lake Champlain presented by General Tire. Martin will bring a 3-pound, 9-ounce advantage into Day Three of the four-day competition that features 160 of the top bass-fishing anglers in the world competing for a top cash award of up to $125,000.

In second place is Bryan Schmitt of Deale, Maryland, who weighed in a five-bass limit totaling 21-5 Friday – the largest of the day – for a two-day cumulative total of 10 bass worth 38-12. The field is trimmed to the top 20 on Saturday, with only the top 10 anglers fishing on final day Sunday. 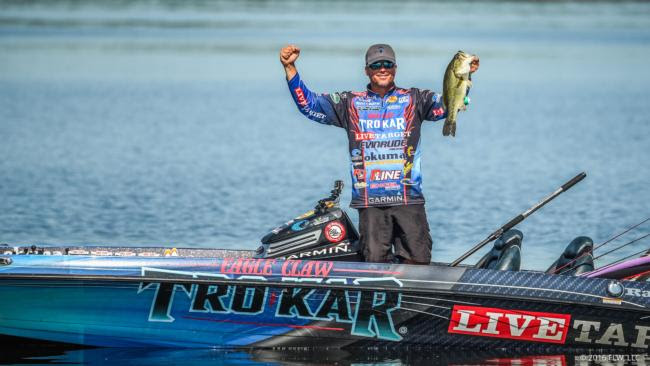 “This lake has been has been special to me,” said Martin, who has earned more than $2.39 million in FLW competition. “The first time I won in 2004, I did it with all spawning fish. The second time around in 2009, it was all largemouth. This time, I’ve got a mixture of both which I’m excited about.”

Martin said he returned to his area from Day One – an offshore location in the northern end of Lake Champlain that he refers to as ‘the reef’. He said he is rotating between four different baits, but withheld any specifics about their presentations.

“I only caught one good largemouth from the reef today,” said Martin. “I moved around and caught another decent one, but they’re not out there like they were yesterday. I know some little sweet spots here and there that I can milk. That’s my strength out there right now.”

In addition to the two largemouths, Martin said he rounded out his limit with three smallmouths.

“Thanks to the slick conditions, I was able to sight-fish for the smallmouths,” said Martin. “I had to run about 15 minutes for them, but I also had some other spots that I wasn’t able to check. If the weather is nice tomorrow, I’m going to go there again and see what is left.”

“For me, it’s all about confidence in your strengths,” said Martin. “I like to sight-fish, and I like to target largemouth in open water. With those two at my disposal, I have a lot of confidence in this lake.”

The top 20 pros that made the Buck Knives Cut and will fish Saturday on Lake Champlain are:

Schmitt weighed in a 5-pound, 8-ounce largemouth to win the Big Bass Award on the pro side Friday and the $500 prize.

Al Gagliarducci of West Suffield, Connecticut, won the co-angler division and $20,000 Friday with a two-day total of 10 bass weighing 33 pounds, 11 ounces, followed by David Hudson of Jasper, Alabama, who finished in second place with 10 bass weighing 31 pounds, 13 ounces worth $7,600.

Jeff Jones of West Seneca, New York, earned the Big Bass Award on the co-angler side Friday with a bass weighing 6 pounds, 9 ounces to win the $250 prize.

Anglers were also vying for the prestigious 2016 Walmart FLW Tour Angler of the Year title that is determined by the most points accumulated over the six regular-season Tour events in 2016.

Adding another accolade to his illustrious career, Livingston Lures pro Andy Morgan of Dayton, Tennessee, clinched his third Angler of the Year title Friday. Morgan made the top-20 cut in 10th place, guaranteeing him the season-long cumulative points title. Morgan became the third angler in FLW Tour history to win the title three times, earning him a check for $100,000 and an automatic berth into the 2017 Forrest Wood Cup.

Pro Chris Johnston of Peterborough, Ontario, Canada, clinched the 2016 Walmart FLW Tour Rookie of the Year award, which is awarded to the rookie pro angler who finishes the season with the highest point total.

Anglers will take off from the Plattsburgh City Marina located at 5 Dock St. in Plattsburgh at 6:30 a.m. EDT each day of competition. Saturday and Sunday’s final weigh-ins will be held at the Crete Memorial Civic Center, located at 4 Beach Road beginning at 4 p.m.

Fans will also be treated to the FLW Expo Saturday and Sunday from noon to 4 p.m. at the Civic Center before the final weigh-ins. The Expo includes a 100-yard Lew’s Casting Lane, the opportunity to interact with professional anglers, enjoy interactive games, activities and giveaways provided by FLW sponsors, and learn more about the sport of fishing and other outdoor activities. All activities are free and open to the public.

As part of the FLW Tour’s community outreach initiative, the FLW Foundation’s Unified Youth Fishing Derby will be held at the Wilcox Dock located at 90 Cumberland Ave., in Plattsburgh Saturday, June 25, from 9:30-11:30 a.m. The event is hosted by FLW Foundation pro Cody Kelley along with other FLW Tour anglers, and is free and open to area youth 18 years of age and younger and Special Olympics athletes. Event goodie bags will be awarded to the first 50 participants who sign up. Rods and reels are available for use, but youth are encouraged to bring their own if they own one. All bait is donated by the DMF Bait Company.

Coverage of the Lake Champlain tournament will premiere in high-definition (HD) on NBC Sports Network (NBCSN) Oct. 12 from 1 p.m.-2 p.m. EDT. The Emmy-nominated “FLW” television show airs on NBCSN, the Pursuit Channel and the World Fishing Network and is broadcast to more than 564 million households worldwide, making it the most widely distributed weekly outdoors-sports television show in the world.

The Walmart FLW Tour at Lake Champlain presented by General Tire is hosted by the City of Plattsburgh and the Adirondack Coast Visitors Bureau.

FLW is the world’s largest tournament-fishing organization, providing anglers of all skill levels the opportunity to compete for millions in prize money in 2016 across five tournament circuits. Headquartered in Benton, Kentucky, with offices in Minneapolis, FLW conducts more than 235 bass-fishing tournaments annually across the United States and sanctions tournaments in Canada, China, Mexico and South Korea. FLW tournament fishing can be seen on the Emmy-nominated “FLW” television show, broadcast to more than 564 million households worldwide, while FLW Bass Fishing magazine delivers cutting-edge tips from top pros. For more information visit FLWFishing.com and follow FLW at Facebook, Twitter, Instagram, YouTube and Periscope: @FLWFishing.