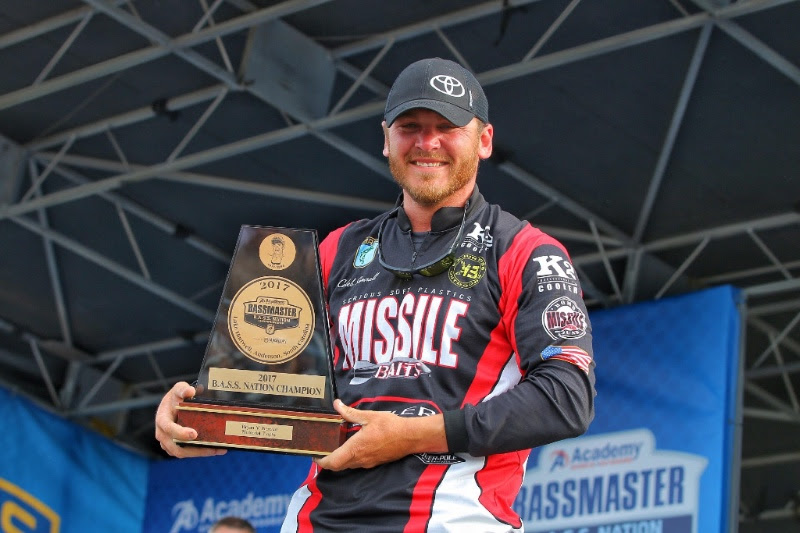 An unproductive practice in shallow water forced Sumrall to expand his search to the lower, deeper end of the massive 56,000-acre lake. The cloud pattern miraculously came together during Thursday’s opening round.

“A patch of clouds came over, and I recalled a tip from a friend about casting a (Zoom) Fluke into schooling fish under those conditions,” recalled Sumrall, 30, and a member of the Atchafalaya Bassmasters.

The friend was fellow Louisianan Jamie Laiche, who discovered the pattern while fishing the 2008 Bassmaster Classic. Sumrall had such a rig on his front deck. On consecutive casts he caught keepers to give him confidence that a game plan was coming together.

On Thursday, he weighed 11-5 and entered the standings in ninth place. Early the next morning he returned to the spot. The low-light conditions were ideal for stimulating the schooling fish to bite the soft jerkbait. After a flurry of activity a limit was in his livewell, including a largemouth weighing 5-15.

“The big difference was my schooling fish were very concentrated in numbers,” he explained. “Elsewhere the schools were smaller and more loose.”

Sumrall described the key area as a main lake shoal in 11 feet of water. Growing within 4 feet of the surface was a patch of hydrilla.

“I’m a Louisiana boy and that made the spot even sweeter for me.”

The key bait was a Zoom Super Fluke. He rigged that to a 1/4-ounce weighted Gamakatsu Superline EWG Weighted Hook. Gluing a plastic rattle inside the hollow body added strike appeal.

By midmorning the schooling fish settled down. A drop-shot rig coaxed slow biters to fill his limit.

Sumrall weighed 15-10 on Friday and finished the tournament with a limit weighing 9-13.

Runner-up Luke Gritter alternated between the river and main lake. The double effort produced a final weight of 34-8

“I fished the river for the bigger largemouth and filled out my limit with the spotted bass in the lower lake,” explained Gritter, a carpenter from Otsego, Mich., and member of the West Michigan Elite Bass Club.

Gritter fished a brown 3/8-ounce leadhead jig and 3/8-ounce spinnerbait along shoreline woody cover in the river. In the lake, he chose a drop-shot rig made with a 6-inch Roboworm, 4/0 hook and 1/4-ounce weight. A Lucky Craft Sammy produced strikes during the topwater bite.

“I tried it but just don’t have the patience,” said Giddens, a plumbing and home contractor from Eclectic, Ala.

Instead, Giddens focused on boat docks on a five-mile stretch of the lake.

“I skipped a plastic worm to probably every dock, just ‘grinded’ it out,” he said.

Sumrall, Gritter and Giddens advance to the 2018 GEICO Bassmaster Classic presented by DICK’S Sporting Goods. The Classic is March 16-18 on Lake Hartwell.

Sumrall also received the Bryan V Kerchal Memorial Trophy. A Skeeter ZX200 rigged with Yamaha SHO 200 outboard, Minn Kota trolling motor and Lowrance electronics is part of the prize package. A berth in the 2018 Bassmaster Elite Series is also reserved for Sumrall. He receives $16,000 for entry fees by accepting the invitation.

The Top 3 anglers earned paid entry fees in the division of their choosing for the Bass Pro Shops Bassmaster Opens, and for year the use of a B.A.S.S. Nation’s Best package. That is a Phoenix Boat with standard factory accessories.

Gritter won a Skeeter TZX190 and Yamaha SHO 150, rigged with the same accessories as the winner’s boat as runner up.

The championship is truly the only global bass club competition of its kind. Joining anglers from 47 states were those from five continents. Mexico, Japan, Australia, Portugal, Italy, Zimbabwe, Namibia, the province of Ontario and the Republic of South Africa were the nations represented in the championship.