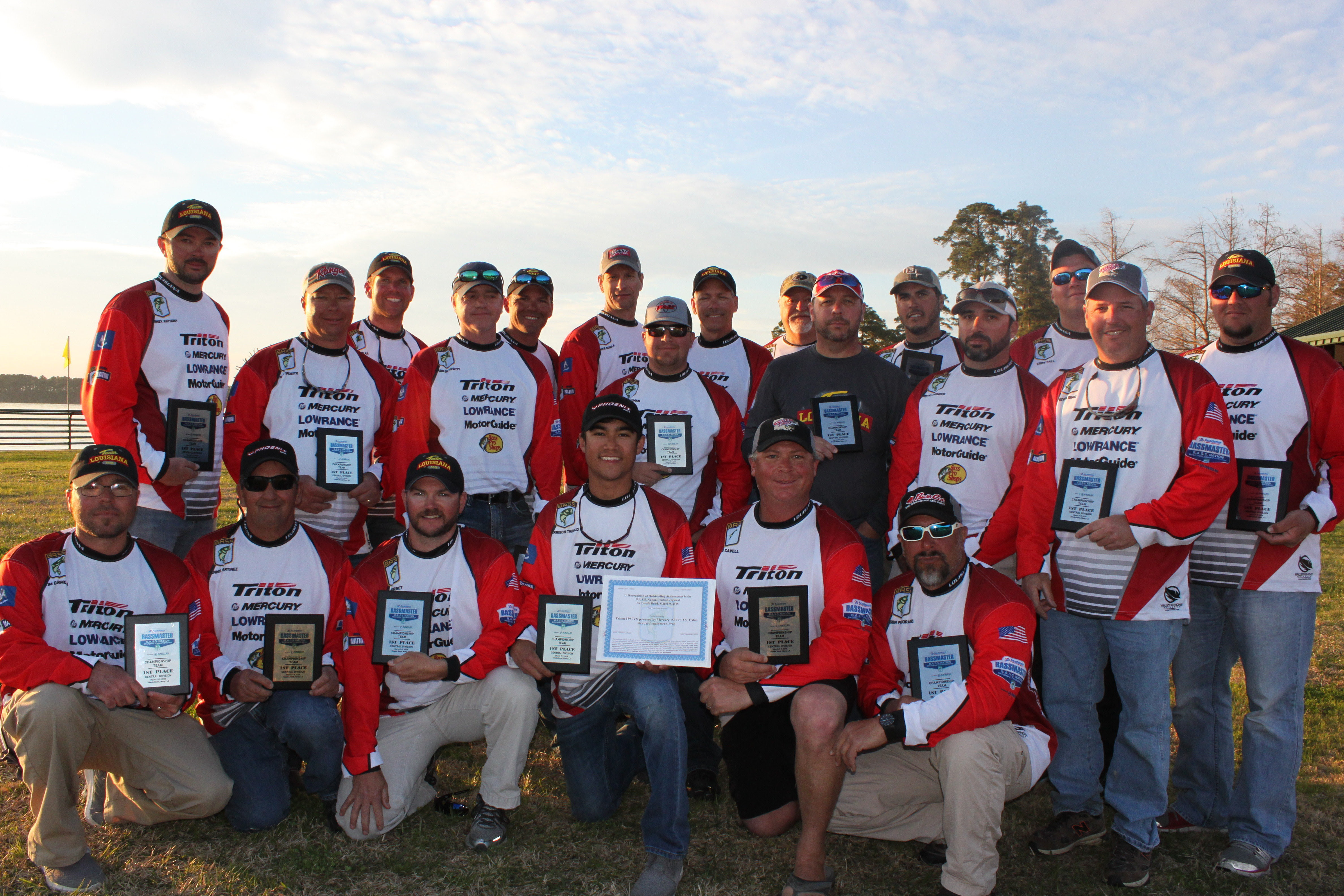 The Bayou State squad, which is composed of 10 boaters and 10 nonboaters, caught 135 bass over two days for a cumulative weight of 379 pounds, 2 ounces. That was more than 11 pounds heavier than Team Arkansas, which actually caught more weight than Louisiana today, but finished second overall with 135 bass for 367-13.

Making the victory event sweeter for the home team is that the team championship came on Toledo Bend Reservoir — one of the most hallowed bass fisheries in the U.S. The majority of Team Louisiana’s anglers hail from south Louisiana, however, so while they are familiar with Toledo Bend, they don’t fish it every day like they do the bass fisheries south of Interstate 10.

“To come here and compete with the competition that was here this week in this event is a feat,” said Louisiana B.A.S.S. Nation President Kevin Gaubert, who fished as a nonboater in the regional.

“When you get to this level, it’s all the top anglers in your state. You come here and do your best, put your time in and hope everything works out in your favor. It did today. I think this is our fifth or six team win in B.A.S.S. Nation.”

The team won a Triton/Mercury boat/motor package valued at $40,000 with the win. Gaubert said a Nation member is interested in purchasing it, and the money they gain will go to good use in helping stage tournaments throughout the state.

Next up is the individual competition in the Central Regional. Nine Louisiana anglers will move to the next round, which includes the top three boaters and nonboaters from each state, as well as the leading 38 anglers on the money line.

In all, 62 boats with 124 anglers will fish Friday for individual state honors, cash prizes and a chance to represent their team in the B.A.S.S. Nation Championship to be held later this year on an undisclosed date and fishery.

“This means a lot,” Cavell said. “You have two or three of us who are right on top of each other. If you lose a fish, you can get trumped by the other guy. This lake can make you or break you. You get a sizable bass, like a 10- or 11-pounder, and that changes everything.”

Others representing Team Louisiana in the boater division include fellow Prairieville resident Jamie Laiche, 15th with 30-6, and Jeremy Anthony of Loranger, 26th with 28-14.

Charlie Hewitt, yet another Prairieville resident, leads the overall nonboater field with a two-day total of six bass weighing 26-7. Hewitt was disappointed on Thursday after catching three bass that weighed 8-6. That bag followed his incredible haul of 18-1 on Wednesday.

Still, he’s happy to be fishing for individual honors on Friday after helping his team to a championship.

“I went to the same area today I did on Wednesday, and I struggled,” Hewitt said. “I was scared about getting knocked out of first place. But it’s worked out so far — I’m at the mercy of my boater tomorrow, but I’d really like to be around grass. That’s key to my bite.”

Nobile is also in the lead for the big bass award of $250 on the nonboater side with an 8-15 he caught Wednesday.

Bob Blumenstein of the Illinois B.A.S.S. Nation leads the boater field with a two-day haul of 10 bass weighing 42-11. The Bolingbrook resident caught the heaviest limit of the tournament so far with a 25-13 sack today.

“I was fortunate enough to find a spot, but I couldn’t get to it yesterday with the wind,” he said. “If I can get there tomorrow like I was able to today, it could be interesting.”

Blumenstein said averaging 5 pounds per bass was an incredible experience.

“I’m not used to catching fish like that,” he said. “You think ‘Toledo Bend’ and ‘I’m going to go down there and whack ‘em.’ Well, today I whacked them, and it felt good.”

Team Indiana boater Chris Myers whacked the bass, too, today, as evidenced by the 11-6 lunker he weighed to the roar of the crowd — it is in the lead for the $500 big bass award.  It was the heaviest bass in his 37 years of bass fishing and his 23-5 limit also was the heaviest he’s caught. He led Team Indiana in the standings and is in 10th place with 32-4.

“This was the day of a lifetime,” Myers said.

The third and final day of the Academy Sports + Outdoors B.A.S.S. Nation Central Regional presented by Magellan Outdoors will begin at 6:15 a.m. CT. Weigh-in is scheduled to begin at 2:30 p.m. at Cypress Bend Park.

The final weigh-in can be seen live on Bassmaster.com.