Lizards vs. Creatures. Scroggins Explains Which to Cast When.

Team Toyota’s Gerald Swindle posted video on his social media pages of a large alligator on the shoreline during Monday’s practice round, as did likeable California pro Chris Zaldain.

Furthermore, Swindle’s buddy and Florida Gator fan Terry “Big Show” Scroggins says he won’t leave the dock during this time of year without creatures and lizards in his boat.

Of course, Scroggins is referring to the soft plastic fishing lure variety that are proven to work wonderfully in mid-Spring, but the question is when to thread a plastic lizard on your hook, versus the equally popular and similarly-shaped ‘creature’ bait like a Brush Hog, Rage Hawg or Hawk Hawg. 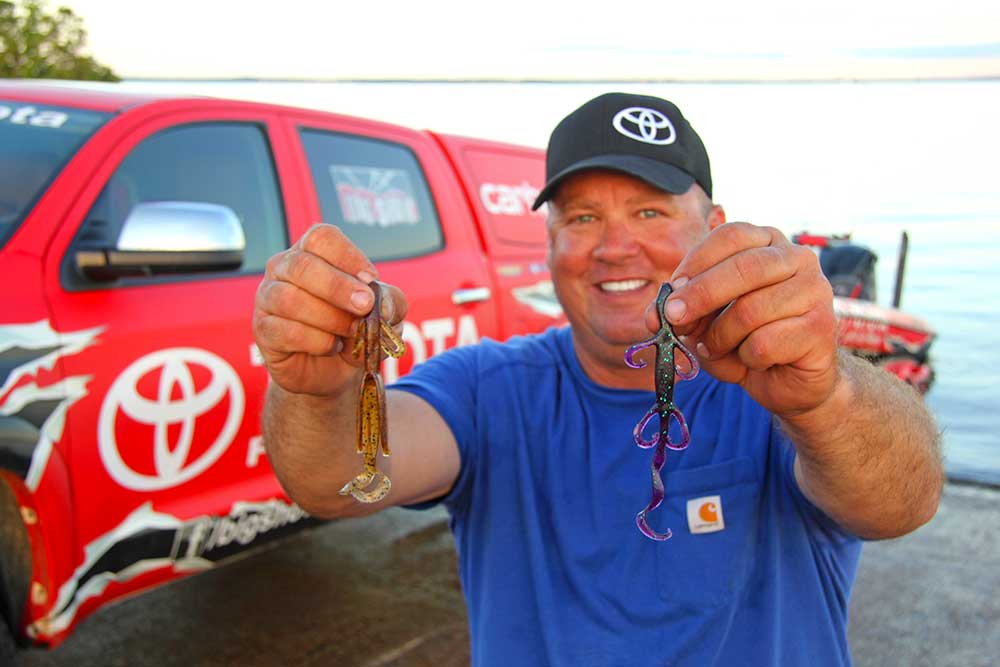 “Lizards and creature baits are both hard to beat at this time of year, and they can be pretty interchangeable, but I differ a little bit as to what situations to use each of them in,” says Scroggins.

“I mainly use creature baits when I’m pitching to heavy cover like flooded bushes that are common this time of year as a result of spring rainstorms, or if I’m punching through thick vegetation,” says Scroggins. “But I choose a lizard for just about everything else.”

By ‘everything else’ Scroggins is referring to Carolina Rigs, sight fishing for spawning bass, and swimming lizards over vegetation on a light 1/8-ounce Texas rig.

“The tail of a lizard will often get wrapped around little tree limbs and stuff when you’re pitching flooded cover, but a creature bait is a little more streamlined to help you avoid that issue,” he explains.

“If I’m puching a creature bait through heavy vegetation, I’ll Texas rig it with a weight as heavy as  1 ½ ounces. But most of the time, when I’m pitching to wood or around docks, I’ll Texas rig with a 5/16 or 3/8-ounce weight on 25-pound line,” says Scroggins.

You Don’t Need Many Colors

When asked to choose two colors of each lure configuration for the rest of his life, Scroggins didn’t hesitate. “For lizards, I always carry junebug and green pumpkin, and for creature baits, I’m picking black/blue fleck, and again, green pumpkin.”

While he may not carry a wide variety of colors – one thing’s for certain, Scroggins will never launch without lizards and creature baits in his boat at this time of year – including this week at Ross Barnett – where reptiles are a popular sight.