Lester Cashes In Again with Leer

Brandon Lester might want to move to New York each summer. Not only is the weather far less suppressive than late summer tends to be near his home on the Tennessee- Alabama border, but Top 12 Bassmaster Elite Series finishes, and subsequent “Cover Cash” bonus checks from Leer truck caps and tonneau covers are also becoming the norm for Lester in New York-based tournaments each August. 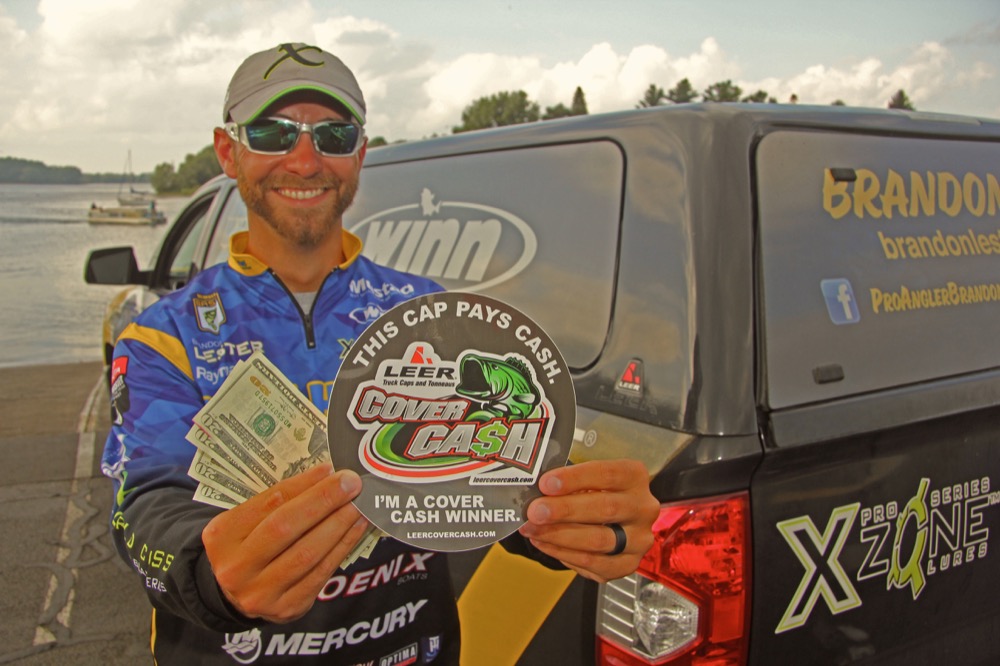 The Toyota driving pro took home Leer “Cover Cash” last summer after a top finish on Lake Champlain at Plattsburgh, NY, and again this past week when he nearly won on the St. Lawrence River at Waddington, NY on the strength of a 6 pound 8 ounce bronze bomber that was his first keeper smallmouth on Championship Sunday.

Sadly, that 6.8-pounder was smaller than an even bigger potentially game-changing behemoth that Lester was unable to land Sunday, which may have been the tournament winning fish. He battled both beasts with a 6’ 9” MHX rod from his title sponsor Mud Hole Custom Rods, while fishing in 25 to 40’ of water.

Obviously, Lester would have loved to win the Elite Series tournament, but the great thing about participating in Leer’s “Cover Cash” program is you don’t have to claim victory to get paid. You simply have to be the highest finishing registered participant in any number of “Cover Cash” affiliated amateur and pro tournament trails.

“I keep everything from my boat cover, to spare fishing tackle, plus extension cords and outboard oil in my Leer, and it’s been trouble-free, dry, and secure for several seasons on tour,” says Lester.

Leer’s “Cover Cash” program pays cash bonuses to registered Leer anglers in Bassmaster Opens, FLW, BFL, A.B.A, as well as numerous top regional bass fishing teams trails, and several walleye fishing trails too. To make sure you’re registered, check out https:/leercovercash.com or phone (918) 742-6424, and ask for Kendell or Jarrett, and they’ll be happy to help you get signed-up.