Lee Brothers Choose One Treat Each for Tricking Halloween Largemouth 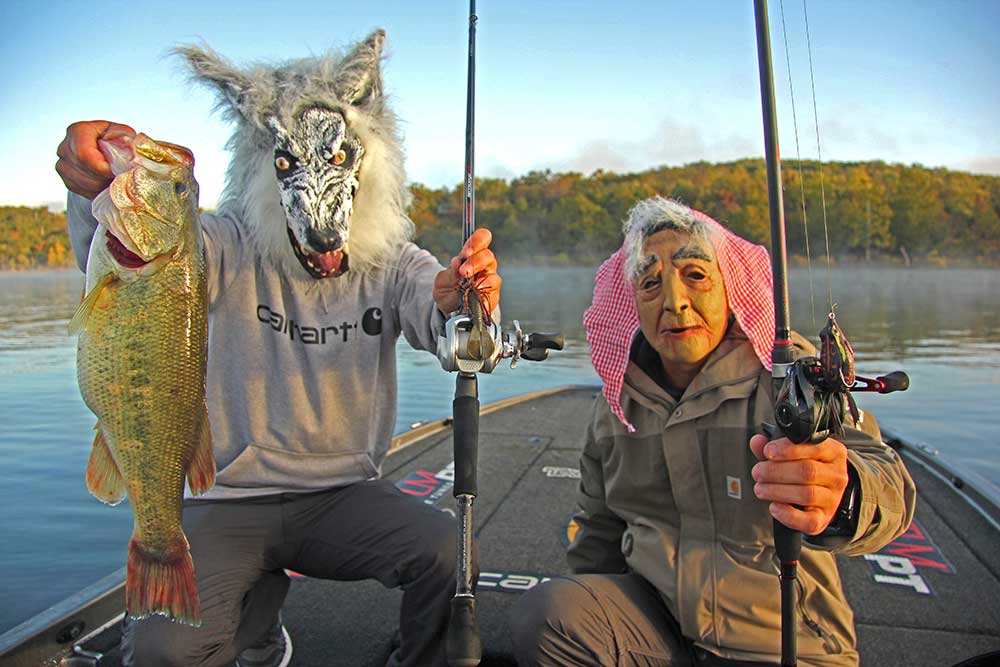 “I had a plaid button-up shirt and carried a guitar around all night – mostly because chicks were into Brad Paisley at the time, and I cold grow a goatee in four days,” laughed Matt, as he reflected back to his campus days.

Speed ahead half-a-dozen years, and Lee is now a full-time Bassmaster Elite Series pro, fresh off five very impressive Top 12 finishes during the 2017 season. And this Halloween, he’s costuming as an old lady, and choosing a topwater frog as his single favorite lure for late October.

“People think of a frog as being a lure for aquatic vegetation, and it’s definitely great for that, but it’s also an awesome bait to throw around isolated laydowns and docks — especially if you’ve got shade present,” says Matt.

Don’t Be Afraid of Braid – “For whatever reason, a lot of beginning anglers are afraid to throw braided line. But with a frog, braid is a ‘must-have’ for better hooksets, and to land the fish that blow up on it,” says Matt. He favors 50 or 65 pound Seaguar Smackdown, and spools it to a Quantum Speed Freak reel with a blazing 8.1:1 gear ratio that’s crucial to picking up line really fast following topwater explosions.

A jig around docks for Jordan — Matt’s younger brother, and Bassmaster Classic Champion, Jordan jumps on a jig for his pick of one lure he can count on in mid-autumn.

“I’m looking to pitch at any isolated piece of wood on the shoreline, but docks are also super key in late October, and it’s hard to beat a 3/8 ounce Strike King finesse jig for laydowns or docks,” says Jordan.

“Yep, the best docks are kinda crusty, and covered in spider webs, with an old aluminum boat parked in the middle of ‘em,” grins the younger Lee brother. “Ideally I like a dock with about 15-feet of water on the front posts, and 5-feet of water near the back of it.”

Jordan trims his jig with a Strike King Menace and spools up with 15-pound Seaguar fluorocarbon, but cautions anglers to not go too big with their rod selection.

“I like a 7-footer versus a 7’ 6” or a 7’ 10” when I’m fishing docks, because a lot of times you’re in tight spaces, plus you make more accurate pitches with a slightly shorter rod,” he explains.  Jordan’s current dock fishing pitchin’ stick of choice is the new Quantum Smoke S3 model #SMC707XF.

Given their phenomenal success during their short tenure as full-time pros, perhaps avid angler and country music star Brad Paisley might consider dressing as one of the Lee Brothers this Halloween – and if he’s wise – he’ll tie on a frog and a finesse jig.