GILBERTSVILLE, Ky. (May 19, 2018) – Pro Jason Lambert of Michie, Tennessee, caught a five-bass limit Saturday weighing 30 pounds, 8 ounces – surpassing the record that he already owned for the largest single-day limit ever caught on Kentucky Lake in FLW Tour competition– to catapult into the lead at the FLW Tour at Kentucky Lake presented by Costa Sunglasses. Lambert will bring a commanding 19-pound, 3-ounce lead into Championship Sunday, where the final 10 pros will compete for up to $125,000. 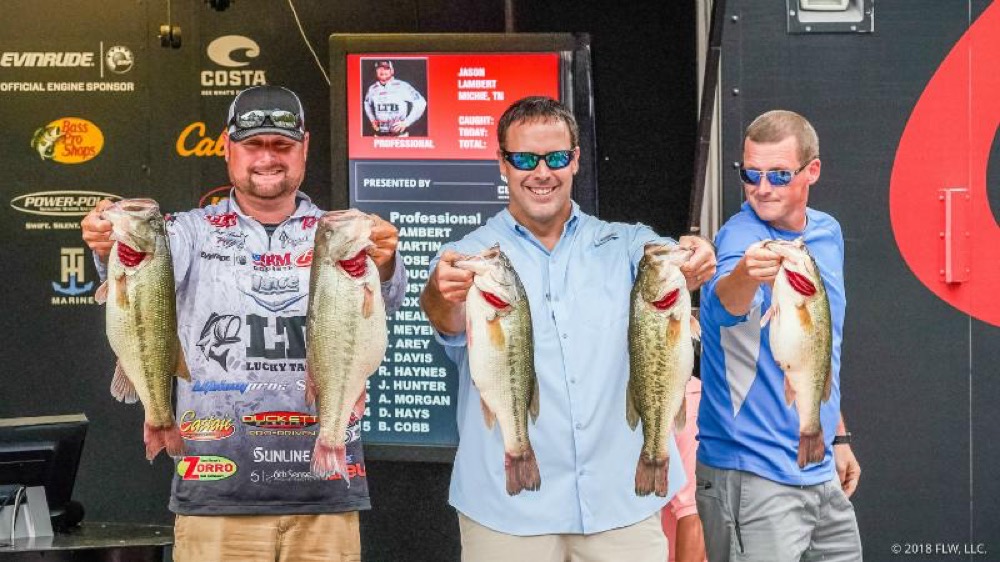 Lambert trailed Day Two leader Randy Haynes by 2 pounds, 4 ounces, starting today’s competition, but gained his massive lead after Haynes, in an unprecedented move, decided to withdraw himself from the competition.

Shortly after takeoff, Lambert and Haynes both arrived on the same area – a well-known community hole at the north end of the lake, and a spot that both anglers fished on days one and two. Lambert arrived first, and the two anglers fished side-by-side for several minutes. Lambert caught several keepers quickly. Frustrated by the situation, Haynes chose to leave the area, return to the ramp and withdraw from the event. Haynes finished the tournament in 12th place and received $12,000.

Lambert ended up catching a limit from the area, but landed an additional three largemouth – including a 9-pounder – at his next stop that upgraded him past the 30-pound mark.

“I actually found those fish [at the second location] yesterday afternoon. It’s a place that I’ve fished in the past, but I hadn’t seen them there [this week] until I pulled up on them and they were eating some gizzard shad,” said Lambert, who was also crowned champion when the FLW Tour last visited Kentucky Lake in 2016. “I hadn’t caught anything there, but when I saw that happen I knew there were some fish down there.”

Lambert said he used 5- and 7-inch Castaic Jerky J soft jerkbaits on a Scrounger Head jig to catch his fish, a bait he’s relied on all week. It’s also the exact lure that caught the bulk of his weight in 2016.

“I probably wouldn’t have gone to my second area this morning had I not caught a good limit early on,” said Lambert. “I had around 20 pounds when I left the first spot, so I went there and idled over them and found that there were more fish down there than I thought. I got a couple 5-pounders and was done after I caught the giant.”

The Tennessee pro said he plans to go out Sunday and finish strong, even with his commanding lead.

“I’m going to start out tomorrow at the second stop from today. If I can catch two or three good ones in the morning, we’re going to have some fun and try and break the 100-pound mark.”

The top 10 pros advancing to the final day of competition on Kentucky Lake are:

Finishing 11th through 30th are:

Ronny Webb of Dyersburg, Tennessee, won the Co-angler Division and $25,000 Friday with a two-day total of nine bass weighing 26 pounds, 14 ounces, followed by Stephen Crawley of Bush, Louisiana, who finished in second place with eight bass totaling 25-4, worth $7,600.

In FLW Tour competition, pros and co-anglers are randomly paired each day, with pros supplying the boat, controlling boat movement and competing against other pros. Co-anglers fish from the back deck against other co-anglers. The full field of anglers competed in the two-day opening round. Co-angler competition concluded following Friday’s weigh-in, while the top 30 pros based on their two-day accumulated weight advanced to Saturday. Only the top 10 pros now continue competition Sunday, with the winner determined by the heaviest accumulated weight from the four days of competition.

The total purse for the FLW Tour at Kentucky Lake presented by Costa Sunglasses is more than $930,000. The event is hosted by the Kentucky Lake Convention & Visitors Bureau.

Prior to the weigh-in Sunday, FLW will host a free Family Fishing Expo at Kentucky Dam State Park from noon to 4 p.m. The Expo is the perfect opportunity for fishing fans of all ages to meet their favorite anglers, enjoy interactive games, activities and giveaways provided by FLW sponsors, meet characters from the “Paw Patrol” children’s television show, and learn more about the sport of fishing and other outdoor activities.