If you’re looking for insight on what to expect at the Bassmaster Elite Series event on Lake Hartwell this week, you might want to stop by Ralph Hayes Toyota – South Carolina’s most long established Toyota dealership, located three minutes from Hartwell’s shoreline. 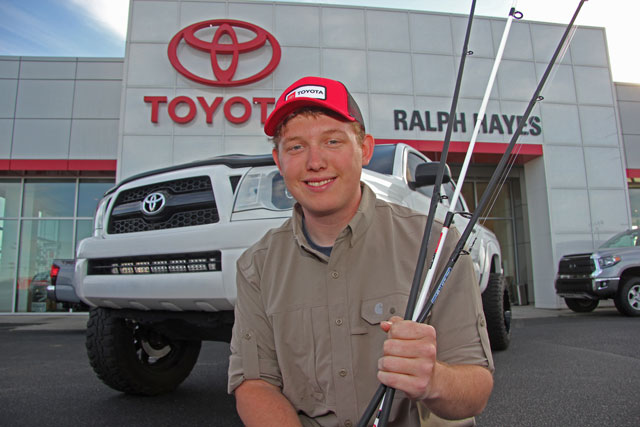 Once you get there, ask for Colton. You won’t find him in a front office, but instead let your ears lead you to the back of the building where you’ll hear the roar of the industrial power washer 18-year-old Colton Turner uses to detail vehicles in order to pay for the white 2007 Tacoma he bought.

“It’s my baby,” he’ll tell you of his Tacoma. And the former angler from the B.A.S.S. sanctioned Palmetto Boat Center High School Trail will also tell you anything you need to know about fishing on Lake Hartwell. As a high school angler, he qualified for the State Championship four straight years.

“Oh, there’s no doubt, bass fishing is very much a part of the family culture here at Ralph Hayes Toyota,” says Stan Hill, the dealership’s Director of Training. “And when anybody wants to know about how to catch a bass on Hartwell around here, they just ask Colton.”

So we did. We asked Colton what B.A.S.S. fans could expect on Hartwell this week, and here’s what he had to say.

“I think you’ll see a lot of guys fishing a jig around boat docks or targeting pre-spawners with a crankbait out there in 15-feet of water,” says Turner. “There are definitely bass spawning here, the water temp is right around 60 degrees, but guys who don’t want to spend a lot of time trying to catch fish off beds will probably try to catch quality fish of docks with a jig.”

You can also count on spinning rods linked to wacky-rigged soft stick baits to get major playing time around Hartwell’s docks this week.

“We had a big team tournament here last weekend with 52 teams that know the lake well and 16 pounds won it,” says Turner. “But the thing that surprised me most is we saw fish schooling on the surface even though the water temp is barely 60 degrees. So don’t be surprised if somebody weighs fish this week throwing a topwater or small swimbait at schooling fish if they’re fortunate enough to see that kind of activity,” warns Turner.