Leveraged by the magical fate of a few good topwater and drop shot bites on Lake Hartwell seventeen months ago, Caleb Sumrall went from a recently laid-off father of two, to a B.A.S.S. Nation National Champion, and then the last guy invited to join the Bassmaster Elite Series. 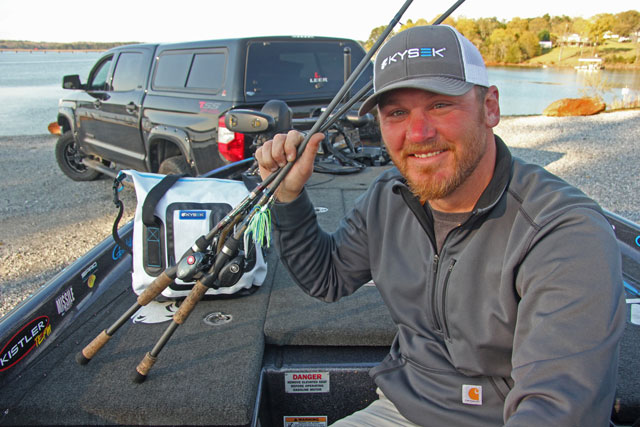 “At one afternoon weigh-in here on Hartwell back in October, 2017, I went from thinking I might finish second, have to sell my boat, and hurry to find a new job, to being a National Champion and a 2018 Bassmaster Classic qualifier, with a chance to start the pro career I’ve dreamed about forever,” says the highly likeable and humble, 31-year old from Southern Louisiana.

Now in his sophomore season, this week marks the third time he’s made the 12 hour drive from home to Anderson, SC to chase a dream and Hartwell’s black bass population.

“It was definitely a little nostalgic when I pulled in here for the first day of practice Monday. I obviously got a good vibe, this lake will always be special to me, but because it lacks hydrilla and hyacinth matts, it’s way different than home,” grins the former oil field service yard manager.

When he won the B.A.S.S. Nation Championship here, his practice was by no means rich with bites, and neither was the first day of practice on Hartwell this week.

“In the 2017 Nation Championship, I had five total bites in three days of practice. I’d see fish schooling on the surface and log a waypoint, and I found some brushpiles, but I wasn’t exactly full of confidence going into the tournament,” he remembers.

“This Monday wasn’t real good either, but Tuesday was better, the fish are moving shallow to spawn and shallow water fishing is my strength, so my confidence is building,” he says.

Water temps are ranging from 55 to 65 on Hartwell, and Sumrall predicts wacky-rigged soft plastics, small soft plastic swimbaits, spinnerbaits, and shallow crankbaits like Spro’s Rock Crawler will be major players this week.

Life is good for Sumrall right now. He’s fishing for a living less than two years after losing a “regular job”, but financially it’s still a strain.

“I guide on Toledo Bend and Rayburn with Darold Gleason when I’m not out on the Elite Series tour, and I’m grateful for it. But man, I’d like to get to a point financially where I could be with my wife and two kids way more when I’m not out here on the road,” says Sumrall, understandably.

If Sumrall’s sentimental history here at Hartwell shows itself this week, the $100,000 first place prize could alleviate a whole lot of strain, and change his life for the better once again at this gorgeous South Carolina reservoir.